Death by banana peel? Black hole? The science behind your most absurd nightmares.

A new book investigates the lighter side of death 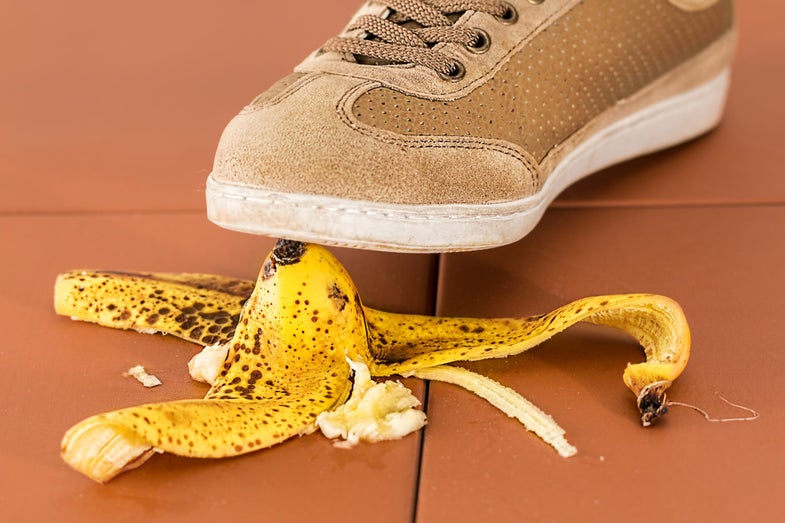 Death. You know it’s coming, at some point, but do you really want to talk about it? If it’s your own death, probably not. But someone else’s death? Better yet, someone else’s totally hypothetical, totally bizarre death?

You know you want all the details.

That’s the basis behind everything from bloody CSI-style shows to cozy murder mysteries. But is there any real science behind those imaginary (and imaginative) deaths?

Yes. And quite a lot of it. A new book called And Then You’re Dead explores what would happen to your body if you vacationed on Venus, got sucked into a black hole, or slipped on a banana peel.

As someone who has had the misfortune of encountering a banana peel on a darkened street late at night, and managed to survive, I was intrigued.

“The banana peel is remarkably slippery, more so than even ice. The cartoons had it really right,” says Cody Cassidy, a co-author of the book. If you slipped on a banana peel and didn’t manage to break your fall before your head slammed into the ground, you could easily die. “It turns out these banana peels are totally lethal objects hiding in plain sight,” Cassidy says.

Cassidy and his co-author Paul Doherty—senior staff scientist at San Francisco’s Exploratorium Museum—spent months digging into the most ridiculous ways that people could die, figuring out step-by-step what would happen to the human body in the most absurd situations.

“It was so much fun,” Doherty says. “We would sit down and brainstorm ways that people could die.”

It sounds gruesome, but it turns out there is a whole lot of science you can explain when you’ve got an attention-grabbing subject like death to whet the appetite. Sometimes literally over the dinner table.

“I have a lot of nerdy friends, so those sorts of conversations are normal for dinner,” Doherty says. Both authors ran their research by a huge variety of friends and family, not only to gauge reactions, but also to gather ideas.

“Plenty of questions came from other people. I think my grandma came up with a rotten food one,” Cassidy says. “They’re questions that people have always asked themselves and never really gotten an answer to.”

“In something of a strange way it was maybe a little cathartic,” Cassidy says of the experience of facing down scenarios straight out of people’s nightmares. In their research they tried to find accounts of people who had encountered those dangers and survived (going over Niagara Falls in a barrel, sticking a body part in a particle accelerator that was turned on, etc).

Doherty was able to pull from personal experiences for a few parts of the book, including a section about what would happen if the windows blew out of your plane in mid air. As a member of the Air Force, he’d been through a training exercise dealing with precisely that nightmare.

There were some ideas that just didn’t make the cut. Morbid fascination can’t overcome some of the most disturbing aspects of death, and things that would strike too close to home for many people (car wrecks, heart attacks) were nixed quickly.

Others turned out, upon investigation, to be far too gruesome to include. “We spent some time trying to make fire palatable, and it there was just no way—so we threw it out,” Cassidy says.

Another one that got axed was death by chlorine trifluoride, a chemical that can light glass and sand on fire. Doherty says that they found the chemical could liquify your bones, destroy your nerves, and leave you a pile of goopy flesh.

“We decided that was too much,” Doherty says.

If you haven’t gotten enough of death, read an excerpt from the book, “What would happen if you got sacrificed into a volcano?” here.