The findings reveal more about how light warps around black holes. 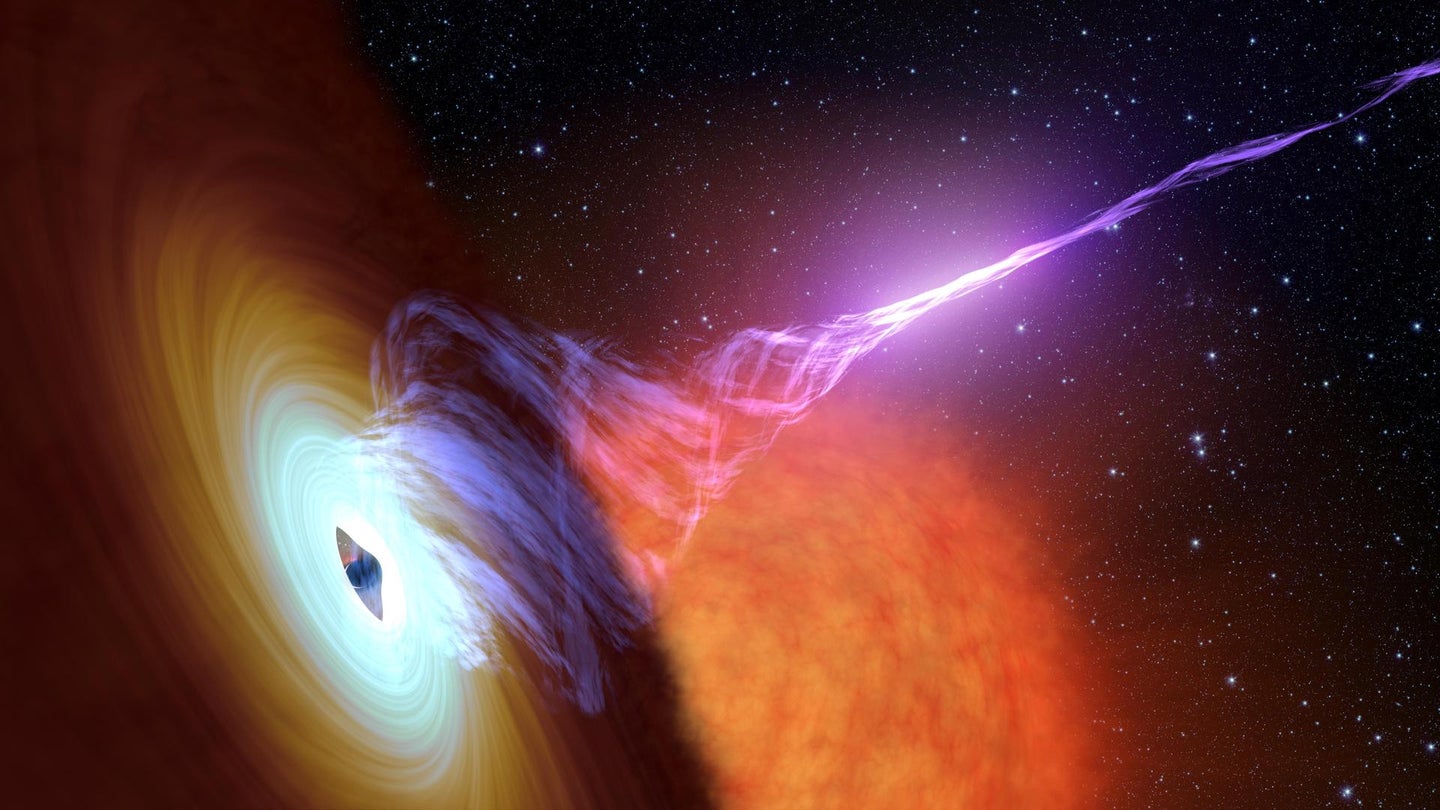 For the first time, scientist's have been able to see x-rays from the dark side of a black hole. NASA/JPL-Caltech
SHARE

Detecting strong X-ray flares beaming from the center of a black hole is nothing new. But detecting light signals from behind one is a different story. That’s because the force of gravity in a black hole is so severe that nothing that goes in can come out. No scientist has managed to find light from beyond—until now.

In contrast to what their name implies, supermassive black holes can be one of the brightest sources of continuous light in the universe. Their extreme gravitational pull brings in all kinds of material that manifests as a bright ring, or corona, around the so-called event. Little is known about supermassive black hole coronas, so scientists turned to black hole I Zwicky 1, which lies 100 million light-years from Earth, to investigate the beams shooting out.

[Related: Black hole jets got some stellar glam shots thanks to this giant telescope]

They detected smaller X-ray “echoes” around the supermassive black hole, in addition to the expected flares. The light signature of these pulsing beams indicated that they were the same X-ray flares, but reflected from the back side—meaning the supermassive black hole’s gravity must have actually warped space-time, thus bending the beams around in a direction then detectable by specialized telescopes. The findings, published in Nature, support a key prediction from Einstein’s theory of general relativity.

Back in 1915, Einstein described the way light could be expected to bend around supermassive black holes. But “fifty years ago, when astrophysicists starting speculating about how the magnetic field might behave close to a black hole, they had no idea that one day we might have the techniques to observe this directly and see Einstein’s general theory of relativity in action,” said Roger Blandford, an astrophysicist and co-author of the paper, in a statement.

This research is the first to confirm what the renowned physicist predicted more than half a century ago.

“Although we have seen the signature of x-ray echoes before, until now it has not been possible to separate out the echo that comes from behind the black hole and gets bent around into our line of sight,” Edward Cackett, an astronomer at Wayne State University who was not involved with the study, told Technology Review. “It will allow for better mapping of how things fall into black holes and how black holes bend the space-time around them.”

Black holes are one of the universe’s biggest mysteries, literally and figuratively. Getting a glimpse of the far side of a black hole is a monumental step for astrophysics, and leads scientists one step closer to unlocking their mysteries, like how they grow, how they take in and release energy, and how they help galaxies form around them.

“We are learning how to use these echoes…to reconstruct an image of the extreme environment just outside the black hole,” Dan Wilkins, an astrophysicist at Stanford University and the lead author of the study, told VICE.

Of course, imaging of this caliber requires powerful instrumentation. These x-rays were detected with the use of two specialized telescopes: NASA’s NuSTAR, and the European Space Agency’s (ESA) XMM-Newton. The ESA is working on a new x-ray observatory, Athena, that will hopefully provide astrophysicists more chances to see behind these black holes with unprecedented resolution.

“If you want to understand how galaxies form,” Wilkins told Technology Review, “you really need to understand these processes outside the black hole that are able to release these enormous amounts of energy and power, these amazingly bright light sources that we’re studying.”

Correction July 30, 2021: A previous version of this article misstated the year Einstein published his theory of general relativity. It was published in 1915, not 1963.