Distant Black Hole Wakes Up To Grab A Light Snack

Later this year, the black hole in our own galaxy will do the same, munching on a passing gas cloud. 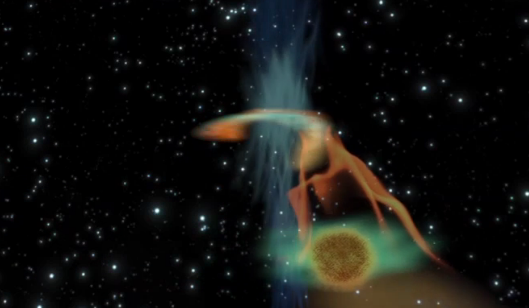 A normally quiet black hole woke up to snack on a super-Jupiter, seen in this screengrab from a computer simulation. ESA
SHARE

Astronomers have spotted a black hole wake up from a decades-long nap to munch on a small passing object, maybe a brown dwarf or a super-Jupiter. For astronomers, it’s a preview of a similar feeding event that will happen later this year in our own galaxy.

The black hole in this new example is in the galaxy NGC 4845, located 47 million light years away. It’s about 300,000 solar masses, so a decent-sized black hole. Astronomers weren’t even looking for it–they were using the European Space Agency’s Integral satellite to look at a different galaxy, and noticed a bright X-ray flare coming from this one, which is normally pretty quiet. They checked it with the Swift satellite, an International Space Station X-ray monitor, and the XMM-Newton black hole hunter, and noticed the galaxy had brightened by a factor of 1,000 in January 2011.

“The observation was completely unexpected, from a galaxy that has been quiet for at least 20–30 years,” said Marek Nikolajuk of the University of Bialystok, Poland, lead author of a new paper in Astronomy & Astrophysics.

They determined the X-ray emission came from a halo around the black hole, as it shredded an object about 14 to 30 times the size of Jupiter. It might have been a small brown dwarf, a failed star not big enough to fuse hydrogen, or it could have been a huge Jupiter-like gas planet. Whatever it was, it’s not anymore, having been torn apart by the black hole.

Incidentally, this serves as a sort of preview for a similar event that will happen in our own neighborhood this year. The black hole at the center of the Milky Way is about to swallow a passing gas cloud.

Astronomers hope to get a glimpse of the action with optical and radio telescopes, especially the newly inaugurated Atacama Large Millimeter/submillimeter Array. ALMA, an installation of 66 radio antennae in the Chilean Andes, can detect the faintest whispers of material in our universe. It would be able to see the gas spinning around the black hole and falling in.

Scientists think the gas snack will happen later this year, explained Paul Ho, an astronomer at the Harvard/Smithsonian Center for Astrophysics and director of the Academia Sinica Institute of Astronomy and Astrophysics in Taiwan. I met him at the ALMA inauguration, and he told a group of space journalists about his proposal to watch the action with the giant radio array.

“People have been working the optical, and they can trace the motion. You can actually see stars moving around the center of the black hole system in the Milky Way, and in their measurement of the stars, they notice a blob of gas which is moving,” he said. “They track it in time, and they see it heading toward the center, so they can track what the orbit looks like. We are very excited about that; we can see it.”

Stay tuned–that should be pretty spectacular.