What Gives A Black Hole Its Giant Flare?

It's all about the corona 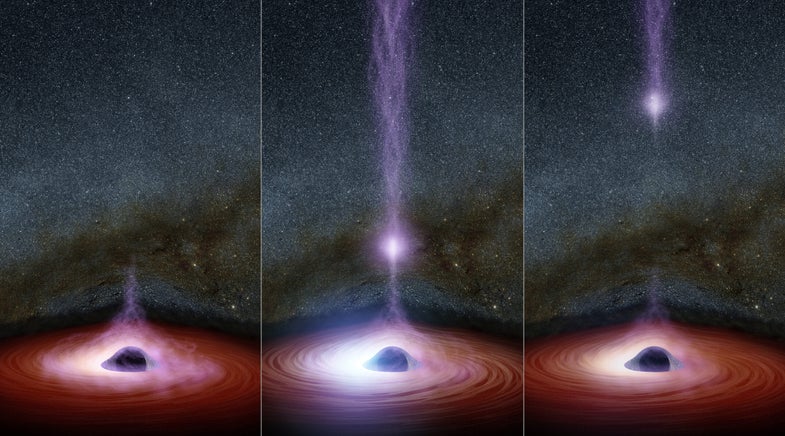 Telescopes have captured black hole flares in the past, but what causes the flares has been a mystery. Now, NASA scientists have confirmed for the first time that a supermassive black hole’s x-ray flare was caused by the ejection of its corona.

The conclusion comes from observations made by NASA’s Swift Observatory and the Nuclear Spectroscopic Telescope Array (NuSTAR). Swift watches for gamma ray and x-ray outbursts, and in doing so, spotted a big flare coming from the supermassive black hole known as Markarian 335 in September 2014. After that, NuSTAR focused its attention on it to catch the end of the flare. After analyzing the data gathered by Swift and NuSTAR, scientists determined they had caught a glimpse of the black hole’s corona ejecting and collapsing.

“This is the first time we have been able to link the launching of the corona to a flare,” Dan Wilkins of Saint Mary’s University in Halifax, Canada, and lead author of a new paper on the results said in a statement. “This will help us understand how supermassive black holes power some of the brightest objects in the universe.”

This is a big step forward to understand more about black holes, but other mysteries remain: like, what causes a black hole to eject its corona.