At 6.6 Billion Suns, The Largest Black Hole Ever Measured Could Swallow Our Solar System

A universal heavyweight champion was crowned this morning at the 217th meeting of the American Astronomical Society in Seattle: A... 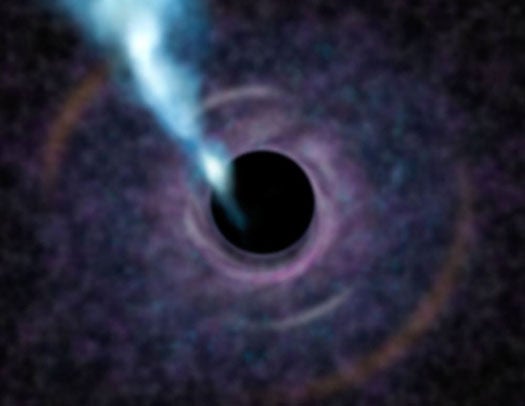 Artist's concept of what a future telescope might see in looking at the black hole at the heart of the galaxy M87. Clumpy gas swirls around the black hole in an accretion disk, feeding the central beast. The black area at center is the black hole itself, defined by the event horizon, beyond which nothing can escape. The bright blue jet shooting from the region of the black hole is created by gas that never made it into the hole itself but was instead funneled into a very energetic jet. Gemini Observatory/AURA illustra
SHARE

A universal heavyweight champion was crowned this morning at the 217th meeting of the American Astronomical Society in Seattle: A giant black hole weighing a staggering 6.6 billion suns accepted the title of the most massive black hole for which a precise mass has been determined.

That’s not to say it’s necessarily the largest black hole in the universe by any means, but in this neck of the cosmic woods we haven’t measured a bigger one. Located at the heart of the galaxy M87 some 50 million light years away in the direction of Virgo, the black hole is so big it could swallow our solar system hole easily. Its event horizon–the boundary at which nothing, not even light, can escape the monster’s gravitational pull–is four times as large as the orbit of Neptune, our sun’s outermost planetary satellite.

Previous estimates of M87’s black hole mass registered at some 3 billion suns, still 1,000 times the size of the Milky Way’s welterweight black hole. The new measurements were acquired using the adaptive optics capabilities on the 26.6-foot Frederick C. Gillett Gemini Telescope on Mauna Kea, Hawaii, which can compensate for the distorting effects of Earth’s atmosphere. This allowed astronomers to gauge just how fast the stars in M87 are orbiting the black hole, and from that they could determine the mass.

If one simply compares the old measurements of M87’s black hole to it’s current massive size, it might beg the question: Is M87 juicing? Indeed, astronomers think the black hole did get some outside help beefing up over the course of its lifetime. Aside from feasting on gas and stars, M87’s champion is likely the result of a series of black hole mergers, the last of which may have happened in the not too distant past.

Whether M87’s black hole achieved its mass fairly or not, it may not hold the heavyweight title for very long anyhow. Over the next decade astronomers plan to hook up telescopes all over the world to create a whole Earth submillimeter array that will vastly increase their ability to locate event horizons and characterize the size of black holes throughout the universe.

We’d be surprised if there wasn’t some young black hole out there right now devouring its surroundings and merging with smaller counterparts in hopes of one day unseating the champ.