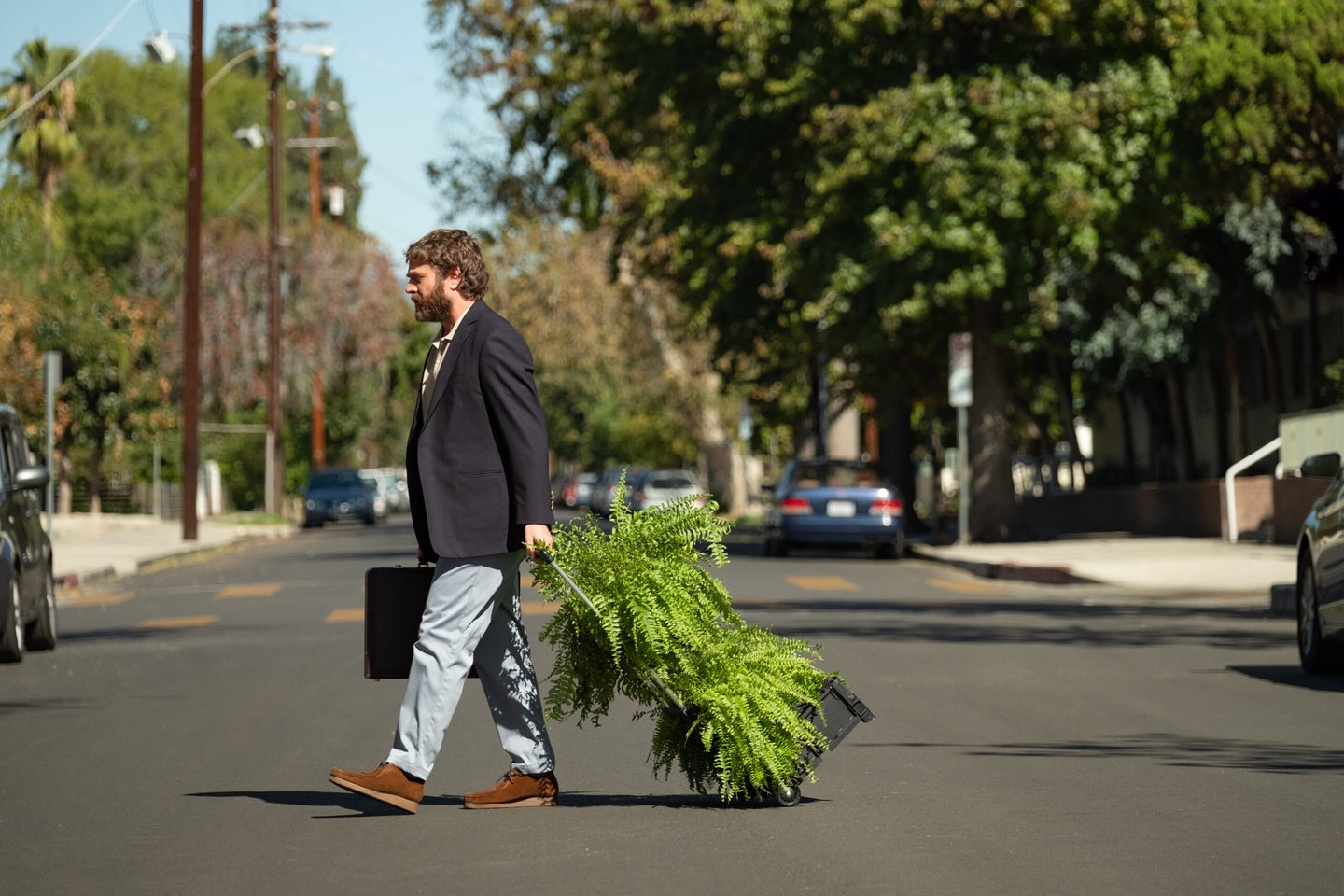 The biggest truth bomb in Between Two Ferns: The Movie comes in the first minutes of the mocu-mentary, when Zach Galifianakis, playing his boorish self, trades jabs with Matthew McConaughey, playing his cool, Lincoln-cruising self.

“I’ve got three kids; I’ve got a wife,” McConaughey says at the height of the ill-fated interview. “What have you got, besides two ferns?”

Galifianakis doesn’t have a comeback—the ferns are his greatest friends and possessions. They represent his dream of leaving public-access TV to host a late-night talk show that people will love him for. But to win the contract from a Murdoch-esque Will Ferrell, he has to travel the country to film 10 more celebrities, including Paul Rudd, Tiffany Haddish, Peter Dinklage, and Chance the Rapper.

Of course, wherever Galifianakis goes, so does his greenery. For the first time in Between Two Ferns history, we see the eponymous plants venture out of the studio, from Chicago, to Kansas, and finally to stifling Los Angeles. Which makes us curious: With all that mileage, how do the fronds stay looking so gorgeous?

We asked our burning fern questions to production designer Susie Mancini, who joined Galifianakis’s crew for the movie.

Are the ferns real?

Mancini confirms that the majority of the ferns in the film are all-natural. “Real plants look much better on camera,” Mancini says. “Fake plants move in a different way; they catch light differently. It would take away from the reality and also the joke.” The only exceptions are the ferns in the Matthew McConaughey scenes. As the trailer reveals, the interview ends with a pipe exploding in the studio—nearly drowning the actors and the plants. So, the designers went with plastic props: unlike seaweed, ferns don’t hold up well under 10 feet of water.

How many ferns are there, really?

Not that it’s a big secret, but there are way more than two ferns in the movie. Mancini says her team kept a roster of 10 Boston ferns at the ready wherever they traveled, in case one was looking under the weather or met an untimely demise. “Sometimes we made Frankenstein ones by cutting off dead parts and attaching new leaves,” she says. “They couldn’t always keep up.”

It took thorough vetting to select each leafy cast member. Mancini and her colleagues would tour local nurseries to find plants that matched the exact measurements, structure, and color profile they desired. “We had to keep it classic—the iconic look on black with two pops of green,” she says. Sometimes, the process took weeks.

What kind of ferns star in the film?

The main species that we see in both the web series and the movie is the Boston or sword fern. It’s a tropical plant, originally found throughout the Americas, Africa, Polynesia, and the West Indies, so it isn’t native to the tiny North Carolina town where the show is filmed. That said, its adaptive, easygoing nature makes it a popular ornamental plant in many places, including the homes of well-to-do Bostonians during the early 1800s (hence, the common name). The ferns can grow to up to three feet wide and seven feet tall if treated with proper respect.

There are a few scenes where Mancini had to sub in a doppelgänger fern, like when Galifianakis sits down with David Letterman. “We couldn’t find the right species in upstate New York; I was freaking out,” she says. “Then we came across another amazing fern outside the boutique hotel we were at. It had smaller leaves, but I don’t think you will notice.”

When Mancini nabbed the job, she dove right into researching “the weird world” of ferns. But she learned plenty more along the way, as she and the crew consulted with nursery experts to create specific water, soil, and sun regimens for each filming location. They even bought portable humidifiers for the plants.

The designers also had to custom build a double-decker trolley for Galifianakis to tote his ferns around in the movie. Sometimes the actor would put them in the front seat of his SUV; sometimes he’d lay them down in the extra bed in his hotel room. “They’re like a character, a real person,” Mancini says.

And while she appreciated the humor of the ferns on set, she doesn’t think she can ever put one in her home. “They stressed me out; they became an obsession,” Mancini explains. They might look low maintenance on screen, but as with celebrities, it takes an army to meet their long list of demands.