When galaxies rip each other apart, they leave an explosion of bright baby stars. 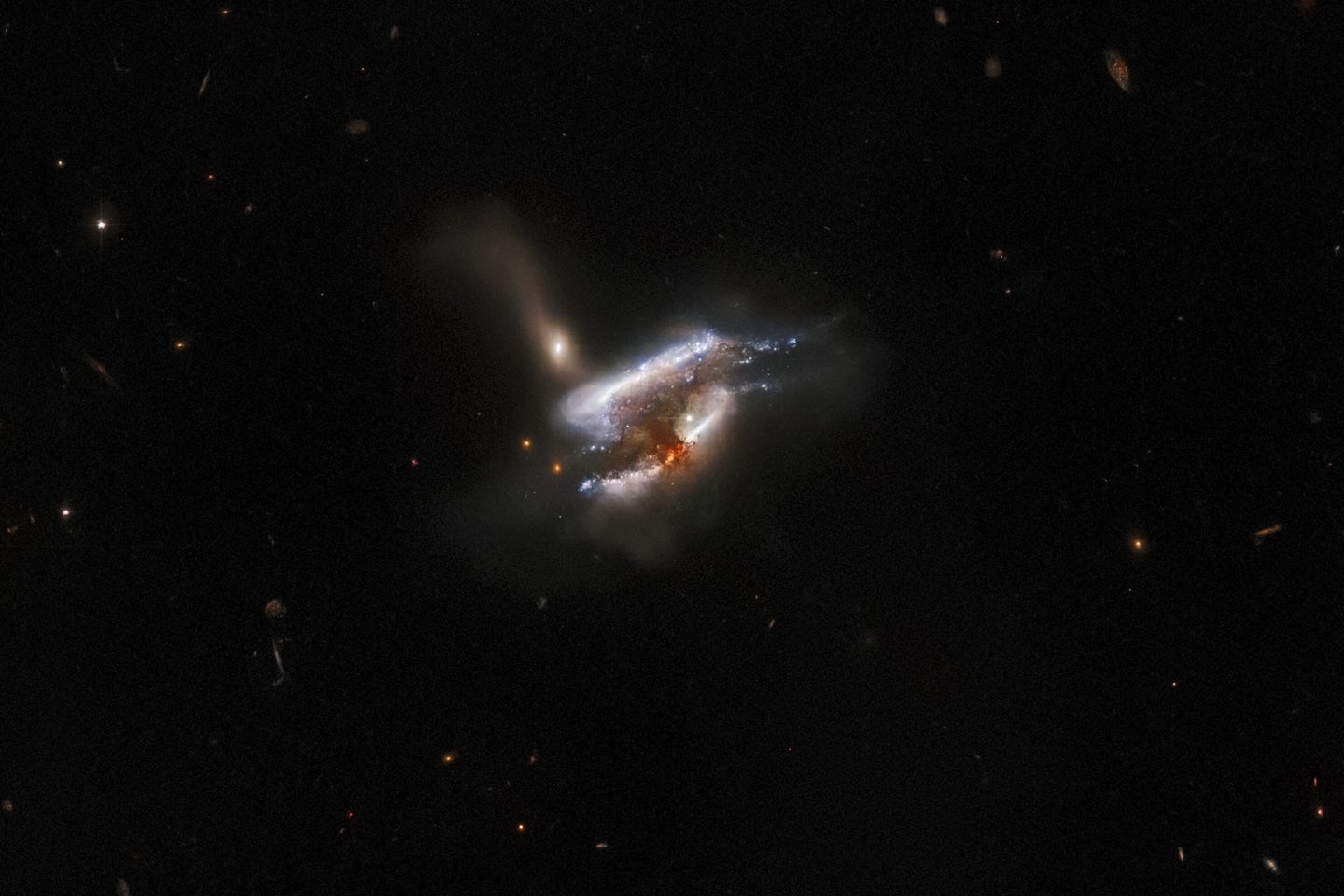 Sometimes gravity unifies galaxies; sometimes it creates strife. But documenting these paradoxical processes is always a feat, even in the age of advanced space telescopes and astronomical modeling.

On February 14, NASA and the European Space Agency (ESA) posted a Hubble image depicting three galaxies swirling into one. The newborn formation is located 681 million light-years away from Earth in the Cancer constellation. The gravitational force of the triple merger is so intense, it’s packing dust into new stars and causing bulges in the galactic cloud (an effect known as tidal distortion).

Mergers are a common way for galaxies to grow and shape stars in disparate conditions. (The Milky Way as we know it is likely a result of a merger, based on the massive hump at its center.) The events can either be “gas wet,” meaning the parties involved are cold and gassy, or “gas dry,” where the bodies are older and have used up their gases. Wet mergers have a higher rate of star formation, and often birth bright, elliptical galaxies.

The merger that Hubble spied in the Cancer constellation has been in progress for more than a century. Labeled IC 2431, it was first discovered in 1896 by French astronomer Stephane Javelle who used a much smaller ground telescope. Though he identified it as a quadruple merger, NASA and ESA researchers think there are three galaxies in the gaseous churn.

Meanwhile, 5,000 light-years away in the Rosette Nebulae, a collision between two passing galaxies is leading to “a firestorm of star formation.” On February 22, NASA and the ESA posted a Hubble shot of the ancient galaxy NGC 2444 yanking at the spiral galaxy NGC 2445 during an eons-long driveby. As NGC 2444 lumbers along, its massive gravitational field is teasing out NGC 2445’s gases, creating a trail of young blue stars. The newborn stellar masses rest at the heart of the smaller galaxy, and are estimated to be one to two million years old.

But there’s a dark side to this pairing, too. The Hubble image reveals a web of black gases leaking out from the core of the star birth; its origins and components are still largely a mystery. “Radio observations reveal a powerful source in the core that may be spearheading the outbursts,” the ESA writes in its post. “The radio source may have been produced by intense star formation or a black hole gobbling up material flowing into the center.”

The two space agencies plan to scan the formation again once the James Webb Space Telescope is fully operational. Webb’s infrared-light camera should be able to detect more stars that are shrouded in dust and invisible to Hubble’s decades-old instruments.