And you thought your home was dusty 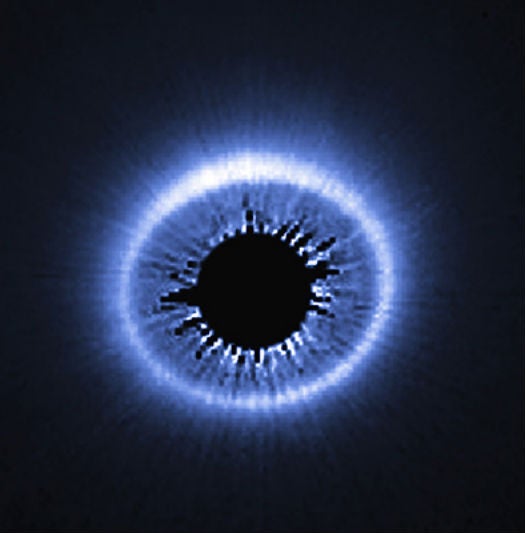 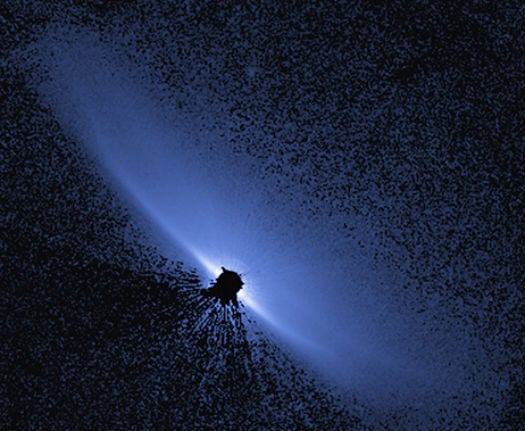 Star HD 32297 surrounded by a disk of dust and debris

NASA’s Hubble Space Telescope has just finished up a pretty extensive imaging survey of the debris surrounding distant stars – and the results look rather fantastic. The images above, snapped by the famous telescope, show various stars encircled by immense disks of dust and debris. The stars appear black, as most of their light has been blocked in order to showcase the blue-ish dust disks.

The stars captured in the survey greatly differed in age – ranging from 10 million years old to a billion years old. The researchers who conducted the survey believe that the debris fields were likely created by the collisions of objects that had been leftover from the formation of planets. “It’s like looking back in time to see the kinds of destructive events that once routinely happened in our solar system after the planets formed,” said survey leader Glenn Schneider of the University of Arizona’s Steward Observatory.

Schneider and his team found that the disks were rich in diversity and complexity, with no two disks looking the same. Originally, astronomers had suspected that these debris fields were pancake-like in shape, but this latest survey revealed that the disks are likely shaped by the gravity of exoplanets orbiting the stars. (Alas, the planets can’t be seen in the images.) “These are actually pretty complicated three-dimensional debris systems, often with embedded smaller structures,” said Schneider.

One star in particular, HD 181327, shown below, had a rather irregular detail in one if its disks: a giant spray of debris that was pretty distant from the host star. Co-investigator Christopher Stark speculated that the spray of material was possibly caused by the collision of two bodies near the edge of the system, an event he said would be very rare. “If we are in fact seeing the recent aftermath of a massive collision, the unseen planetary system may be quite chaotic,” says Stark. It’s also possible that the strange spray is actually a warping in the disk, caused by the host star’s interaction with unknown interstellar material.

Studying these images has given astronomers a much better understanding of the multifaceted composition of the dust and debris fields surrounding stars. Plus, it also gives them insight into one of the topics they explore the most: how our own solar system formed 4.6 billion years ago. In fact, the planetary collision suspected in the disk of HD 181327 may be similar to how our own Earth-moon system came to be. It’s believed that our Moon is actually the amalgamation of debris cast off from the collision of two planet-sized bodies.

The team published their findings in The Astronomical Journal. 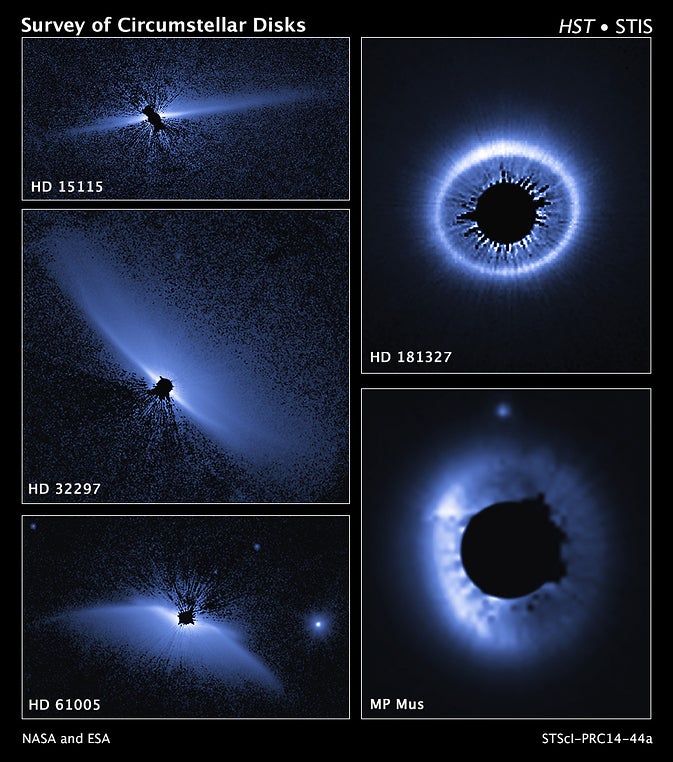