Star formation is now 30 times lower than at its peak 11 billion years ago. 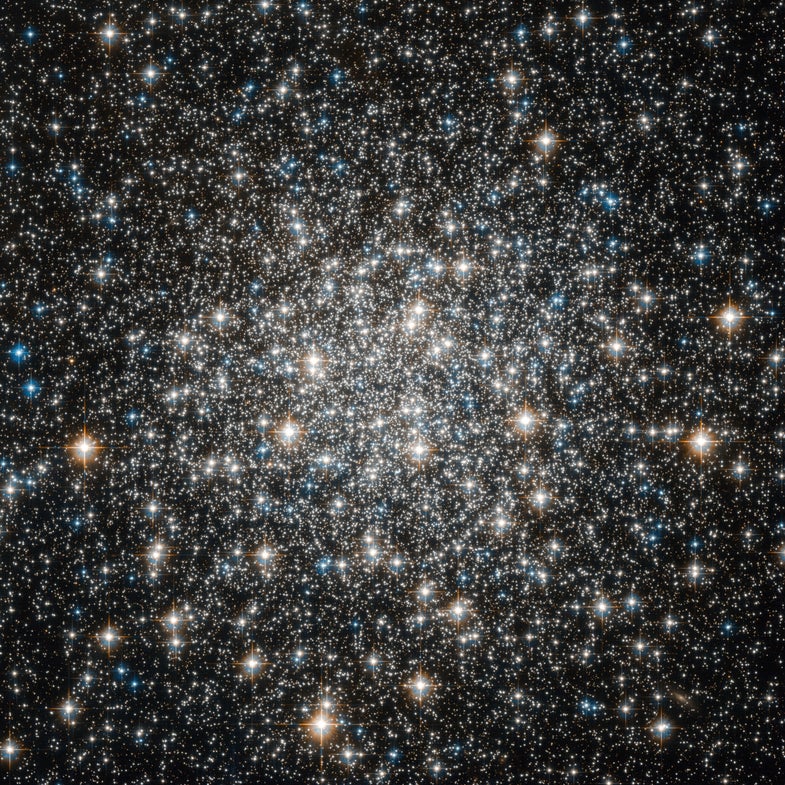 Like many of the most famous objects in the sky, globular cluster Messier 10 was of little interest to its discoverer: Charles Messier, the 18th century French astronomer, catalogued over 100 galaxies and clusters, but was primarily interested in comets. Through the telescopes available at the time, comets, nebulae, globular clusters and galaxies appeared just as faint, diffuse blobs and could easily be confused for one another. Only by carefully observing their motion — or lack of it — were astronomers able to distinguish them: comets move slowly relative to the stars in the background, while other more distant astronomical objects do not move at all. Messier’s decision to catalogue all the objects that he could find and that were not comets, was a pragmatic solution which would have a huge impact on astronomy. His catalogue of just over 100 objects includes many of the most famous objects in the night sky. Messier 10, seen here in an image from the NASA/ESA Hubble Space Telescope, is one of them. Messier described it in the very first edition of his catalogue, which was published in 1774 and included the first 45 objects he identified. Messier 10 is a ball of stars that lies about 15 000 light-years from Earth, in the constellation of Ophiuchus (The Serpent Bearer). Approximately 80 light-years across, it should therefore appear about two thirds the size of the Moon in the night sky. However, its outer regions are extremely diffuse, and even the comparatively bright core is too dim to see with the naked eye. Hubble, which has no problems seeing faint objects, has observed the brightest part of the centre of the cluster in this image, a region which is about 13 light-years across. This image is made up of observations made in visible and infrared light using Hubble’s Advanced Camera for Surveys. The observations were carried out as part of a major Hubble survey of globular clusters in the Milky Way. A version of this image was entered into the Hubble’s Hidden Treasures Image Processing Competition by contestant flashenthunder. Hidden Treasures is an initiative to invite astronomy enthusiasts to search the Hubble archive for stunning images that have never been seen by the general public. The competition has now closed and the results will be published soon.
SHARE

In its youth, the universe was a roiling soup of star ingredients, with new stars forming rapidly. But now it’s much quieter, and things are not expected to get more exciting anytime soon, astronomers say. For the first time, astronomers have figured out the universe’s star-birth rate, and found that today, it’s 30 times lower than its likely peak some 11 billion years ago. As a result, all of the future stars may be no more than a 5 percent increase above what we’ve got now.

Astronomers figured this out by taking snapshots of the universe at 2, 4, 6 and 9 billion years of age. (It’s 13.7 billion years old now.) The results show a clear decline in star-forming activity. A team led by David Sobral at Leiden Observatory studied the universe’s hydrogen-alpha emission line, which is a reliable indicator of star formation. They used Japan’s Subaru Telescope and the United Kingdom Infrared Telescope (UKIRT) on Mauna Kea in Hawaii, and the Very Large Telescope in Chile, covering a huge portion of the sky.

The team’s observing area encompassed the largest sky samples ever, more than 10 times larger than any previous samples. Observing the cosmos at different ages–so at different distances–with the same observational technique provides an apples-to-apples comparison.

It turns out that half the stars in existence now formed more than 9 billion years ago, and it took just 2 billion years to form all of them. The other half took almost five times as long to produce. If this trend continues, the universe will only get 5 percent more stars, even if we wait forever, the scientists say.

“We are clearly living in a universe dominated by old stars. All of the action in the universe occurred billions of years ago,” Sobral said in a statement.

Better go enjoy them while we still can. 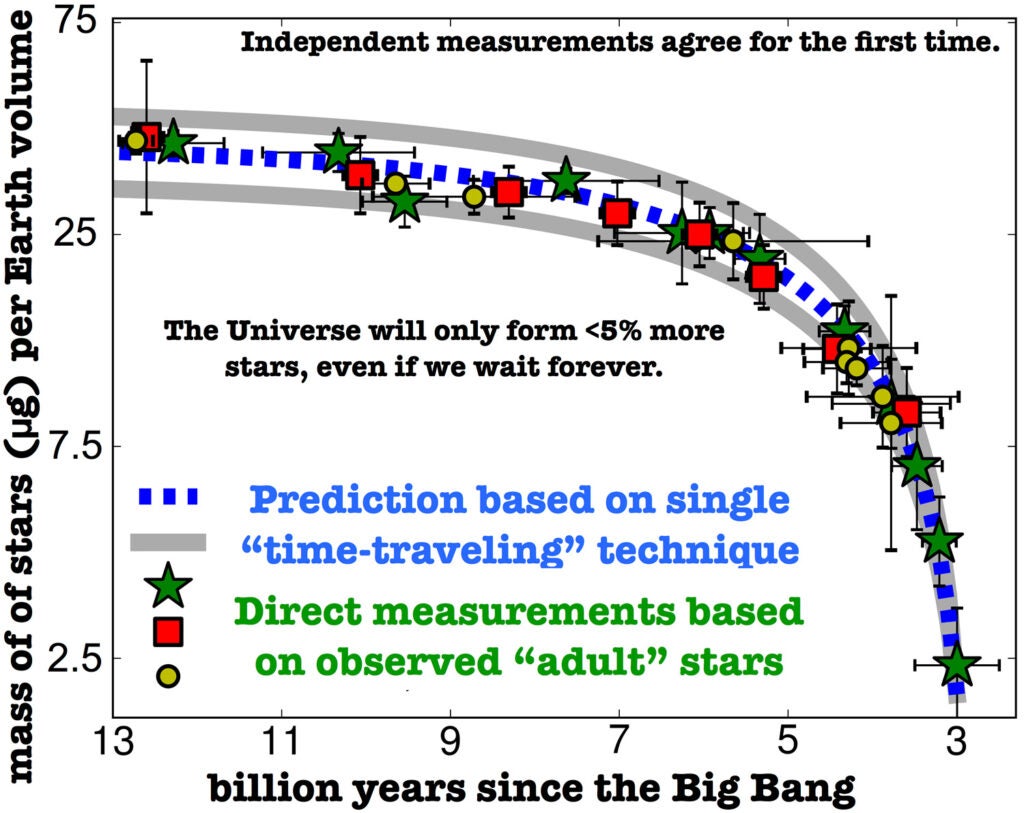 The single method used for tracking and studying galaxies revealed a continuous decline of star formation in the last 11 billion years. By using this method and the derived star formation history of the universe, it is possible to predict the total mass in stars and its distribution in the universe. The prediction fully agrees with independent measurements.