Through the looking glass of general relativity 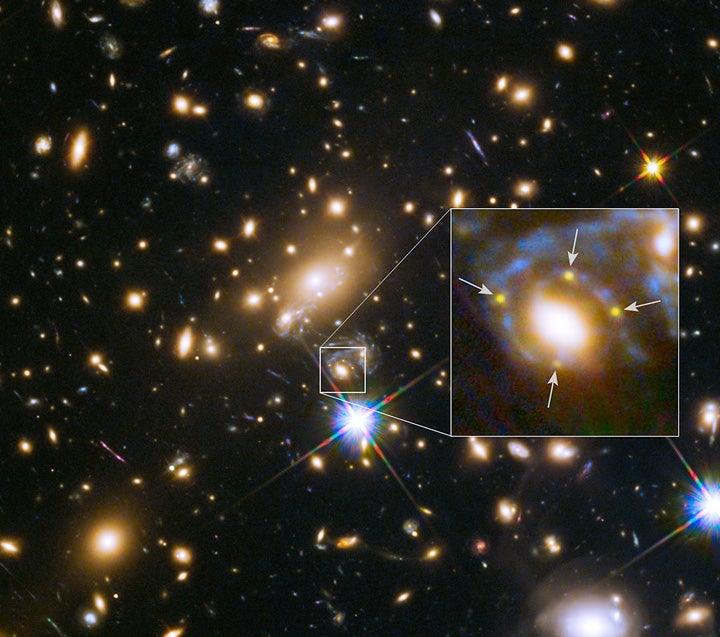 About 9.3 billion years ago, a supernova exploded in our universe. Since then, its light has been traveling the billions of light years it takes to get to our little planet we call home. But in between this supernova and Earth, there happens to be a massive galaxy, within a cluster of galaxies, which has had an interesting effect on the path of the light coming from this exploded star.

Using the Hubble Space Telescope, researchers from the University of California, Berkeley observed the galaxy’s gravitational lensing effect on the supernova’s light. Because the galaxy is so massive, it warps space-time around it, which bends the light as it travels to Earth. As a result, the galaxy creates four separate images of the supernova it its edges—a phenomenon called an Einstein’s Cross.

Since four images arise, it means the supernova is almost exactly behind the galaxy in relation to us. When light from a distant object passes by an extremely massive object, the warped space-time changes the direction of the light, disrupting it from traveling in a straight line. A less-than-perfect alignment of these objects—which occurs most of the time—produces distortion like arcs and filaments. But as the Earth, the galaxy, and the supernova all lie in a line, the light’s path is disrupted perfectly, making it appear in numerous distinct places around the galaxy.

According to Patrick Kelly, the lead researcher on the study published in Science, astronomers have seen numerous distant quasars appear as Einstein’s Crosses, but this is the first time a supernova has appeared in the formation. Within the next five years, the Cross may be replaced by other images of the supernova, distorted into a different configuration by the gravitational lens. That’s because the light from the explosion is taking numerous different paths around the galaxy to reach our eyes.

“There’s sort of staggered arrival of the supernova,” says Kelly. “If you’re trying to get through the city during rush hour, you can take a bunch of different paths to your destination, but it won’t necessarily take the same amount of time. The light from the supernova is travelling towards us in different paths, an it can either go around the cluster or through the middle.”

With these image copies of the supernova, Kelly says they can learn more about the mass distribution within the galaxy, as well as measure the expansion of the universe. By comparing the times it takes for future images of the supernova to appear, scientists can calculate just how massive and dense that galaxy is, as well as how fast our universe is moving outward.