Astronomers using the Hubble Space Telescope have made one of the most detailed dark matter maps ever, taking advantage of... 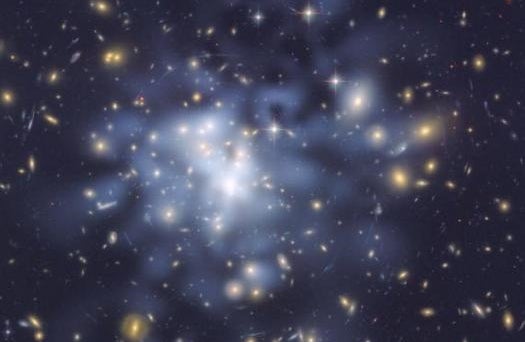 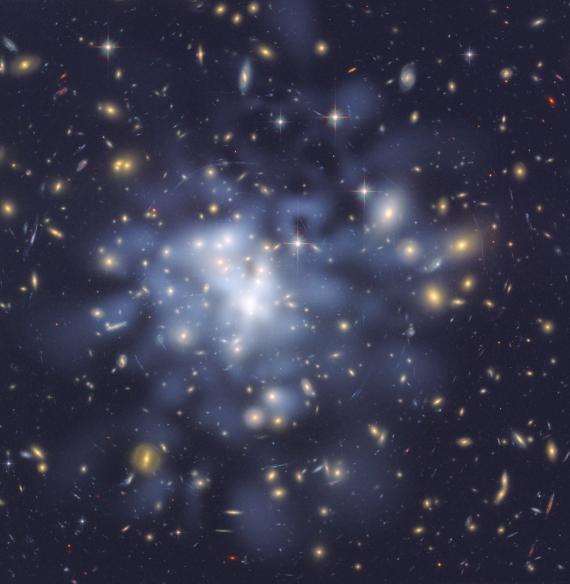 This is one of the most detailed maps of dark matter ever made. The location of the dark matter (tinted blue) was inferred through observations of magnified and distorted distant galaxies seen in this picture.

Astronomers using the Hubble Space Telescope have made one of the most detailed dark matter maps ever, taking advantage of the dark matter’s own gravitational effects to bring it into the light.

The map suggests massive galaxy clusters may have formed earlier than expected, before dark energy stunted their growth, according to the Space Telescope Science Institute.

To measure the dark matter, astronomers used Hubble’s Advanced Camera for Surveys to snap pictures of the galaxy cluster Abell 1689, located about 2.2 billion light-years away. The cluster is so massive that its gravity warps the light from galaxies behind it, an effect called gravitational lensing. Faraway galaxies appear as warped smears or distorted blobs, like you would see in a funhouse mirror. By studying the warped smears, astronomers determined how much mass is in the Abell cluster. (More mass leads to more distortion.) Then they could subtract that from the mass they could see — stars and the like — to figure out the amount of dark matter, and its distribution throughout the cluster.

Dark matter makes up most of the universe, and through gravity, it acts to pull things together. Dark energy, on the other hand, pushes things apart. Astronomers can study this tug-of-war by mapping the distribution of dark matter in galaxy clusters, which formed early in the universe’s history.

The new map says Abell has a lot more dark matter than expected for a cluster of its size, which leads to some interesting questions about the genesis of galaxy clusters. In order to get so big, Abell and similar clusters must have started clumping together much earlier than previously thought, when the universe was still pretty dense.

An upcoming experiment will shed some more light on this problem. The Cluster Lensing and Supernova survey with Hubble (CLASH) survey will study 25 clusters over the next three years for a total of one month of observing time, so astronomers can map their dark matter distributions. The studies could provide more evidence of early cluster formation, and maybe even evidence of primordial dark energy.