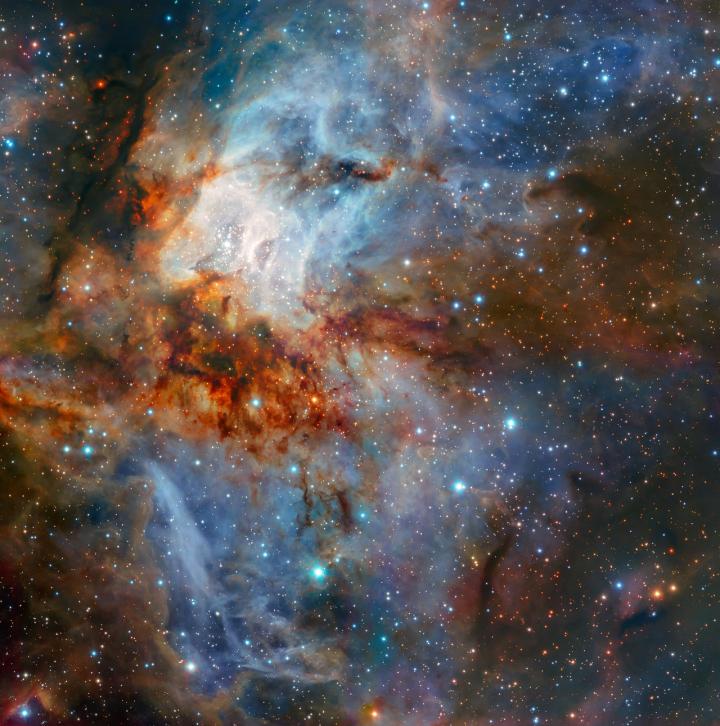 It’s a stellar shot in more ways than one. The picture above shows a star cluster 5,500 lightyears away from Earth, filled with fully-matured celestial bodies and ones still growing up.

This image is false-color, meaning that same expanse, if viewed with a naked eye, would look far different from its current depiction. The colors represent light in infrared wavelengths, which is impossible for humans to see. The snapshot of the star cluster, called RCW 38, is among the sharpest and deepest images ever taken of the area. And it’s not that they caught this particular formation on a good hair (or rather, as good corona) day. A picture like this requires excellent photographic equipment, and this image is no exception.

Koraljka Muzic, a research scientist at the University of Lisbon in Portugal, lead the project. Her team used the Very Large Telescope (Yes. It is Very Large.) in Chile to locate the star cluster. She also used the HAWK-I camera—pronounced hawkeye—and it might be surprising to hear that its only a tad bit more advanced than your DSLR. HAWK-I stands for High Acuity Wide field K-band Imager. It was installed in 2007, and was already pretty great at taking pictures of distant celestial objects. But just recently, scientists installed an upgrade in it called GRAAL. And that upgrade involves lasers.

Even for a powerful camera like HAWK-I, there are limitations to being a ground-based telescope. Namely, the sky. Sure, the atmosphere that surrounds us allows us to breathe, protects us from a lot of solar radiation, and generally plays a huge role in life here on Earth. But MAN is it bad for sky-gazing.

“The atmosphere is turbulent and it blurs our images.” Muzic says. Even on a clear night, atmospheric disturbances can mess with astronomer’s views of stars, blurring and twisting the subject of their photography session. Shifting winds and currents, changes in temperature and density, they all play into the agitated air that gets between a telescope and a perfect view of the sky. Those disturbances are why stars appear to twinkle, even on a clear night.

GRAAL works to counteract that turbulence using a technology called adaptive optics. “Adaptive optics has a real time computer that is calculating the effect of the turbulence on the wavelength,” Muzic says. The computer figures out how much turbulence is distorting the image, and then sends that information to a deformable ceramic mirror, just two millimeters (0.08 inches) thick and 1.1 meter ( 3.6 feet) wide. The thin mirror has 170 actuators behind it, which can push the mirror just slightly, doing the exact opposite of what the choppy sky is doing above. It can adjust these actuators at a rate around 800 times per second, keeping up with the changes in the air itself.

“This allows us to get much sharper images than we could get without adaptive optics.” Muzic says. This image was part of the scientific testing of the new HAWK-I, GRAAL system. It will soon open up to more research opportunities.

In order to make all those tiny, quick adjustments, GRAAL needs a reference point. “For adaptive optics to work, it needs a bright star either inside or very close to your object. But there are not so many bright stars in the sky.” Muzic says. Luckily there’s an alternative. “Another way is to create an artificial star using lasers,” she adds.

GRAAL has four lasers pointing up into the atmosphere. In the upper section, each of these lasers excites sodium atoms, creating a glow bright enough to imitate stars. A computer at the VLT can compare what the lasers are ideally supposed to look like with the turbulent way that they actually appear and make its quick corrections, making the image clearer and sharper.

First proposed in 1953 its only in the past few decades that technology has advanced to the point where adaptive optics systems could be installed at telescopes around the world. Researchers have developed deformable mirrors, like the ones used at VLT, liquid mirrors controlled by magnetic fields, adapted adaptive optic tech to make more advanced microscopes, and yes, captured some beautiful pictures.

But it’s not the aesthetics of the images that they can take that make them so valuable to researchers like Muzic.

Along with the picture came back plenty of data. Muzic’s main research interest is brown dwarfs, objects with characteristics somewhere between a large planet and a small star. They’ve been spotted in star clusters nearby, but Muzic hopes to find some of these faint objects in RCW 38, a more distant star cluster that doesn’t have the same environment of some of the more nearby clusters. She’s currently analyzing the data to see if these faint objects are present in the picture.