Brand-New Supernova Spotted Within Hours, Will Be the Most-Studied Star Explosion Ever

Astronomers just spotted a brand-new supernova mere hours after it exploded, thanks to a robotic telescope and some smart computer... 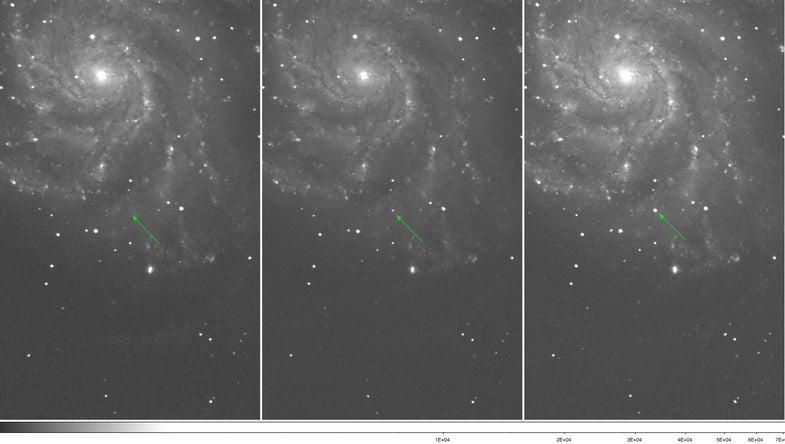 Astronomers just spotted a brand-new supernova mere hours after it exploded, thanks to a robotic telescope and some smart computer algorithms. Now they’re scrambling to use as many telescopes as possible, on Earth and in space, to observe the star’s death throes.

New supernovae are not terribly rare, but this one is unique because it is so close — 21 million light years away — and it’s of a type that is crucial to astronomical measurements. The supernova, PTF 11kly, is the youngest ever detected.

It showed up in the spiral galaxy M101, the Pinwheel Galaxy, a rather large spiral (10 times the size of the Milky Way) located in the constellation Ursa Major, known to its friends as the Big Dipper. It’s a Type Ia supernova, a very bright type that is used for gauging distances among galaxies. The use of Type Ia supernovae as standard candles helped astronomers prove how rapidly the universe is expanding, and led to the discovery of dark energy. So it’s an important type, and the discovery of a super-new, superclose supernova is tantalizing news for astronomers.

The Palomar Transient Factory (PTF) survey, which is designed to observe and discover astronomical events as they happen, spotted the supernova earlier this week, according to a news release from the Lawrence Berkeley National Laboratory. First, a robotic observation system mounted on the 48-inch Samuel Oschin Telescope at Palomar Observatory scans the sky, and feeds data to a supercomputer at Berkeley Lab. The computers use machine learning algorithms to comb through the PTF data and flag interesting astronomical phenomena. Within a couple hours of spotting PTF 11kly, the system sent its coordinates to telescopes around the world so others could check it out, according to LBL.

Three hours later, telescopes in the Canary Islands captured the supernova’s spectral signature, and 12 hours later, astronomers using the Keck and Lick observatories determined it was a Type Ia. This makes the Canary Islands spectra the earliest Type Ia spectra ever taken. Afterward, astronomers sent an emergency request to NASA to use the Hubble Space Telescope, which will observe the supernova this weekend.

Over at Bad Astronomy, Phil Plait describes that Type Ia supernovae occur when a super-dense white dwarf siphons material off a companion star. If the white dwarf siphons off enough material, it can start to fuse hydrogen into helium, and the whole star will explode. This ginormous energy release makes the supernovae very bright, which makes them useful for gauging intergalactic distances. Type Ia are all thought to explode in similar ways, allowing them to be used as standard benchmarks — standard candles in astronomical parlance. (Click through to Bad Astronomy for a full rundown of what this supernova may mean to astronomy.)

In a fortuitous find, astronomers may actually have a picture of the supernova progenitors. Hubble Space Telescope images taken back in 2002 show two red giant stars very close to the location of PTF 11kly, Plait points out. If a white dwarf was nearby, it could have siphoned material from one of those red giants, sparking the runaway fusion event that led to supernova. Follow-up observations will help prove this.

Catching this supernova so early will give astronomers a glimpse into its outermost layers, which will tell them about the exploded star’s characteristics, according to astronomer Andrew Howell of UC Santa Barbara and Las Cumbres Global Telescope Network. “When you catch them this early, mixed in with the explosion you can actually see unburned bits from star that exploded! It is remarkable,” he said in a news release. “We are finding new clues to solving the mystery of the origin of these supernovae that has perplexed us for 70 years. Despite looking at thousands of supernovae, I’ve never seen anything like this before.”

You can see it, too. The supernova is getting brighter every night, and it should be visible with a decent pair of binoculars within the next couple weeks, according to astronomers at LBL and Oxford University. The best time to see it will be just after evening twilight in the Northern hemisphere.