The world’s most thrilling motorcycle race, in photos

Track knowledge can make the difference between life and death during the notorious Macau Grand Prix. 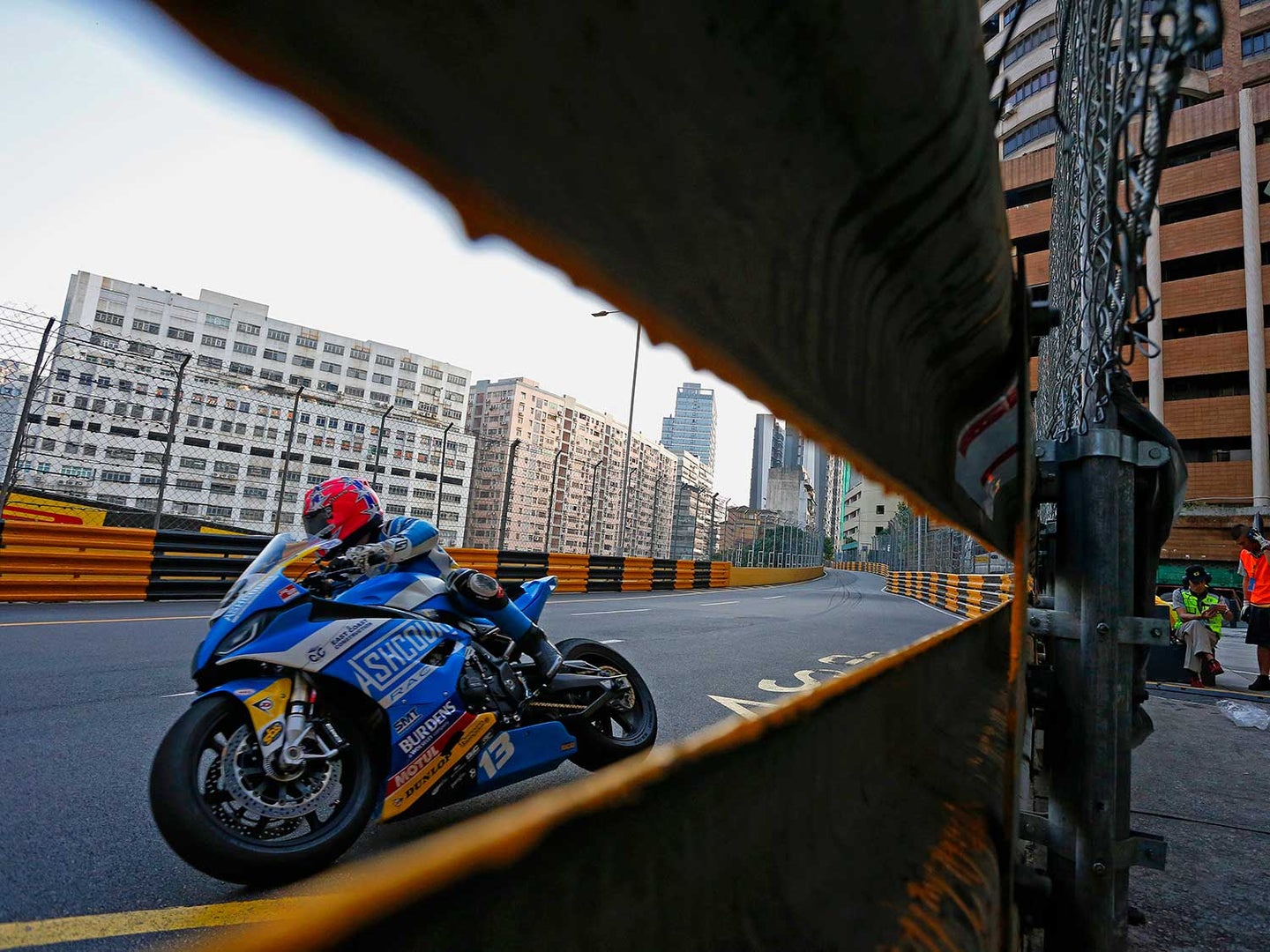 Lee Johnston (BMW Ashcourt Racing) hurtles a short distance from the dreaded Armco barriers, with the city in the background. Diego Mola
SHARE

Macau, China. Luxurious hotels, casinos, and nightclubs merge with gray buildings, European remains, and Taoist temples, in a city full of ideogram signs, and unmistakable smells and sounds. Between all this, a tiny strip of tarmac stretches for 3.7 miles, surrounded by walls and black-and-yellow barriers, creating one of the most fascinating and dangerous circuits in the world.

“Macau is like a labyrinth, a real nightmare for newcomers” is a thought shared by the majority of riders. Treacherous corners alternate with two sixth-gear straights, where the speed is definitely magnified by the tall buildings all around. Every corner looks the same as the next one. Track knowledge is essential, but sometimes experience is not enough; the uninterrupted yellow-black-yellow-black sequence sometimes betrays even the most experienced riders.

Cars have raced between these Armco barriers since 1954, while bikes started racing at the Guia Circuit only a few years later, in 1967. Forget the Isle of Man TT, the Pikes Peak Hill Climb and the green Irish roadraces; the Macau Grand Prix is more similar to the much coveted Monte Carlo.

Racing there is not so easy either. Riders have to receive an invitation by the organizers and just 28 among the best roadracers in the world get the awaited call.

Macau marks the last round of the racing season and, thanks to this “Chinese Las Vegas” venue, entertainment is guaranteed. For the first few days, riders try to get over jet lag, spending time between nightclubs, swimming pools, and PR events. When the time to put their helmet on comes, however, everything suddenly changes; this is a job, a very dangerous one.

In Macau, though, bike racing is just a sort of second-class event compared to cars, with only two practice sessions—one at 7:30 in the morning, one in the afternoon—a warm-up, and a 12-lap race. Nothing more. Nonetheless a real burst of excitement: Superbikes fly very close to walls and barriers, sometimes touching them—and the colored stains on the leathers don’t lie!

The Guia Circuit leaves no room for errors. Just one mistake and everything could be over. Macau is a real gamble, in every way. The danger surely adds more excitement, but riders know the risks very well.

Every year they go and try to break the existing lap record, which still belongs to Scotsman Stuart Easton, who raced the Guia Circuit in 2:23.616 back in 2010. The most victorious rider in Macau is Michael Rutter, rightly called “the king of Guia.” He arrived in China this year with eight wins under his belt, none of them in recent years though. In fact, his teammate Peter Hickman landed in Macau as the number one favorite after his three victories in the last four years.

Even this time, Hickman dominated every practice session, leaving the crumbs to other competitors. The tall 32-year-old from the UK rode his Bathams BMW S 1000 RR like he was in a video game; nobody seemed able to even get close to him between the narrow corners of Guia.

On Saturday, November 16, the race started indeed with poleman Hickman getting the holeshot, followed by Rutter on the Honda RC213V-S MotoGP replica. However, after only four laps, marshals showed the dreaded red flag, stopping the race for a crash, luckily not a serious one. The race was restarted a few minutes later, but soon the red flags halted the race once more. This time the pileup involved six riders and the organizers took the hard decision to abandon the event due to lack of time and light.

Even with only one lap completed, the race was declared a result and the “king of Guia” Michael Rutter awarded the win, his ninth in Macau at 47 years of age.

Finally, the celebrations could start once more. All the excitement and the buzz of the racing season, all the anxiety about racing on one of the most challenging tracks in the world finally eased off with a big party night—another one—between the lights, the sounds, and the colors of Macau.