Astronomers Are Watching A Star Evolve In Real Time

After quickly heating up, SAO 244567 has started to chill out 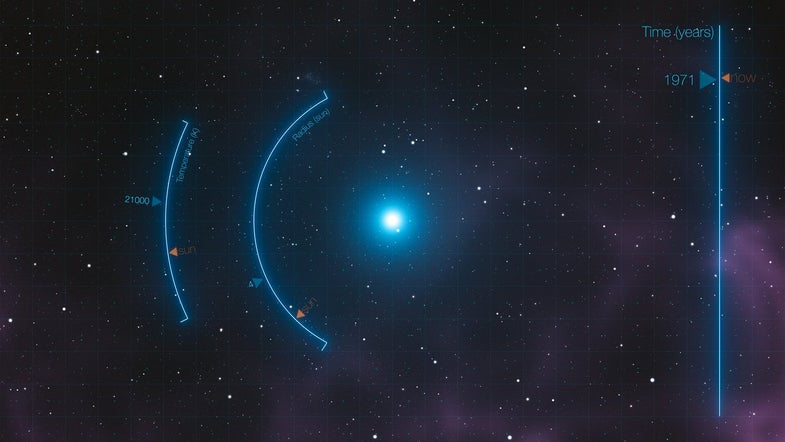 This artist’s impression shows a still from the video showing the evolution of SAO 244567’s rapid evolution.
SHARE

For the first time, astronomers have observed a star heating and then cooling as it is kicked back to an earlier phase of stellar evolution.

SAO 244567 is the central star of the Stingray Nebula, located 2,700 light-years from Earth. Using the Hubble Space Telescope, astronomers watched SAO 244567 become ever hotter between 1971 and 2002, doubling its temperature.

Now, astronomers have seen that the star has begun to cool and expand. They suspect that SAO 244567 has undergone a helium-shell flash event, in which helium ignites outside a star’s core. “The release of nuclear energy by the flash forces the already very compact star to expand back to giant dimensions — the born-again scenario,” Nicole Reindl of the University of Leicester, UK, said in a statement.

Over several hundred years, the star will continue to swell and return from blue-white to orange in color. SAO 244567’s rebirth offers a rare chance to witness stellar evolution in real time, coauthor Reindl and her colleagues wrote in Monthly Notices of the Royal Astronomical Society.