Astronomers using the Hubble Space Telescope have stumbled on a rare and surprising find: A very distant spiral galaxy, swirling... 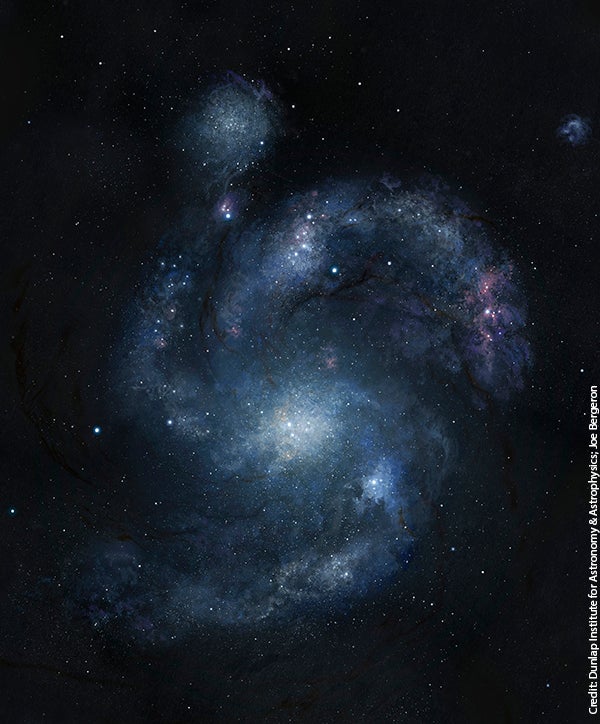 Astronomers using the Hubble Space Telescope have stumbled on a rare and surprising find: A very distant spiral galaxy, swirling billions of light years away, which formed at a time when such spiral galaxies were thought to be nonexistent. Researchers say it’s an astounding discovery — partly because it raises some questions about prevailing theories of galaxy formation.

Understanding galaxy evolution is a central part of determining the early history and future fate of the universe. Astronomers want to understand the physics that trigger vast amounts of stars to clump into galaxies, and that cause those galaxies to organize into clusters. The distant relics of early galaxies has helped solidify some of these theories, but this galaxy, known as BX442, is strange.

Most ancient galaxies — meaning very far away galaxies whose light left them billions of years ago, in the early days of the universe — are clumpy, irregular globs, not beautiful symmetric spirals or ellipses. This is because they moved around too quickly, which favors the formation of blob-like structures instead.

“The vast majority of old galaxies look like train wrecks,” Alice Shapley, a UCLA associate professor of physics and astronomy, and co-author of the new study, said in a statement. “Our first thought was, why is this one so different, and so beautiful?”

Shapley and colleagues spotted it while conducting a Hubble survey of about 300 very distant galaxies. Intrigued, they went to the W.M. Keck Observatory and checked it out with a special spectrograph. The instrument allowed them to look at thousands of locations in and around the galaxy, confirming that it is indeed a self-contained rotating spiral.

This was a key observation, because other putative early spirals could be a trick of the lens, and may be actually more than one galaxy merging together or something that just happened to line up from our point of view. “What we found when we took the spectral image of this galaxy is that the spiral arms do belong to this galaxy,” Shapley said. “It wasn’t an illusion. We were blown away.”

Why so surprised? After all, these “grand design” spiral galaxies are common in our cosmic neighborhood — the Milky Way is one, and so is Andromeda. The answer is that earlier galaxies almost universally have different structures, making this one an anomaly. Of the 306 galaxies in the Hubble survey, each of them around the same distance away, this is the only one with a spiral structure.

It is very large and thick, which may have something to do with the spiral formation. Or it could be the result of a collision with another system, which is at the upper left in the image at the top of the page. That might explain how this galaxy formed: You just need the right recipe, and it needs to be spotted at exactly the right moment.

“Not only must a galaxy be sufficiently massive to have stabilized the formation of an extended disk, but this disk must then be perturbed by a merging satellite sufficiently massive and properly oriented to excite an observable grand-design spiral pattern,” Shapley and her co-authors write.

A paper describing the new find appears this week in Nature.