Clear of Solar Pollution, Voyager Glimpses Star Formation in the Milky Way For the First Time

Another feat for the long-distance travelers 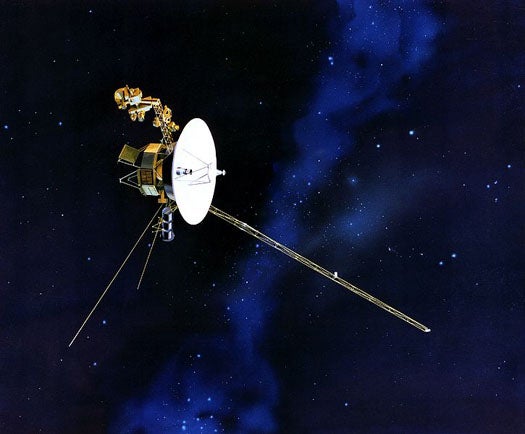 Like city lights blinding the night sky, the sun blocks out a lot of the signals from our galactic neighborhood. Our star and its magnetic fields shield the planets from cosmic rays and the interstellar wind — by and large a good thing, but it’s somewhat frustrating if you want to study the galaxy in greater detail. We cannot see, for instance, the hydrogen signals that serve as the birth pangs of stars in our neighborhood. Until now — the Voyager spacecraft have seen it for the first time.

The pangs in question are Lyman-alpha emissions, a phenomenon that occurs when single-electron hydrogen ions change their energy states. Lyman-alpha (Lyα) lines are most often seen in very distant galaxies, meaning very young galaxies, and often the type of galaxies thought to be precursors to Milky Way-like ones. (They’re also used for studying dark matter distribution, but that’s another topic.)

Alpha emissions are considered an indicator of star formation (and some other interesting phenomena) because they interact with and compress cold dust clouds and gas. So they would be a useful thing to study in our own galaxy, because they could provide information about the Milky Way’s star-formation rate, among other characteristics.

The first glimpse of local Lyα lines is now the Voyagers’ latest feat. The spacecraft are at the very edge of the solar system, and they have been noticing some bizarre things at the frontiers of interstellar space.

At roughly 40 AU — the mean distance of Pluto — the spacecraft’s spectrometers started to notice these galactic emissions. And they’re coming from the general direction of stellar nurseries, just as predicted. The Lyα hot spots span the constellations Scorpius and Ophiuchus, for those of you who are curious. Rosine Lallement and colleagues at the Paris Observatory and Université Versailles-St Quentin in Guyancourt, France, describe their findings in this week’s issue of the journal Science.

So what is the point of all this? Understanding the local Lyα field can serve as a kind of cosmic yardstick, for one thing. Scientists can start to compare the Milky Way’s star-formation rates and Lyα lines with other galaxies, and make comparisons to other star-forming regions in the universe.

“In the case of our Galaxy, a huge amount of information is available on stars, gas and dust. Milky Way Lyα data can be used to test the complex radiative transfer models that are developed for distant galaxies,” the authors say.

Now for the bad news: The Voyagers aren’t able to collect any more of this data, because they’re running out of power, notes physicist Jeffrey L. Linsky at the University of Colorado-Boulder. Voyager 2’s spectrometer has been shut off, and Voyager 1’s can’t scan the sky anymore, so it, too, will likely shut off soon. There’s a bit more data that remains to be analyzed, but any new observations will have to be made by a new explorer, Linsky notes in an accompanying article in Science.

That will be up to NASA’s New Horizons spacecraft, which is en route to Pluto for a 2015 arrival, and has a spectrometer that could make some of these hydrogen measurements.