It’s rude to ask a galaxy’s age. Luckily, its shape offers a clue. 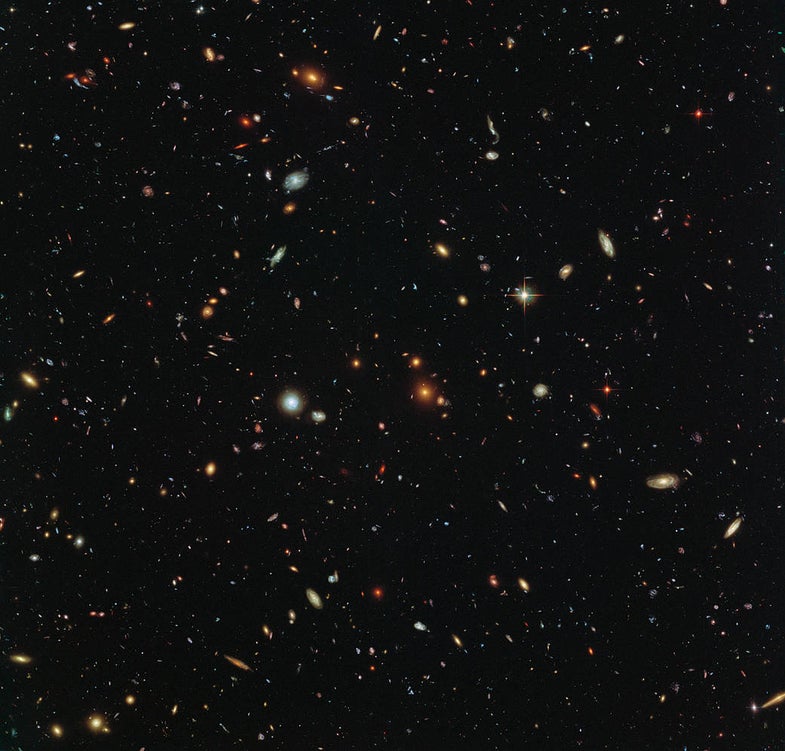 Galaxies, like those seen here come in a lot of different shapes. A new study suggests that by looking at a galaxy's shape we could learn something about its age. NASA, ESA and the HST Frontier Fields team (STScI), Acknowledgement: Judy Schmidt
SHARE

Galaxies come in a menagerie of shapes, from spiral pinwheels, to flat pancakes, to round balls. Now astrophysicists find these shapes may reveal clues about the age of galaxies, a discovery that could in turn yield insights on the dramatic ways galaxies can form and evolve over time.

Previous research suggested the 3-D shape of a galaxy may hold important hints about its history. For example, prior computer simulations revealed that when galaxies collide, mergers of galaxies rich in gases should result in new galaxies with rounder shapes.

To shed light on any link between a galaxy’s shape and its formation and evolution, researchers combed through data from the Anglo-Australian Telescope at Siding Spring Observatory in Australia. “Over the last couple of years, we have gathered 3D measurements of over a thousand galaxies of all kinds and with a hundred-fold range in mass,” said Jesse van de Sande, an astrophysicist at the University of Sydney. He and his colleagues just published their findings in a Nature Astronomy study.

Nearly all galaxies are basically “squashed spheres,” van de Sande said. Now the scientists find that “the younger the galaxy’s stars are, the more squashed the galaxy is,” he said. “Recent-born stars in galaxies start their lives in thin flat disks. The older stars are mostly in big puffy galaxies.”

One can roughly gauge a star’s age by its color — young blue stars grow old and turn red. “Color is how we measure a galaxy’s age,” van de Sande said.

Scientists have known for a long time “that shape and age are linked in very extreme galaxies—very flat ones and very round ones,” van de Sande said. “But this is the first time we’ve shown it’s true for all kinds of galaxies—all shapes, all ages, all masses.”

That includes oddities like pinwheel galaxies—such as our Milky Way—featuring both a puffy center and a flat disc. But even here, the researchers found that the rounder segment towards the center held older stars, while the spiral arms of the disk were younger.

Galaxy shape and age are not obviously linked, “so the connection is surprising and may point to a deep underlying relationship, van de Sande said. However, what that link remains uncertain. Are all galaxies born flat and become rounder over time? Or were galaxies in the early universe born rounder, while galaxies in the later universe were born flatter?

One possibility is that “a galaxy’s newly formed stars lie in a thin disk,” van de Sande said. “They move around the disk in an ordered way, like cars around a racetrack.”

However, as a galaxy ages, it may experience catastrophic events—such as collisions with other galaxies. “These events disorder the star movements,” van de Sande said. “The galaxy becomes less like a racetrack full of cars and more like swarm of bees. Basically, it becomes a big, puffy bundle of stars zooming in many directions.”

Scientists could analyze galaxies from the early universe to see how well this relationship between age and shape holds, said astrophysicist Anne-Marie Weijmans at the University of St Andrews in Scotland, who did not take part in this research, and wrote an accompanying piece in Nature Astronomy. However, the light from this era of the cosmos is difficult to see—to deduce the 3-D shapes of such ancient galaxies, scientists have to rely on the powerful gravitational fields of intervening galaxies that warp the fabric of space and time and act like powerful lenses, “which are rare,” she said.

Future research can also now examine groups of galaxies “that share similar properties,” Weijmans said. “What in that case is the relation between shape and age, and does that fit into the ideas that we have of galaxy evolution for those specific types of galaxies? Are there any exceptions or outliers, and if so, can we understand why?” The shape of things to come may hold more discoveries about galaxies.