How many stars are there in the whole galaxy?

Our solar system is just a tiny speck in the Milky Way. 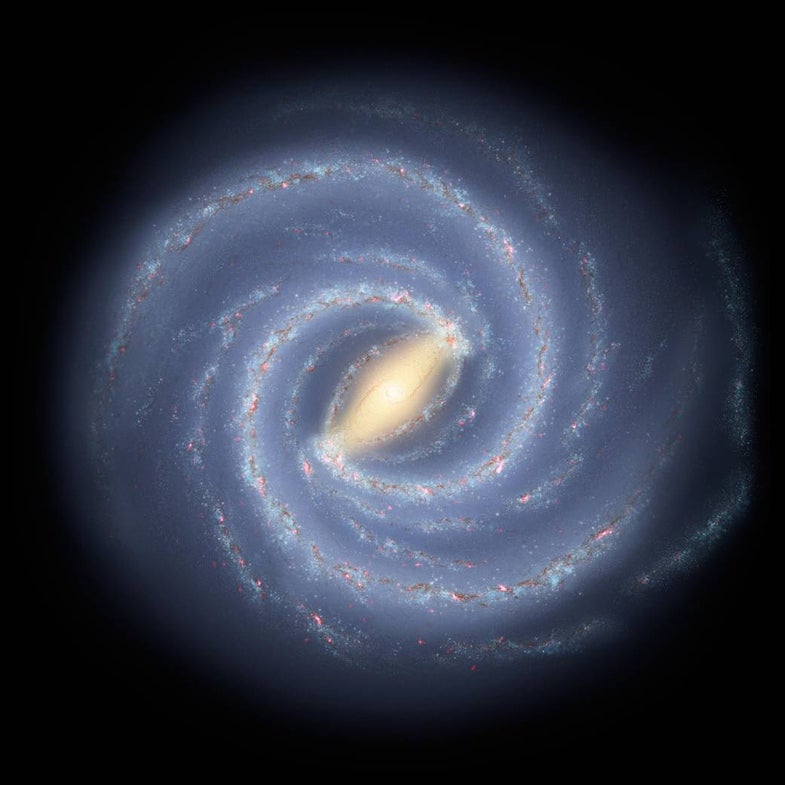 When you gaze up into the night sky, there are thousands of stars you can see without any help from a telescope. That might sound like a lot. But those stars are actually just the ones that are brightest and closest to Earth. The Milky Way—the galaxy Earth calls home—is bigger. A whole lot bigger. But just how many stars are there in the galaxy?

Unfortunately, we can’t simply look at all the stars with telescopes and count them up. That’s because our galaxy isn’t only full of stars. There are also clouds of dust and gas that block our view of dim or faraway stars. So astronomers have to answer this question by working backwards.

The first step is to figure out how much stuff, or mass, there is in the entire galaxy. Astronomers at the University of Arizona recently estimated that the Milky Way weighs about 960 billion times as much as our own sun. It’s made up of things like stars, dust, gas… and dark matter. Dark matter is mysterious and scientists aren’t really sure what it is. However, they can see how gravity from dark matter affects stars as they orbit the center of the galaxy. “Basically the faster your stars are moving, the more dark matter there is,” explains Malanka Riabokin, an instructional specialist in the astronomy department at the University of Arizona in Tucson. Dark matter is believed to make up around 90 percent of the material in the galaxy. Once you subtract the dark matter and dust and gas, you’re left with all the star stuff—the equivalent of about 30 to 50 billion suns.

But the actual number of stars is much higher than that. That’s because stars can be anywhere from 8 percent the mass of our own sun to 20 times as large. When astronomers look at the places where stars are born, they see tiny stars are much more common than massive ones.

So we know how much star stuff is floating around the galaxy. And we know roughly how much of that mass should be big stars, and how much should belong to small stars. That means we should know how many stars there are in total, right?

Well, kind of. There’s a lot of guesswork that goes into each step of counting the stars in the galaxy. This means that there isn’t just one estimate for how many stars are scattered across the Milky Way. Depending on whom you ask, there may be anywhere between 200 billion and 1 trillion stars out there.

Any way you slice it, though, that’s a lot of stars.

“When you look up at the night sky and realize that there are literally billions upon billions of stars that you cannot see, and just how deep that space must be to accommodate all those stars (and other galaxies, so much farther away!) it starts to give you an appreciation of the scale of the Universe,” Riabokin says.