What spun this exquisite deep-space ‘spider web’? (Hint: not aliens.) 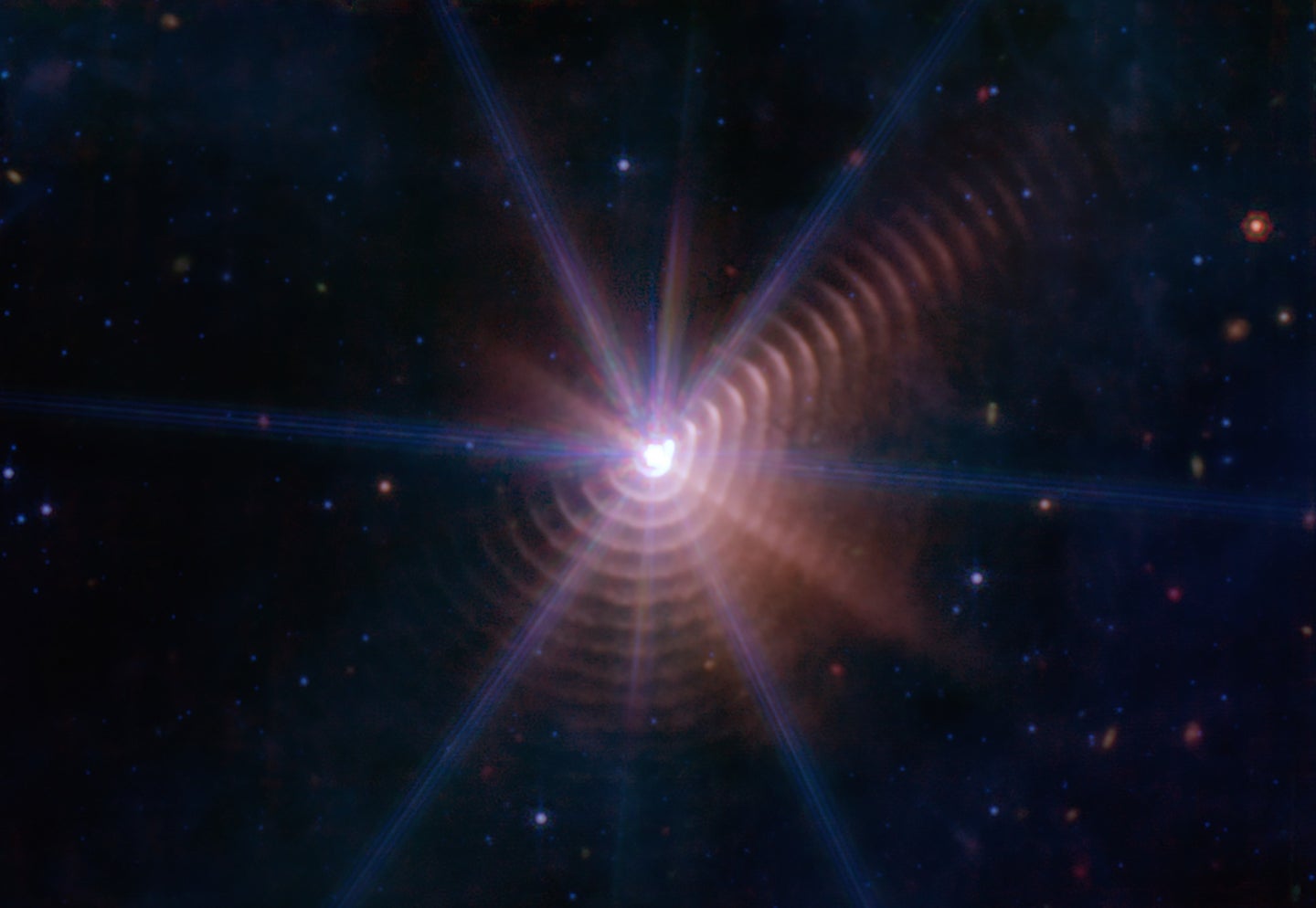 When the James Webb Space Telescope (JWST) sent back images in July, a photo of a distant star known as WR140 sparked some interesting conversation. Some on the internet speculated that the concentric, somewhat rectangular ripples spilling out from the star could be evidence of an alien megastructure.

Two new papers published in the journals Nature and Nature Astronomy are throwing some some cold water on that theory. In the new papers, Australian astronomers explain that the 17 concentric rings that look a bit like a spider web are a series of dust shells. These shells are created by the circular interaction between a pair of hot stars locked together in a tight orbit.

“Like clockwork, WR140 puffs out a sculpted smoke ring every eight years, which is then inflated in the stellar wind like a balloon,” Peter Tuthill from the Sydney Institute for Astronomy at the University of Sydney, a co-author in both papers, said in a press release. “Eight years later, as the binary returns in its orbit, another ring appears, the same as the one before, streaming out into space inside the bubble of the previous one, like a set of giant nested Russian dolls.”

The WR140 binary is made up of one huge Wolf-Rayet star and an even bigger blue supergiant star. The two are gravitationally bound in an eight-year orbit around each other. All stars generate stellar winds, but the gusts from a Wolf-Rayt star are more like a hurricane. Some of the elements in the wind condense out as soot, which remains hot enough to glow bright when captured using infrared cameras like those on the JWST. The telescopes can follow their flow.

Because the two stars are in elliptical orbit (more oval shaped) rather than a circular orbit, dust production turns on and off as WR140’s binary companion gets closer to it. Using data collected from other telescopes since 2006, Tuthill and his former student Yinuo Han created a 3D model of the dust plume’s geometry. That model is featured in the Nature paper and explains the bizarre image obtained by the JWST back in July.

[Related: After the big bang, light and electricity shaped the early universe.]

Han and Tuthill’s work also shows the first direct evidence of intense starlight driving into matter and accelerating it, after tracking the huge plumes of dust generated by the violent interactions between these two colossal stars over the course of 16 years.

“It’s hard to see starlight causing acceleration because the force fades with distance, and other forces quickly take over,” Han said in a press release. “To witness acceleration at the level that it becomes  measurable, the material needs to be reasonably close to the star or the source of the radiation  pressure needs to be extra strong. WR140 is a binary star whose ferocious radiation field  supercharges these effects, placing them within reach of our high-precision data.”

With JWST now in operation, researchers will be able to learn much more about WR140 and similar systems. “The Webb telescope offers new extremes of stability and sensitivity,” Ryan Lau, assistant astronomer at the U.S. National Optical-Infrared Astronomy Research Laboratory and lead author of the Nature Astronomy study, said in a press release. “We’ll now be able to make observations like this much more easily than from the ground, opening a new window into the world of Wolf-Rayet physics.”