How the writers of Cosmos bring science to life

An interview with Ann Druyan and Brannon Braga. 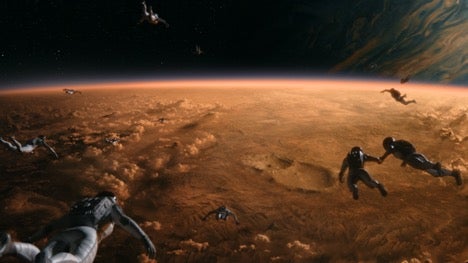 Cosmos: Possible Worlds finds hope for humanity’s future in stories from its past. Cosmos Studios
SHARE

Since 1980s, the television show Cosmos has woven together threads from physics, astronomy, neuroscience, ecology, and other fields while teaching and entertaining along the way. It’s a daunting challenge, but one that the show’s writer and executive producer, Ann Druyan, relishes.

She’s been deeply involved in the program since its original incarnation, Cosmos: A Personal Voyager, which she co-wrote with her husband, the late physicist Carl Sagan. In the show’s third installment, which will air on March 9 on National Geographic, Druyan expands on the lessons and themes of its forerunners. She hopes that the new season—entitled Cosmos: Possible Worlds—will inspire viewers to work toward an improved future by highlighting scientific progress from the past.

Druyan and her co-writer and director Brannon Braga recently sat down with Popular Science to explain how they turn scientific discoveries into binge-worthy entertainment. The following interview has been edited for length and contains mild spoilers.

With science being so vast and deep, how do you pick the topics for each episode?

Druyan: I’ve always believed that we’re a story driven species. Over the intervening years between seasons we go out hunting for science stories that work on many different levels, which is important to make them accessible to everyone. I’m not a scientist and I know if I don’t understand something most other people won’t either and that’s no fun.

During our research, for example, I found a story of a man named Oleksandr Shargei. His life was one of relentless persecution and disappointment, and yet he had an epiphany in a WW1 trench about a practical way of landing on the moon—not a direct surface-to-surface flight, but the idea of a lunar orbiter. And the amazing thing is, in the midst of his suffering, he had the foresight to address future lunar astronauts in his writing. “Be not afraid,” he urged them, “there is no technical obstacle to accomplishing this.”

To me that’s a multiple-level story. It has a brilliant guy you’ve never heard of, an inspired idea, perseverance in the face of terrible obstacles, and a deep contribution to humanity’s scientific endeavors. Sometimes your dreams die with you, and sometimes other people pick them up and take them the moon. That’s Cosmos.

Cosmos is known for waxing poetic about life and the universe. What’s the writing process like?

Druyan: Cosmos is completely scripted. In fact the only ad lib in the entire history of the series was with Carl and the apple pie sequence in season one. [“If you wish to make an apple pie from scratch,” he quipped, “you must first invent the universe.”]

After we gather all our stories, Brannon and I sit in a room together for a year or two writing, refining, and bouncing stuff off each other. It’s so much fun. When we’re really happy with our scripts, we involve this immense family of literally 987 people. We counted. This is a huge undertaking. Then we might go through forty or fifty iterations of an effects shot before we’re all completely satisfied. Finally, [astrophysicist and narrator] Neil deGrasse Tyson comes in and says the words that we wrote.

How has the show’s recent reincarnations evolved from the original Cosmos?

Braga: The effects. Even since 2014 [when the second season aired], the quality and the amount of visual effects we can do has improved. Just watching the trailer with Ann, I was thinking, “Wow, this looks better than Star Wars. And it’s real!”

Druyan: Our Visual Effects Supervisor, Jeff Okun, really did the impossible. Brannon and I had these dreams of what we would see but he and his team really exceeded our wildest expectations.

You mix live footage with computer simulations, animation, and even stop-motion photography. What’s the significance of using these different mediums?

Druyan: I have wanted to tell the story of Nikolai Vavilov [a Russian botanist] for over 20 years. I fell in love with this guy and his amazing story, as well as that of his colleagues and their astonishing willingness to pay the greatest possible price for our future. Brannon and I were both so taken by this notion. If only we cared about our future as much as they did.

I love all the 2D animation sequences, but I have to say that there was a particular humanity and drama in Vavilov’s life, and somehow the stop motion gives it almost an otherworldly feeling. There’s just so many ways to show things. We want to walk on so many different legs, because we’re depicting not just the physical universe but also these islands of perception of the other forms of consciousness on this planet. One 2D animation sequence represents a bee’s point of view, for instance. I think that’s another very effective tool.

Braga: And a lot of the time in the show’s conceptual stages, we have to decide how we’re going to show something. We cover everything from bee funerals to quantum mechanics, so we’re lucky to have so many visual mediums at out fingertips and so many talented people.

Speaking of visual effects, you highlight black hole mergers and planet formation, which are both active areas of research right now. How do you make sure you stay accurate and on top of the latest science?

Druyan: We’re very lucky to have Andre Bormanis [the science consultant for various seasons of Star Trek] as our science monitor. We also had a dozen scientists advising us and checking the scripts. We all make mistakes, but the idea is to have a lot of redundancy. We were always going for verisimilitude. Nature is more beautiful than anything we can invent.

Brannon mentioned that beehive scene, for instance. When a bee is dying, it will secrete a micron of a particular substance as a signal, and immediately the other bees know to act as pallbearers and carry it out of the hive before it becomes a threat. In order to get a shot of this process, Bannon had to find the absolutely best bee cinematographer on the face of the Earth, and he was able to recreate the scene with this perfectly healthy bee kicking and screaming while the other bees carry it out. We try to get the science right and we go to great lengths to do that.

You film on location all across the globe. How do you view the role of place and geography in your storytelling?

Druyan: In order to inspire people to wake up from their stupor and act in defense of the planet and its many inhabitants, I think it’s important to convey the diversity of locations and conditions on this planet. We’ve looked at a few other planets, and they’re not as interesting and this one! It’s so rich in diversity because that’s what life does. It reworks the sky. It reworks the surface. And we wanted to pay tribute to that as often as we can.

In the present environmental circumstances that we find ourselves in, there’s this darkness casting a long shadow over our future. But we believe humanity has what it takes to bring about a great future, and that’s what wanted to depict in Cosmos. Because we believe in that future, not in a pie in the sky way but in a real way, based on our long history of scientific progress and discovery. We have what it takes to get there.

Cosmos: Possible Worlds premiers March 9 on National Geographic, and you can check out a trailer for the show here.