Can you overdose on weed?

You probably can’t blaze yourself to death, but that doesn’t mean there’s no such thing as a marijuana overdose. 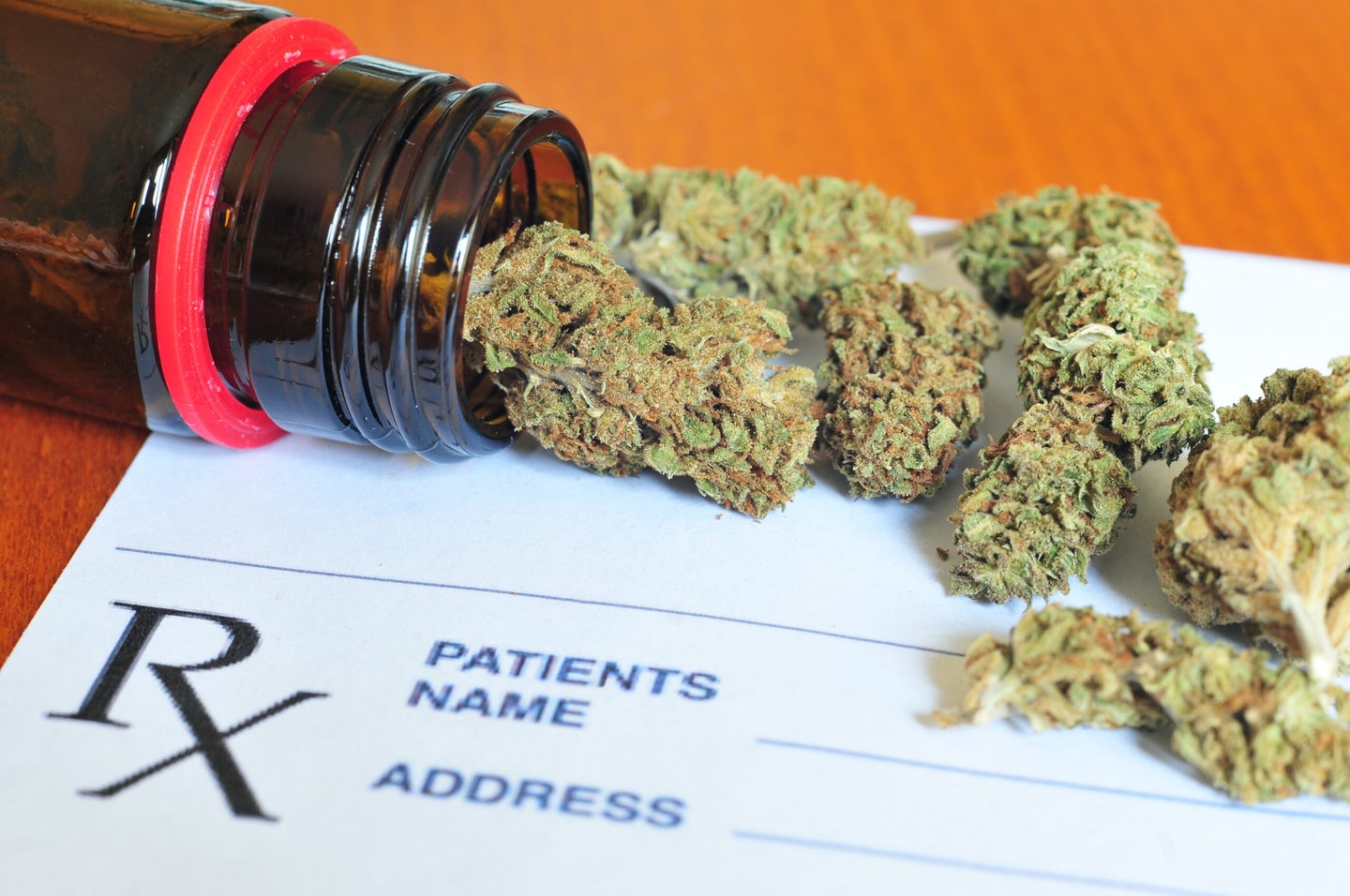 There is no evidence medical marijuana would help prevent COVID. Deposit Photos
SHARE

Back in May of 2019, a coroner in Louisiana claimed to have recorded the first death exclusively caused by weed.

Toxicology results for a woman who died suggested she was killed by an excess amount of THC, the primary psychoactive component of weed, the coroner, Christy Montegut, told the New Orleans Advocate. Montegut failed to find anything else—drugs, alcohol, disease—that could have attributed to her death.

Stories about a supposed first-ever lethal marijuana overdose occasionally crop up. They’re usually followed by rebuttals that no, as far as we know it’s not possible to die from ingesting too much THC at one time—and dying from another cause while having THC in your system is not quite the same thing.

According to the National Institute on Drug Abuse (NIDA), a government agency that handles drug use and addiction, there has yet to be an adult death attributable solely to marijuana. The Centers for Disease Control and Prevention also states that while using too much marijuana can cause extreme confusion, emotional distress, increased blood pressure, heart rate, severe nausea, or unintentional injury, “a fatal overdose is unlikely.”

A prominent argument for the impossibility of death by weed is a statistical one: Marijuana is the most commonly used illicit drug in the United States. Half of U.S. adults have tried it in their lifetime and one in five young adults under age 25 report having used marijuana in the past month, according to 2017 NIDA statistics. In 2015, 36 million Americans over the age of 12 reported using marijuana in the past year—which, according to rudimentary statistics, would have resulted in dozens of fatalities if the odds of blazing yourself to death was even one-in-a-million.

“Whether you can die from an overdose of marijuana, the answer is no,” says Alex Manini, an emergency medicine clinician specialist at Mount Sinai Hospital in New York. But can someone non-fatally overdose on marijuana? Manini says yes. Technically, an overdose happens any time someone takes more than the normal or recommended amount of a substance or drug.

And people show up in emergency rooms all the time after overdoing it with cannabis, Manini says, with all kinds of serious symptoms: panic or anxiety attacks, passing out, rapid heart rate—even an increasingly common condition where cannabis users can’t stop vomiting.

“You (can) think of taking a hit as a therapeutic dose, to get a feeling of euphoria, maybe the giggles,” he says. Or you can smoke so much that you feel like you need to go to the hospital. “I would call that an overdose. Will you die, if you’re a young, healthy person? Probably not.”

Marijuana is still a Schedule I drug, according to the federal government, and technically still doesn’t have any currently accepted medical uses. Still, numerous states have moved to legalize marijuana for recreational or medical treatment (mostly for conditions such as cancer, HIV/AIDS, multiple sclerosis, glaucoma, seizures, epilepsy, and chronic pain). We also know—from a 2016 analysis of marijuana samples from materials confiscated by the Drug Enforcement Administration over two decades—that the potency of THC in marijuana has increased at least threefold since 1995.

Altogether, this means that more people have more access to strong cannabis. For most, that just increases your probability of getting higher than planned. But for some people, doctors say the advent of widespread, highly-potent cannabis products increases their risk of an overdose.

One group of at-risk individuals is children, who can accidentally ingest cookies, brownies, and other treats infused with super-concentrated THC doses—especially in states where recreational marijuana has been legalized. In a 2016 study, researchers investigated 430 calls to the National Poison Data System from 2013 to 2015 related to cannabis edibles and drinks; they not only found that the number of such calls increased year over year, but they also noted that a quarter of the cases involved children under the age of five, who, unlike adults, don’t know an ordinary looking treat might contain several doses of THC.

“That was a big finding,” says Dazhe Cao, a co-author of the study and a medical toxicology doctor at the University of Texas Southwestern Medical Center in Dallas. For those young children, cannabis exposure typically made them sleepy or uncoordinated, or affected their breathing (in two cases leading to intubation).

“That could [be a] potentially life-threatening situation for a child,” says Mount Sinai’s Manini. “Children are not little adults”—their bodies process all drugs differently than even a more petite adult would.

Synthetic cannabinoids—man-made chemicals sometimes called Spice or K2—have also complicated the safety of all cannabinoids. When Manini and colleagues compared the clinical effects of synthetic weed with regular marijuana in 87 emergency department patients, they found those who ingested synthetic cannabis fared far worse, according to results published in 2016.

“They had much worse cardiovascular effects, much worse agitation,” he says. The two products are chemically different, he explains, and so their safety should be considered separately. “The safety of marijuana has been borne out over decades. This is a whole new world.”

And even if marijuana itself won’t directly kill you, there have been deaths associated with cannabis products, Cao says. In a 2014 case, a 19-year-old Colorado man died after he ate a cannabis cookie, began behaving erratically, and jumped off a fourth-floor balcony. His autopsy reported marijuana intoxication as a chief contributing factor.

“It is very controversial to say whether someone can die from marijuana or cannabis products” Cao says. “They’re not always direct causes of deaths.”

Cannabis use can also increase heart rate and blood pressure, and it can be a risk factor for some people who have pre-existing heart-related conditions, whether they know it or not.

In one 2014 study, a group of French researchers examined 35 medical cases and concluded that cannabis could be a potential trigger for cardiovascular complications in young people. And when researchers from the Einstein Medical Center in Philadelphia analyzed a national database of patients, they found the prevalence of heart failure, stroke, coronary artery disease, and sudden cardiac death, were significantly higher in patients with cannabis use, according to results published in 2018. After adjusting for a number of factors including age, sex, diabetes, and tobacco or alcohol use, they found cannabis use remained an independent predictor of both heart failure and stroke.

Scientific evidence also links long-term marijuana smoking with chronic bronchitis and respiratory symptoms like coughing and wheezing (there is not an established association between smoking weed and the incidence of lung or head and neck cancer). The long-term health effects of vaping remain mostly unknown.

If you have pets at home, you might also be wondering how marijuana might affect them. For obvious reasons, the rise in edibles can pose a danger for your furry friends. Cats and dogs are increasingly exposed to THC-containing products, especially chocolate-containing treats, according to a 2018 examination of calls made to the Pet Poison Helpline. Because dog brains have more cannabinoid receptors than human ones, the study notes, they could be more sensitive to marijuana’s psychoactive properties (common signs of poisoning for dogs include lethargy, impaired balance, vomiting, and increased sensitivity to motion and sound). As seems to be the case with humans, the paper also notes synthetic cannabinoids may result in more severe symptoms for pets, such as tremors, aggression, and seizures. But to be clear, the authors note that “fatality in pets from marijuana intoxication is extremely rare” and that no deaths associated with marijuana had ever been reported to Pet Poison Helpline.

All of this is not to say people should be afraid of marijuana, Manini says, or that they should lump it in with other commonly-used substances that regularly kill people (on average, 130 Americans die every day from opioid overdose and six people die daily from alcohol poisoning in the U.S.). Across the nation, most people over the age of 12 don’t see a great risk of harm from monthly marijuana use, according to statistics from the Substance Abuse and Mental Health Services Administration.

“It probably has a better safety profile than a lot of other illegal substances,” Cao says. “The perception that this is dangerous is dropping. But you can absolutely overdose.” Actually dying from that overdose however, is far less likely—if at all possible.