The new observations include a blooming nebula, a watery exoplanet, and a secret star sanctuary. 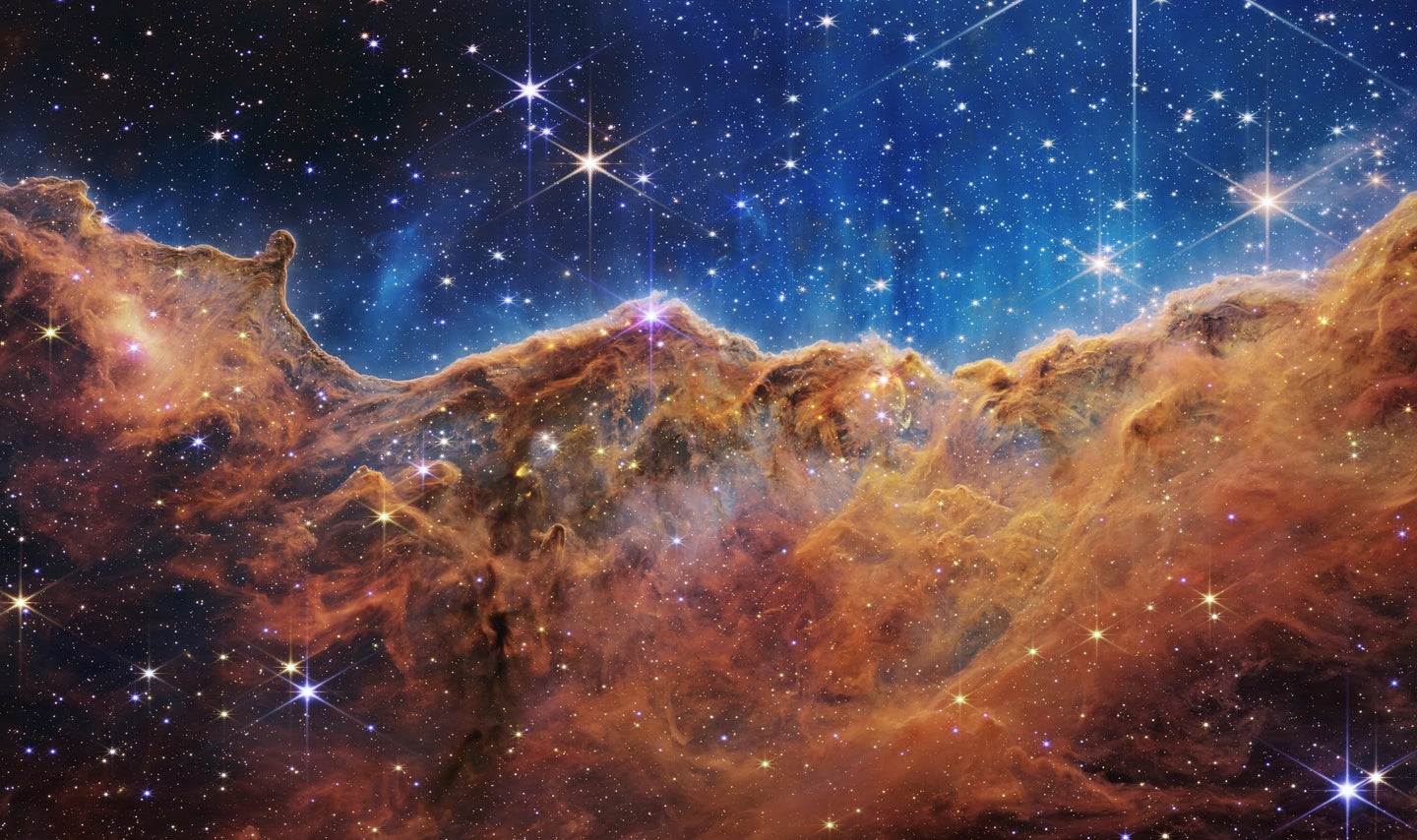 This is the edge of a nearby star-forming region called NGC 3324, in the Carina Nebula. NASA, ESA, CSA, and STScI
SHARE

Tuesday morning, during the opening remarks for the JWST image releases, Webb Program Director Greg Robinson asked the audience on NASA’s Goddard Campus if anyone had seen the scene released last night.

“Well,” he said, after people cheered enthusiastically. “You ain’t seen nothing yet.”

The JWST team has released five images from its first six months of flight and observation. The telescope is the largest and most powerful observatory released into space, and part of its strength is its ability to capture visuals through infrared light—it adds depth that the human eye can’t detect.

The telescope is able to look through dust and clouds to see the birth of stars and galaxies more than 13.1 billion years ago, further back in time than humanity had been able to previously observe. The universe is estimated to be 13.8 billion years old, which means, as NASA Administrator Bill Nelson said Tuesday, that humans are closer than ever before to understanding what happened after the Big Bang, when the universe started.

“We will be determining questions we don’t even know to ask,” Nelson said.

[Related: What comes after the James Webb Space Telescope? Some astronomers want LIFE.]

The JWST images depict clusters of galaxies formed about when the sun and Earth formed, water vapor in the atmosphere of an exoplanet 1,000 light years away, the planetary nebula around a dying star, the cosmic evolution of galaxies, and the birth of stars.

And all of this is just the beginning, said Jane Rigby, the Operations Project Scientist for the JWST. With fuel for another 20 years, the telescope is anticipated to collect data that scientists haven’t yet developed the questions for.

Prior to this, it took Hubble two weeks to take the farthest-ever image of a galaxy. The JWST will be able to capture images even more distant in a shorter amount of time—all of these images were captured within a week. “With Webb,” Rigby said, “we did this before breakfast.”

The top image sparkles with stars—including freshly made ones—in a sea of gas and dust. JWST captured part of the Carina Nebula, an area called NGC 3324, revealing new regions where infant stars are born. Visible light can’t detect the stellar nurseries, thanks to the cosmic dust in the way. But because JWST’s Near-Infrared Camera and Mid-Infrared Instrument use infrared light, the telescope can pierce through the dust, unveiling stars by the hundreds and even galaxies in the background.

Ultraviolet radiation from the young stars has carved into the wall of the nebula, creating the appearance of crags and canyons in the image, which NASA named the Cosmic Cliffs. The scene, 7,600 light-years away, is immense: Some of the pillars of dust and ionized gas are 7 light-years high.

Two JWST cameras observed the Southern Ring Nebula, also known as NGC 3132. Two stars, orbiting each other, are encased in layers of gas and dust 2,500 light-years away from Earth. One of the stars is nearing the end of its life; as it dims, the sun expels cosmic debris in bowl-shaped shells.

Data from these images will help astronomers understand these type of events, known as planetary nebulae, in greater detail. The gassy puffs are final gasps in slow-motion. It takes tens of thousands of years for planetary nebulae to extinguish. In the meantime, researchers can study images like this one to understand what molecules make up the stars’ shrouds.

Though it isn’t as flashy as some of JWST’s other images, this data reveals that water vapor is present in the atmosphere of an exoplanet—a planet outside our solar system—more than 1,000 light years away. This information will be crucial in searching for potentially habitable planets beyond Earth. WASP-96 b is just one of more than 5,000 confirmed exoplanets in the Milky Way, and is an extremely hot, gas giant planet unlike Venus or Jupiter. It is also hotter and “puffier” than any planet that orbits our sun, with a temperature pushing 1,000°F and half of Jupiter’s mass but 1.2 times more its diameter.

On June 21, the Near-Infrared Imager and Slitless Spectrograph on JWST measured light from the WASP-96 b system for more than six hours, producing a light curve that provides more data about the makeup of the exoplanet’s atmosphere. On the chart, the peaks and valleys indicate the presence of water vapor detected in the wavelengths of light, showing evidence of haze and clouds that previous studies of WASP-96 b were unable to detect.

This mosaic, constructed from nearly 1,000 image files and more than 150 million pixels, is JWST’s biggest image yet. Five galaxies are seen here. One, named NGC 7318B, is tearing a destructive path through the cluster. JWST has captured the shock waves from its intrusion, as well as gas and dust pulled into swirls and swoops as the galaxies’ gravities interact.

Because four of the five are so close, on the cosmic scale, they provide what NASA calls a “laboratory” to study fundamental processes of galactic evolution. Here, the galaxies have disturbed each others’ gases, and have even triggered the formation of new stars in their neighbors.