The odds are slim, but a new analysis shows it’s possible. 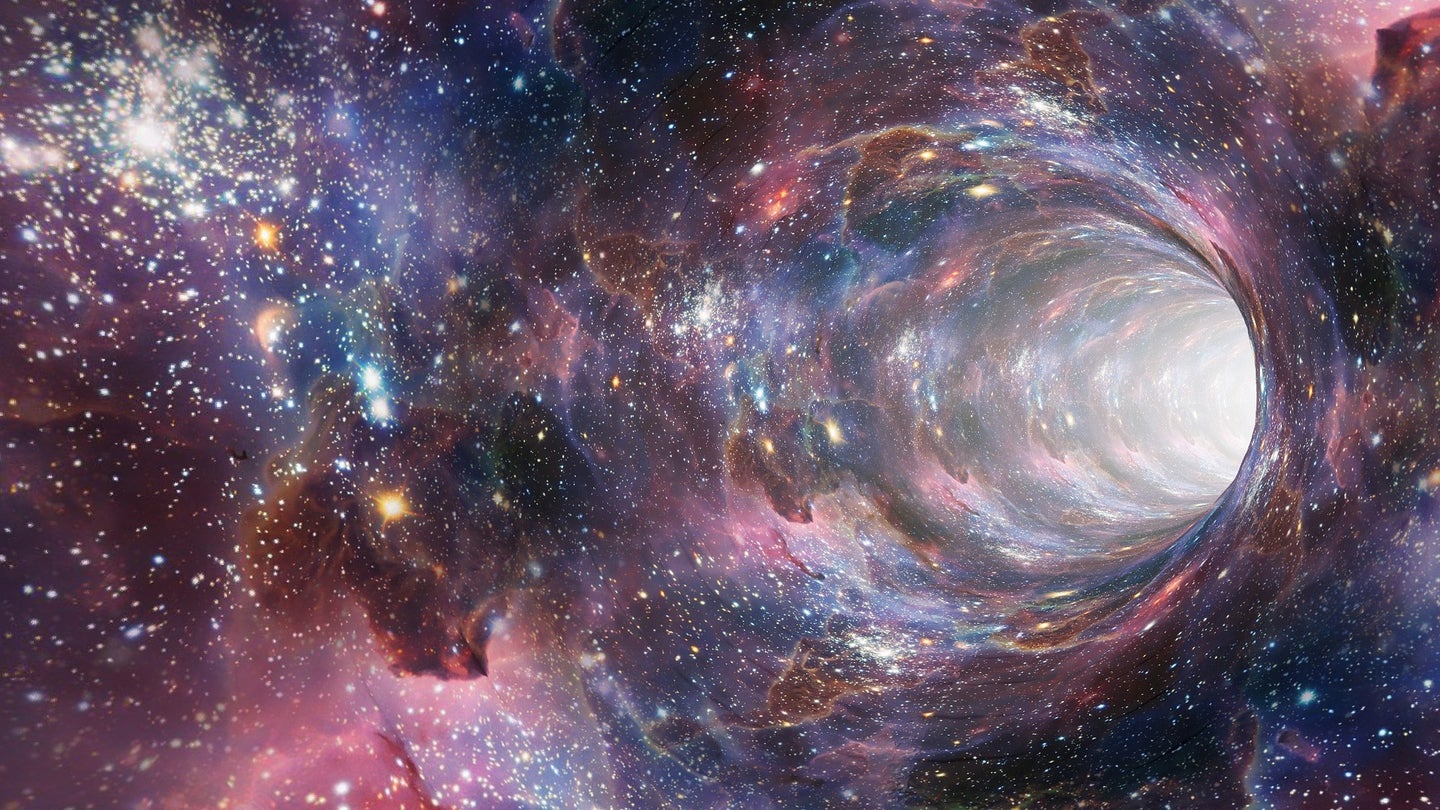 Science fiction writers love wormholes because they make the impossible possible, linking otherwise unreachable places together. Enter one, and it’ll spit you back out in another locale—typically one that’s convenient for the plot. And no matter how unlikely these exotic black hole relatives are to exist in reality, they tend to fascinate physicists for exactly the same reason. Recently, some of those physicists took the time to ponder what such a cosmic shortcut might look like in real life, and even make a case that there could be one at the center of our galaxy.

The most surefire way to confirm a wormhole’s existence would be to directly prod a black hole and see if it’s hiding a bridge to elsewhere, but humanity may never have that opportunity. Even so, researchers could rule out some of the most obvious scenarios from Earth. If the monster black hole residing in the churning center of the Milky Way, for instance, is more door than dead end, astronomers could tease out the presence of something on the other side. Black hole researchers have tracked the orbits of stars, such as one called S2, circling this galactic drain for years. Should those stars be feeling the tug from distant doppelgängers beyond the black hole, they’d perform a very particular dance for anybody watching, according to a recent calculation.

“If astronomers just measure the orbit of S2 with higher precision so that we can narrow it down [and notice such a dance],” says Dejan Stojkovic, a theoretical physicist at the University at Buffalo who helped calculate the result, “that’s it. That’s huge.”

Wormholes represent one strange shape of space theoretically allowed under the auspices of Einstein’s theory of gravity, but only black holes have the oomph required to actually sculpt one. One way to check if a given black hole has managed to put a pleat in the fabric of space would be to pull an Interstellar and try to send a probe through, but we’d have to wait thousands of years for any spacecraft to reach the nearest candidates.

To make such a mission even more quixotic, most physicists agree that human-traversable, sci-fi-style bridges can’t exist. The only way to fight their natural tendency to collapse, according to Einstein’s equations, is to put in a type of repulsion that other laws of physics forbid on large scales—negative energy (physics students may remember that energy, unlike velocity or acceleration, always comes out positive). Stojkovic says he and his collaborators avoided such “hocus pocus” in their previous work, describing a wormhole that would work in our universe.

However, just because astronauts can’t travel through a large wormhole doesn’t mean that nothing can. Working within the framework of Einstein’s theory of gravity, in the previous work the group found a way to build a big, stable wormhole kept open by the force driving the expansion of the universe. The new work extends the old, calculating that while most particles and electric fields stopped short, the force of gravity can sail smoothly through. That means, theoretically, objects on our side could feel the tug of something especially massive on the other side. “We were kind of surprised,” Stojkovic says, “but what else would you expect? Gravity is the property of spacetime itself.”

The new research, recently published in the journal Physical Review D, goes on to ask whether astronomers could detect such subtle gravitational tugs on stars in the Milky Way.

The ideal target, Stojkovic and his colleagues propose, is Sagittarius (Sag) A—the black hole that allegedly sits at the heart of our galaxy. More specifically, they calculated the possible effects on S2, a star that orbits Sag A. If the black hole harbors a wormhole within it, similar stars would likely orbit on the other side, somewhere else in the universe, and S2 might feel the gravitational pull of a distant twin traveling through the cosmic connection between them.

Any resultant swerves S2 might make would be slight, but after more than 20 years of observation astronomers have clocked the star’s acceleration to four-decimal-place precision. With roughly 100 times more accuracy than that, Stojkovic estimates, astronomers would have the sensitivity to test his wormhole hypothesis—a benchmark he says current experiments should naturally reach in a couple more decades of data collection. If S2’s motion brings no surprises at that point, he says, then Sag A* must either be an everyday black hole, or a wormhole linking to a rather empty area of space.

But while Stojkovic and his colleagues analyzed their large wormhole using Einstein’s equations, other theorists studying the (as yet theoretical) microscopic properties of space and gravity aren’t so sure these conclusions hold at the particle level. Daniel Jafferis, a physicist at Harvard University, says that since no one has proposed a way for large wormholes to form, any odd jigs by S2 would raise more questions than they would answer. “Someone would probably have had to have made the wormhole intentionally,” he says. And the only thing less likely than a real wormhole might be a real wormhole constructed by super advanced aliens.

Furthermore, he suggests that the realities of particle physics may clash with conclusions drawn purely from Einstein’s equations, and that without the “magic” of negative energy, non-traversable really means non-traversable, full stop. “Nothing can get through, including gravitons [the hypothetical gravity particle],” Jafferis says. “So it seems [the wormhole] cannot be seen or detected from the outside.”

Stojkovic, who says he was motivated to do the calculation purely from personal curiosity, fully acknowledges the astronomically long odds. Nevertheless, since astronomers are collecting the data anyway, he loses nothing by waiting with an open mind. “If one worm hole is found, then there is no reason to believe that there aren’t many others,” he says. “When we found the first candidate for a black hole, then suddenly we saw millions of them.”

Correction: This article has been updated to accurately delineate the calculations of the group’s two publications.