Going to Alpha Centauri "within a generation" 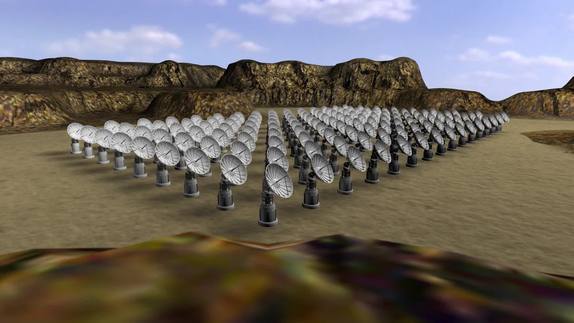 A mockup of the huge laser array that would send nanocraft to Alpha Centauri. Breakthrough Initiatives
SHARE

Milner plans to spend $100 million in the first phase of his Breakthrough Starshot project, to blast probes no bigger than cracker on a 20-year mission to our nearest neighboring star system, Alpha Centauri, 25 trillion miles away. The probes are each about “the cost of an iPhone,” Milner told Popular Science in an exclusive interview a few days before the announcement. “So essentially we can mass-produce them.”

That’s crucial to his plan, because he expects space dust to take out many of the interstellar travelers on their journey. So he’ll need lots of them. Milner plans to send these Earth ambassadors into deep space via a laser beam that will push their light sails and send them flying. He also says tiny thrusters on the bots will help along the way. And small antennas will, once they reach their destination, send back information on what they encounter. Some form of intelligent life, he hopes. “Hopefully we will see something, but not too scary,” he said.

Milner announced his plan to a media-packed room on the 102nd-floor observation deck of New York City’s One World Trade Center.

Since humans sent the first satellites into Earth’s orbit, starting with Russia’s Sputnik success in 1957, scientists and engineers have gotten pretty good at sending large metal objects further and further into space. The drawback has always been propulsion: how to push these around the galaxy. Traditional, fuel-based thrusters can only push these big tin cans to the outer limits of our solar system in any kind of human lifetime. Even the Planetary Society’s LightSail, which uses light from the Sun for propulsion, is only useful for nearby missions.

Milner’s plan is far more ambitious. Each of his tiny spacecraft will weigh just a gram or two (about as much as a paperclip). Each will be attached to a sail. A huge Earth-based laser will blast them to 20 percent the speed of light. At that speed, far beyond anything we’ve accomplished in space, it will take about 20 years for the fleet to reach Alpha Centauri, which more than four light years away. For comparison, Voyager 1 spacecraft took a lumbering 36 years just to exit our solar system, a fraction the distance.

Milner told Popular Science that the probes will also employ tiny thrusters to correct course, in an attempt to fly by the distant star system and gather as much data as possible. At that speed—more than 130 million miles per hour—the spacecraft will have about 24 hours to collect information as it flies by the star system. It will send the data back to Earth with an onboard laser. Then, Milner and his team—and the world—will wait. It will take four years for that light message to make its way back to Earth — if everything goes according to plan.

Milner’s $100 million will go toward research over the next few years, to get current technology scaled to the level that would be required to complete this interstellar mission. The laser, the ships, and the sails all exist in much simpler forms than would be required. Milner expects the whole project to eventually cost billions of dollars and turn into an international endeavor. In addition to Hawking, has already garnered support from some of the biggest names in space exploration, such as experimental cosmologist Philip Lubin, and Pete Worden, former director of NASA’s Ames Research Center.