Our local black hole is shining extra bright, and we aren't sure why. 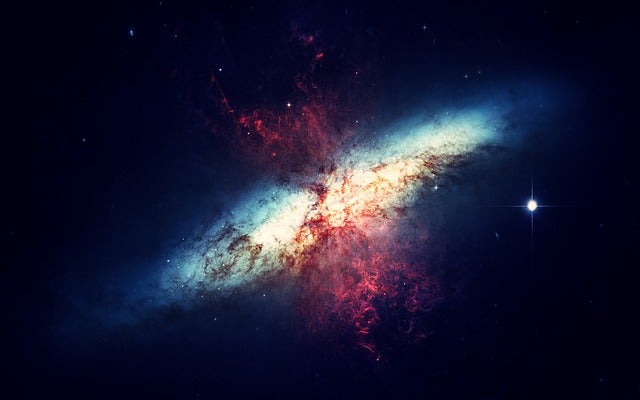 Something weird is going on at the center of the Milky Way, and astronomers are scrambling for answers.

At the heart of our pinwheeling galaxy lies a black hole with some four million times the mass of the sun stuffed into an area roughly the size of Earth’s orbit. Known as Sagittarius A* (which is pronounced “Sagittarius A star”) or Sgr A* for short, it creates a tumultuous environment, whipping stars around at millions of miles per hour and shredding any asteroids that come close with the force of its gravity. The beast now appears to be acting even more aggressively than usual, flashing twice as brightly as astrophysicists have ever seen before. Researchers spotted the flareup this spring, and speculate that it’s coming from an as yet unidentified clump of matter unexpectedly falling onto the black hole.

“It was so bright you could see it in real time,” says Andrea Ghez, the principal investigator of the Galactic Center Group at UCLA, which recorded the activity. “It was very clear that something was up this year.”

Black holes themselves can’t emit so much as a photon (they didn’t get their name for nothing), but nearby matter is under no such prohibition. Hot gas in particular is thought to swirl around Sgr A*, forming an “accretion” disk of material destined to stick to the black hole’s surface. The object hosts a fearsome magnetic field as well, and it’s this force that drags charged particles like electrons spiraling inwards, making them glow. Dust stops visible light from making it all the way to Earth, some 26,000 light years out in the disk, but infrared radiation can get around it.

When Ghez and her team started watching the center of the galaxy two decades ago, their main goal was to prove the supermassive black hole existed, which they did indirectly by observing stars buzzing around the galaxy’s core like asteroids around the sun.

Over the last 10 years, new technology at Hawaii’s Keck Observatory has let the group study direct emissions from around the black hole itself. These days the system can take one image per minute, creating a stop-motion movie they can monitor either from Hawaii or UCLA. Sgr A* flickers like a candle, depending on the momentary vagaries of its consumption and the behavior of its magnetic field, but over four non-consecutive nights this spring that flicker became a flash bright enough to recognize by eye.

“Oh, what’s going on,” Ghez recalls thinking at the time. “I don’t think we’ve ever seen it this bright before.”

Here's a timelapse of images over 2.5 hr from May from @keckobservatory of the supermassive black hole Sgr A*. The black hole is always variable, but this was the brightest we've seen in the infrared so far. It was probably even brighter before we started observing that night! pic.twitter.com/MwXioZ7twV

Over the course of their observations, the brightness varied by 75 times—something like looking back and forth between a 100-watt light bulb and a floodlight. On one day in particular, May 13, Sgr A* shone twice as brightly as ever before, compared with hundreds of days of observations spanning 20 years (new analysis techniques have let the group retroactively extract rough measurements from the first 10 years). And the brightness was actually dimming when they switched on the camera, indicating that the peak of the event was likely even more radiant. A statistical test suggests that the chance of catching four nights as bright as they did was just 1 in 2,000.

“Given the behavior over the last 10 years,” Ghez says, “you shouldn’t see something like this happen.”

As for what’s causing this unprecedented activity, no one knows for sure. Inferring one particular interplay between gas, stars, magnetism, and a black hole from a flash in a dusty corner of the sky is a big leap, but the team has some educated guesses.

The top candidate is a change in the accretion (read: eating) process, because more matter streaming toward the black hole means more electrons getting lit up by the magnetic field. One star in particular, S0-2, could have pushed around some material during a close approach last year, or a local clump of gas could have gotten too close.

Alternatively, Sgr A* may not be chowing down on anything unusual. Perhaps its magnetic field snapped, firing a colossal flare analogous to those that come from our sun. Follow up observations, particularly in x-rays and radio waves, will help narrow down the possibilities.

Not knowing how long the flare up will last, Ghez’s team raced to publish their results, which went online in August and will soon appear in the The Astrophysical Journal Letters, faster than any previous work. “One of the points of trying to get this paper out fast is to inspire other people to look at it before things change too much,” she says.

And other researchers are taking notice. Enmanuelle Mossoux, an astrophysicist at the University of Liege in Belgium, called their bright flare “really interesting,” and said it fits with patterns of irregular activity she’s observed in x-rays, including an increased number of large eruptions since 2014. She’d like to see further analysis comparing recent years to see if this year’s flare up fits into a broader ramping up.

Either way, astronomers will have to move fast. Unlike galaxies and other cosmic entities that predate humanity and aren’t going anywhere soon, whatever Sgr A* is up to, it might not keep at it for long. “We typically think of the universe as a very static place,” Ghez says, “and here we can see in real time things changing right in front of our eyes.”