Gaze deep into the universe at galaxy cluster SMACS 0723. 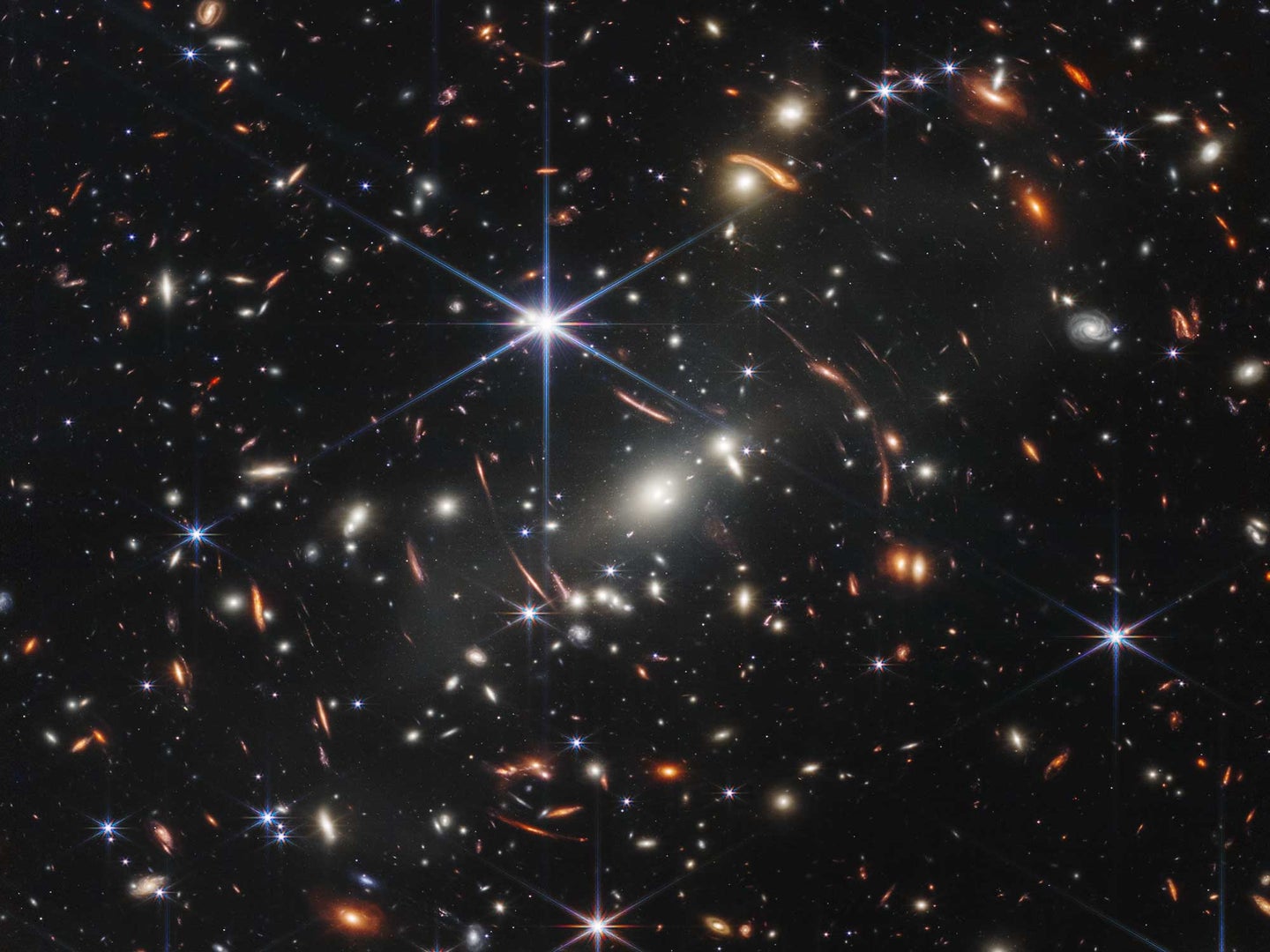 The deepest, sharpest infrared image of the universe to date, courtesy of the James Webb Space Telescope. NASA, ESA, CSA, and STScI
SHARE

Time travel is often portrayed as a superpower or phenomenon in a fictitious, far off future. But for the James Webb Space Telescope, time travel is kind of its purpose.

The James Webb Space Telescope (JWST), was built to peer back into a part of space-time that has never been seen before—when the earliest stars and galaxies formed, more than 13.5 billion years ago. As the largest and most powerful space telescope in NASA’s history, designed in collaboration with the European Space Agency and the Canadian Space Agency, its launch in December of 2021 marked the end of a 17-year construction process and the start of a decade-long voyage into the depths of the universe. After a six-month tune up in space, the first full-color images from the telescope’s infrared camera were revealed in a White House press conference this evening.

The final product is a composite of images taken at various infrared wavelengths over 12.5 hours. At the heart lies the galaxy cluster SMACS 0723, which offers a “deep-field view” of stars in front of it and behind it, according to the NASA page. The phenomenon that makes this possible is called gravitational lensing, and has been used to detect other major space bodies like supernovas and rogue black holes. SMACS 0723 is so far away from the Milky Way, the image we see is from roughly 4.6 billions years ago.

Late last week, NASA teased a longer list of the telescope’s main targets. Among them are the Carina Nebula, nearly 7,600 light-years away, where there are massive stars several times larger than the sun; the Southern Ring Nebula, which is an expanding cloud of gas around a dying star and is about half a light-year in diameter; and Stephan’s Quintet, 290 million light-years away, which forms a compact galaxy group in the constellation Pegasus.

“What’s crazy is that this is just an appetizer of a much deeper field of research that we’re going to study,” says Heidi Hammel, an interdisciplinary scientist on the JWST project. She has worked with the NASA team over the last 20 years to ensure that the design and construction of the telescope, as it adapted over time, met the standards researchers needed to forge deeper into the universe and its history.

The ability to image unexplored parts of the universe like SMACS 0723 is just the starting point. “Figuring out the questions we started with is just half the story of what we’ll learn,” Hammel says. “We have an idea of what we’re going to do, and once we start taking data, we’re going to have more questions because we’ll have reached new boundaries and new frontiers.”

The science-quality captures revealed today aren’t just meant to be crowd pleasers. As Hammel explains, the images from JWST will provide more accurate and meaningful data that can be used to steer future astronomical research. They go leagues beyond “engineering-quality photos,”  which as Hammel explains, consist of very short exposure and can show interference from light. Since the photos are intended to inform design decisions down on Earth, scientists aren’t worried about fine-tuning the characteristics. But for intricately chosen images of the cosmos, “all those characteristics matter,” Hammel says. “We’ve done careful calibration of the cameras and spectrograph, and we have clarity and confidence that [all] this information is from outer space and not just the camera.”

The telescope uses four advanced gadgets to capture images: the Near-Infrared Camera, the Near-Infrared Spectrograph, the Mid-Infrared Instrument, and the Near-Infrared Imager and Slitless Spectrograph with the Fine Guidance Sensor. All these technologies allow JWST to image infrared light and see much deeper into space and its timeline. (NASA’s Hubble Telescope, which launched in 1990 and was one of the largest telescopes at that time, had taken the deepest photo of space until now, capturing galaxies formed 600 million years after the Big Bang.)

The JWST team devised 10 new technologies to make the telescope work, Hammel says. For example, because of the extreme temperatures in space, the sensitive imaging equipment needed specific thermal regulating systems to work. Robert Rashford, president and GEO of Genesis Engineering, the company contracted for this challenge, says that working on JWST was unique.

“This was the first telescope designed this way,” Rashford says. “Anything above the sunshield was cryogenic, so we had to come up with a more balanced approach to keep things warm when they needed to be in operation, so performance would not be compromised in any way.”

[Related: Everything to know about the James Webb Space Telescope’s super-thin sun shield]

Capturing new wavelengths of light presented another challenge. On Earth, the phrase “speed of light” makes sense in trying to describe something fast. We see light at 186,00 miles per second, so it feels instantaneous. But in space, the distances are so vast, the “speed of light” is much more noticeable. Because it takes time for light to travel through space, the light from the dawn of the universe would have to travel extremely long distances for our telescopes to see it. Light from the sun, for example, takes 8 minutes and 20 seconds to reach our eyes. If the sun exploded, we’d only find out after two listens of the classic Beatles song “Come Together.”

What’s more, because the universe is expanding, wavelengths of light are expanding, too. The creation of a star emits light, and as the visible wavelengths of energy travel outward and farther away, they shift to the infrared light band, which can’t be seen by human eyes. But now that Webb can capture those wavelengths, astronomers will be able to observe light from some of those oldest and most distant epochs, where stars and galaxies were born. The images released today are an early example of what JWST can accomplish and how, with this telescope, looking out at space is quite like looking back in time.

“Webb is designed to pick up where Hubble can no longer go,” Hammel says. “Webb has deeper sensitivity and can move out into infrared wavelengths where distant objects are more visible.”

This isn’t to say that Hubble is no longer useful. Different telescopes allow scientists to observe different wavelengths of light, so while JWST trains its eye on the outer reaches of observed space, Hubble can continue projects like its Ultraviolet Legacy Library of Young Stars as Essential Standards to observe star formation.

“One telescope doesn’t hold all the knowledge,” Hammel says. “It’s important not to think that because we have Webb, we’re done. We already know of questions beyond what Webb can do—but at this moment in time, it’s exciting just to open this whole new infrared window.”

[Related: See the stars from the Milky Way mapped as a dazzling rainbow]

For Hammel, these new images reflect much more than a lifetime of work for her, and the many other people involved in the creation and operation of JWST. She sees it as the result of deep global collaboration: More than 300 universities and organizations and fourteen countries have now contributed to the project. Though it may not be immediately obvious to everyone what the scientific significance of these images are, she says, it has the potential to change our understanding of the universe.

“People all around the world came together to build something that will let humanity explore even further into the cosmos,” Hammel says. “It’s an example of how we can work together as a species to do great and wonderful things—and we need positive things and examples of this in our life right now.”

NASA will be sharing the rest of the images after 10:30 a.m. EST tomorrow. Watch the livestream here.