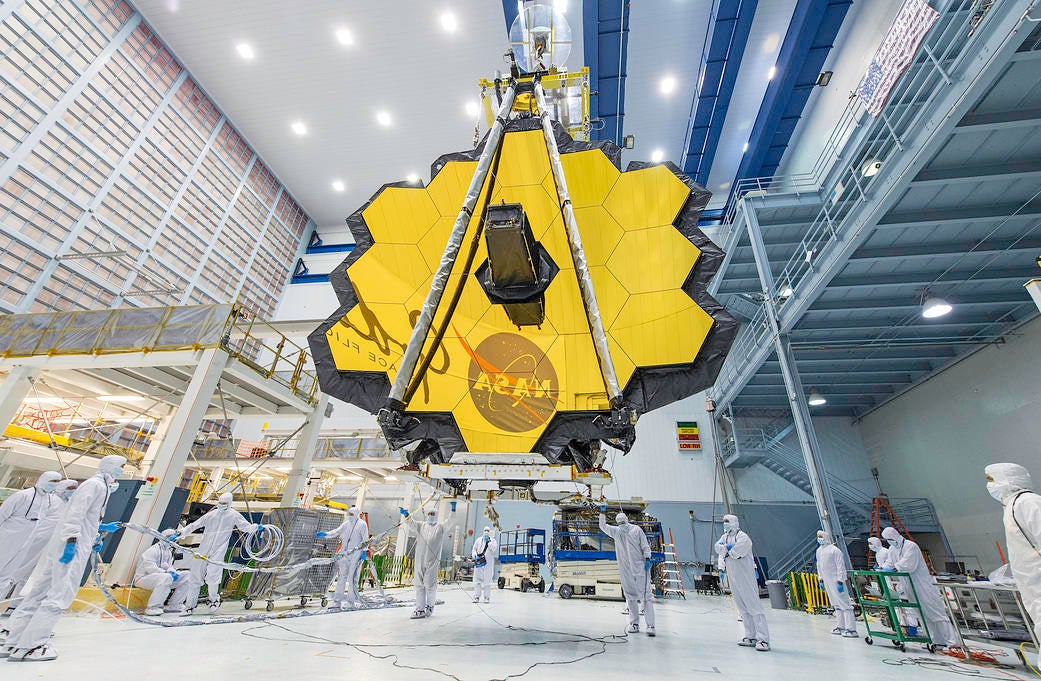 NASA just pushed back the launch of the costly and ambitious James Webb Space Telescope. Again.

The launch is now pencilled in for sometime around May 2020—delayed by human errors and engineering issues, and with a price tag that’s expanding along with the bloated timeline.

We’ll have to wait at least another two years and change to finally see the start of a scientific payoff. Here’s the current situation:

JWST’s 21.3-foot gold coated mirror, divided into 18 hexagonal segments, has to fit inside the nose of an Ariane V rocket, and so do the thin, tennis-court sized membranes that make up the spacecraft’s sun shields.

“The James Webb Space Telescope is our highest priority science project within NASA’s science mission directorate,” NASA Acting Administrator Robert Lightfoot said in a press conference on Tuesday. “It’s really a tremendous feat of engineering, and it’s going to leave a legacy of exceptional science and technical innovations for decades.”

But that legacy requires intricate, never-before-seen engineering. And as with any prototype, things can easily go wrong. Optimistic launch estimates often change as they meet reality. Tears appeared in the delicate membranes that made up the sun shield, for example. The longest was only about four inches, but it set the testing phase back by months.

That was an engineering issue unlikely to be found before testing. But others were more preventable. A transducer in the propulsion system was powered incorrectly, leading to three months of delays. Then a catalyst heater got over-stressed and needed replacing, and the wrong kind of solvent was pushed through the system, causing leaky thruster valves that had to be rehabilitated. The mistakes added up.

A more long-standing issue was that the initial estimates didn’t take account for the sheer amount of time and money needed to develop the entirely new technologies and materials required. That’s not likely to happen again on future missions.

“The way we want to start these missions is to be really careful about how we do the front end of this. We want to develop the technologies before we start the mission, and not go to the starting line before we understand what the technologies are throughout,” Thomas Zurbuchen, associate administrator for NASA’s Science Mission Directorate said at a press conference.

The project team has reason to be so cautious with the mission.

“Webb will journey to an orbit a million miles from the Earth, four times further than the moon. Simply put, we have one shot to get this right before going into space. You’ve heard this before and it rings true for Webb; For us, really, failure is not an option,” Zurbuchen said.

Once it gets into orbit, the telescope will be too far away to send a repair mission (as NASA did with Hubble). If something goes wrong with JWST, there’s no way to fix it, which is why the researchers are eager to catch problems on the ground before they have the chance to turn into a disaster in space.

“Considering the investment that NASA and its partners have made, we want to proceed systematically through the last tests,” Zurbuchen said. “We want this to work well in orbit, so we can’t afford to take any shortcuts or make any mistakes here. We don’t want to make any decisions that make mission success less likely or put any additional risks out there.”

These delays are the latest twist in a long, long saga.

The James Webb Space Telescope was a glimmer in astrophysicists’ eyes when initial designs started circulating in 1996. Studies started to address some of the intense engineering challenges faced by a spacecraft located a million miles from Earth. Then construction began, with a launch date set for sometime between 2007 and 2011. By 2005, the project had an estimated cost of $2.5 billion and was slated to launch in 2011. Then the prospective launch slipped to 2014, with a cost of $5 billion.

By 2010, the estimated cost was $6.5 billion and the launch moved to 2015. In 2011, facing increasing scrutiny, the mission team reassessed the situation and regrouped.

In 2016 construction was finally complete, and NASA hoped to have testing finished in time for an October 2018 launch that they booked in 2015. Last September that launch slipped again, landing around spring 2019. Today’s announcement pushes us back another year.

What will happen with the science?

Delays to the launch also mean delays in gathering the data that made JWST such a scientific priority in the first place. Researchers who were asked to submit proposals with a deadline within the next few weeks now have until February 2019 to plan out their observations; whether peering into the depths of the early universe, examining exoplanets more closely, or something completely different.

In the meantime, other research projects are progressing. NASA’s other upcoming space telescope, the Transiting Exoplanet Survey Satellite TESS, is unaffected and expected to launch next month. Another space telescope under construction, WFIRST, is also expected to proceed—it has faced cost-cutting measures, but not the ballooning budgets of JWST.

What hurdles does it face next?

“If we breach the $8 billion cost that was laid out in congressional appropriations, the project will need to be reauthorized by Congress,” Lightfoot said.

Lightfoot, who is retiring next month, said that NASA will submit a detailed report to Congress this summer, detailing the causes of the delay, the new estimated cost, and the steps they’ve taken to correct those issues.

Those steps primarily involve increased oversight of the project, which NASA is currently assembling at Northrop Grumman. NASA headquarters will take a closer supervisory role of the project than it has in the past, and an external independent review board will oversee the entire project.

“It’s important to note that those corrective actions will also give us better insight into our management of future large space systems, and allow us to be better prepared for any potential pitfalls,” Lightfoot said.

As for this large space system, Congress has an $8 billion cap on the estimated $8.835 billion project. Any funding over the $8 billion mark has to be approved by Congress. The approval of those funds, and where that money will come from remains TBD.

Congress narrowly preserved the JWST’s funding in 2011, after budget overruns and mismanagement landed it on the chopping block. Will it do the same in 2018? We’ll have to wait and see.

“With all the flight hardware 100 percent complete, we’re approaching the finish line for launch readiness,” Zurbuchen said. “However, it looks like we have a way to go before we cross that finish line.”