Oxygen might not lead us to aliens after all

A new study shows us why we may want to rethink how we search for extraterrestrial life. 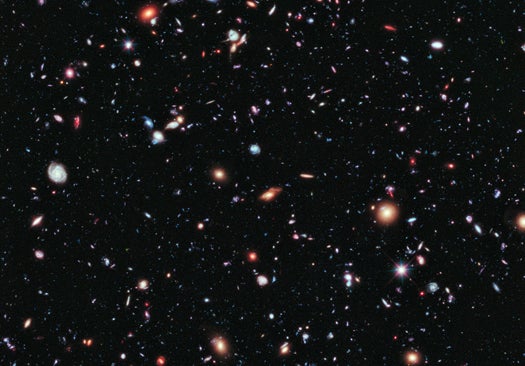 The huge bloom in exoplanet discoveries over the last decade gives us more and more hope we’ll soon find life on another world. While water remains the most important sign that alien life is possible, scientists look for many other chemical elements and compounds that could bolster the ability for extraterrestrial life to evolve and sustain itself elsewhere. Oxygen is obviously one such “biosignature,” given how important it is to complex life here on this planet.

But maybe we’re putting too much stock in the air we breathe. A new study published in ACS Earth and Space Chemistry suggests the presence of atmospheric oxygen on another planet is far from a sure sign.

“The presence of oxygen in Earth’s atmosphere, in significant quantities, is due to the presence of life,” says Nikole Lewis, an exoplanet scientist from Cornell University and a coauthor of the new study. While life could certainly exist without significant access to oxygen, “most of current thinking on how to detect life on other planets focuses on finding planets with atmospheres very similar to Earth’s,” she says.

However, before knowing whether a gas or a combination of gases indicates life, “we have to fully understand the chemistry happening on a planet,” says Chao He, a researcher at Johns Hopkins University and the lead author of the new paper. “Our study provides some insight into the atmospheric chemistry” and suggests certain processes could easily produce oxygen sans biology. Scientists might need to consider that oxygen could be a false flag for signs of alien life.

Naturally, this is not an easy question to investigate. He and his colleagues took advantage of Johns Hopkins’ special Planetary HAZE Research, or PHAZER: an experimental chamber that can simulate a broad range different atmospheric chemistry conditions, from the frigid surface of Pluto to the incredibly hot high altitudes of Venus. The idea is to expose precisely mixed gases to a high energy source (plasma or UV light, both of which can be emitted from a star) to see if hazes (small particles produced by photochemical reactions) will form, and if this will alter the atmosphere’s chemistry itself.

“The idea is to be able to not just simulate chemical processes happening in these atmospheres, but also vary them in a systematic way to try to understand what processes actually dominate the things we are actually able to observe with spacecraft and telescopes,” says Sarah Hörst, a professor of planetary science from Johns Hopkins University and a coauthor of the new paper.

He and his team ended up testing nine different gas mixtures that simulated predicted atmospheric chemistries on super-Earth and mini-Neptune exoplanets (the most abundant types of exoplanets in the Milky Way galaxy). These atmospheres all possessed different amounts of carbon dioxide, hydrogen, and water, and ranged in temperatures between 80 and 700 degrees Fahrenheit.

Ultimately, the team found that UV and plasma exposure altered the selected gas mixtures in such a way that they produced several different types of biosignatures—including oxygen and other organic compounds—distinctly and abiotically. In other words, they showed that living critters aren’t necessary to produce free oxygen—it could be the result of photochemistry, suggesting that oxygen may not inherently be a robust sign of life.

“It will be important for future observations that claim detections of life are able to rule out that these biosignature species are not created through abiotic sources,” says Lewis. “We should continue to investigate how it is possible to produce biologic false positives in the atmospheres of exoplanets, but also determine what combinations of observations spanning what wavelengths would allow us to rule out false positives such as these.”

The study is hampered by the fact that the chemical simulations only ran for a few days, and that the gas mixtures were based on predictions of what exoplanets might possess, rather than direct observations (which we currently don’t have the technology to make). Some of those limitations will be solved over the next decade when instruments like the James Webb Space Telescope can measure the chemical compositions of some distant worlds, but these findings are a good reminder that we shouldn’t necessarily limit ourselves to exoplanets that match an Earth-like template.

The study’s biggest implications may simply be in demonstrating just how unlikely it is we’ll be able to use a simple measurement to find extraterrestrial life. “The experiments themselves are not the final answer,” Hörst cautions, “but they are an important piece of a puzzle that includes observations, computer models, and laboratory experiments. We aren’t the first or only people to say this, but it is going to be really, really, really challenging to search for life by measuring atmospheric composition only.” She emphasizes the need to dig deeper into understanding how other factors—like volcanic activity, comet collisions, and new chemistry we’ve yet to consider—can contribute to biosignature production, even in the absence of biology.

If the truth is out there, it’s more complicated than we ever predicted.