Thunderstorms happen above the clouds, too. 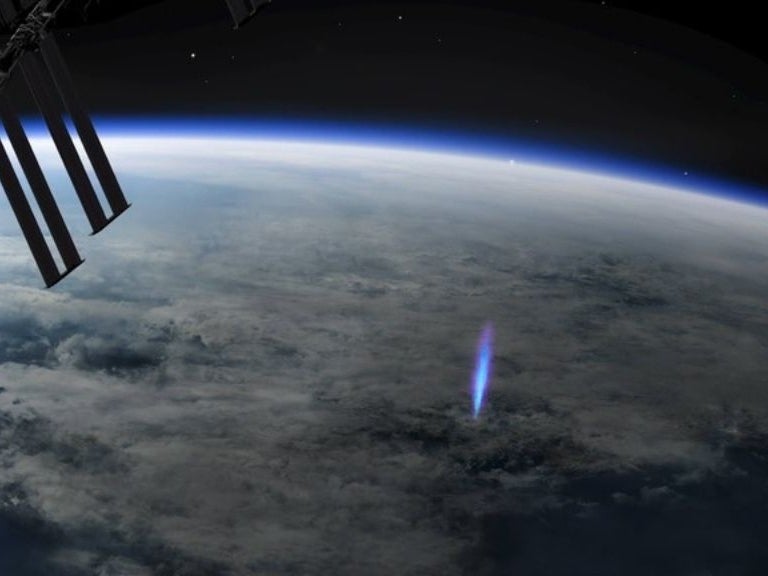 This enormous spike of lightning was spotted from the International Space Station. European Space Agency
SHARE

Thunderstorms certainly treat surface-dwellers to light shows, but there’s also plenty of activity we don’t see here on the ground. Exhibit A: This photo of a projection of “blue lightning” out into space from the thunderclouds above the small Pacific island Nauru in February 2019.

The capture of this phenomenon is detailed in a new paper from the Atmosphere-Space Interactions Monitor (ASIM) team on the International Space Station, published in Nature last week. ASIM uses a collection of cameras, visible and UV spectrum light detectors, and X- and gamma-ray detectors to look for electrical interactions above thunderclouds in the hopes of capturing space lightning.

The paper describes not just the blue jet itself, but also a few of its friends—four smaller flashes at the top of the clouds that did not project out into the second layer of the atmosphere, known as the stratosphere. Instead, these flashes stayed in the clouds of the first layer, the troposphere. While we don’t know much about blue jets and other varieties of space lightning, the authors of the paper propose that blue jets appear as a result of an “electric breakdown” between the positively charged and negatively charged sections of storm cloud cover. When the opposing charges switch places, static electricity is released and gives birth to the flash of blue seen above the clouds. It’s somewhat akin to when we touch an object and feel the occasional static shock—electrostatic energy builds up, and when it sees a place to go, it makes the jump.

The four smaller flashes that accompanied the star of the show were identified as something called “elves.” Short for Emissions of Light and Very Low Frequency Perturbations due to Electromagnetic Pulse Sources, elves are light flashes that appear when radio waves push negatively charged electrons through the ionosphere, a region of the atmosphere that extends from 50 to 600 miles from the Earth’s surface. This part of the sky contains a high density of free ions and electrons, and when the electrons collide with other particles, energy is released as light and elves take form.

There is still much work to be done to better understand blue jets, elves and other light shows in space such as the northern lights—but ASIM’s tools will be very useful in exploring them more. These observations are also key for understanding how our weather systems work here on the surface, including what influence these lightning patterns might have on the concentrations of greenhouse gases in the atmosphere. “This paper is an impressive highlight of the many new phenomena ASIM is observing above thunderstorms and shows that we still have so much to discover and learn about our Universe,” Astrid Orr, the European Space Agency’s Physical Sciences Coordinator for human and robotic spaceflight, said in a statement last week.