NASA’s most prolific planet-hunting telescope is taking a nap

But the end is fast approaching. 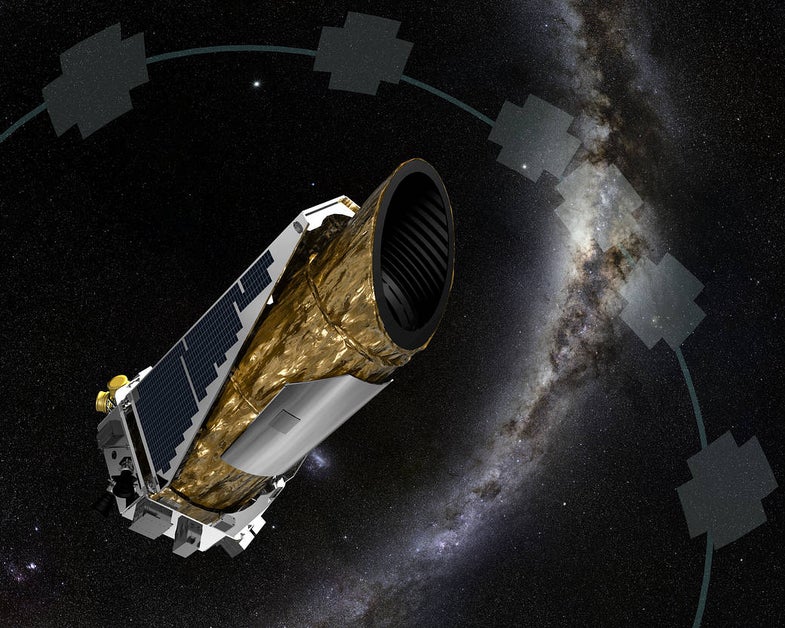 If anything deserves a rest, it’s Kepler. In less than 10 years since it launched, the Kepler Space Telescope confirmed the existence of over 2,500 worlds beyond our own, more than any other observatory.

Last week NASA engineers working on Kepler found that the fuel level on the spacecraft was approaching dangerous levels, so they decided to pause science operations and move the spacecraft into hibernation mode to conserve fuel and preserve whatever data it has slready collected.

This particular 83 day campaign focused on an area of sky near the constellation Cancer and was set to observe star clusters, binary black holes, asteroids, exoplanets, and more. It got about two good months of observing in before the researchers decided to put it to sleep.

On August 2, it will move into position so that it can send whatever data it has already collected back to Earth. From there, the engineers back home might decide to boot it up again if there’s enough fuel left to start the next observing campaign.

“It’s like trying to decide when to gas up your car. Do you stop now? Or try to make it to the next station? In our case, there is no next station, so we want to stop collecting data while we’re still comfortable that we can aim the spacecraft to bring [the data] back to Earth,” Charlie Sobek, system engineer for the Kepler space telescope mission, wrote back in May.

This is just the latest in Kepler’s trials. In 2013, after two of the spacecraft’s gyroscopic wheels failed, the team working with the telescope back on Earth was unable to keep it steady and focused enough to continue taking data. Then researchers came up with a solution: use the sun to steady Kepler. Revived, Kepler was reborn as K2 and discovered hundreds of other exoplanets, scanning segments of the sky in campaigns spanning 82 days.

Given the recent decision to cut short the 18th campaign, it’s unlikely that Kepler will make it to campaign 20, the last campaign that researchers were asked to submit research proposals for, even if it does have enough fuel for a 19th. But when K2 started in 2014, the engineers only thought they had enough fuel for 10 campaigns.

TESS will pick up where Kepler left off, monitoring over 200,000 stars within a 300 lightyear radius of Earth. Scientific data from that mission is expected starting January 2019, and researchers will use techniques they honed during Kepler’s missions to identify even more planets—with analysis now taking weeks instead of months or years.

One recent study, published in June, used data collected by KST to identify a potential planet orbiting a bright nearby star in just a few weeks time.

“We found one of the most exciting planets that K2 has found in its entire mission, and we did it more rapidly than any effort has done before,” Ian Crossfield, an MIT professor who led the study, said in a statement. “This is showing the path forward for how the TESS mission is going to do the same thing in spades, all over the entire sky, for the next several years.”