Everything’s bigger in b Centauri—including one of the most enormous planets ever found. 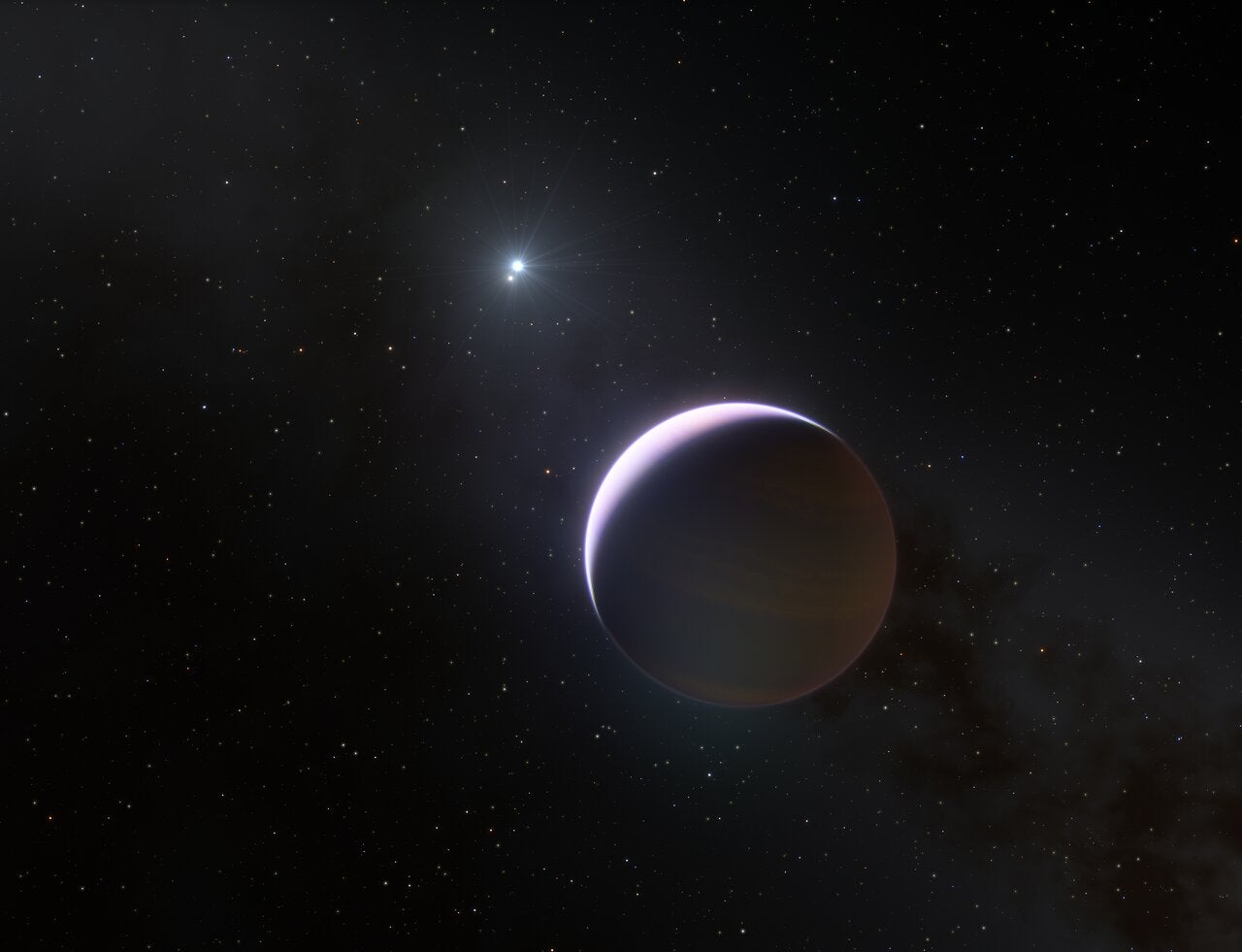 An artist’s impression of the planet b Centauri b, which orbits a binary system. ESO/L. Calçada
SHARE

Astronomers have discovered a massive exoplanet orbiting around the binary star system b Centauri. The two stars are so hot and huge that researchers previously thought that no planet could exist around them.

B Centauri sits in the Centaurus constellation, some 325 light-years outside of our solar system. Its main star is more than three times hotter than our sun, and its two stars have a combined weight of roughly 6 to 10 suns. Until now, no planet has been found orbiting stars more than three  times our sun’s mass. The new exoplanet, b Centauri b, is also a whopper—it probably has a similar gaseous composition to Jupiter, but it’s at least 10 times more massive. It’s one of the biggest exoplanets ever discovered. And with a distance of 52 billion miles separating b Centauri b from its stars, it has one of the widest orbits ever detected. Astronomers captured images of the planet using the European Southern Observatory’s Very Large Telescope in Chile, and the findings were published in Nature on Wednesday.

“Finding a planet around b Centauri was very exciting since it completely changes the picture about massive stars as planet hosts,” lead study author Markus Janson, an astronomer at Stockholm University, Sweden, said in a statement.

The stars of b Centauri are relatively very young—just 15 million years old, compared to our sun’s 4.6 billion years. “The planet in b Centauri is an alien world in an environment that is completely different from what we experience here on Earth and in our solar system,” co-author Gayathri Viswanath, a PhD student at Stockholm University, said in a statement. “It’s a harsh environment, dominated by extreme radiation, where everything is on a gigantic scale: the stars are bigger, the planet is bigger, the distances are bigger.”

B Centauri now has planetary scientists rethinking the parameters around planet formation—the binary stars’ combined size and heat, and the tremendous amount of radiation they must emit, should create an environment inhospitable to planets. “It poses quite a challenge to our models,” Michael Meyer, a University of Michigan astronomer and co-author of the new study, said in another statement. “But this is what makes it exciting—when you are proven wrong, you learn something.”

Astronomers have yet to figure out how b Centauri b came to be, and will now be working to untangle this unlikely system’s origin story, a “mystery at the moment” that will be “an intriguing task to try to figure out,” Janson said in a statement.

Since 1992, scientists have confirmed the existence of thousands of exoplanets, revealing the often surprising diversity of conditions where planets can form. “It seems that no matter where we look—around small or big stars, single stars or binary stars, alive stars or dead stellar remnants—we always find planets in some form,” Janson told Gizmodo, “even in places we didn’t think possible.”