The Most Earth-Like Alien World Yet Has Been Found: Kepler 452b

And it could provide a glimpse into our planet's future 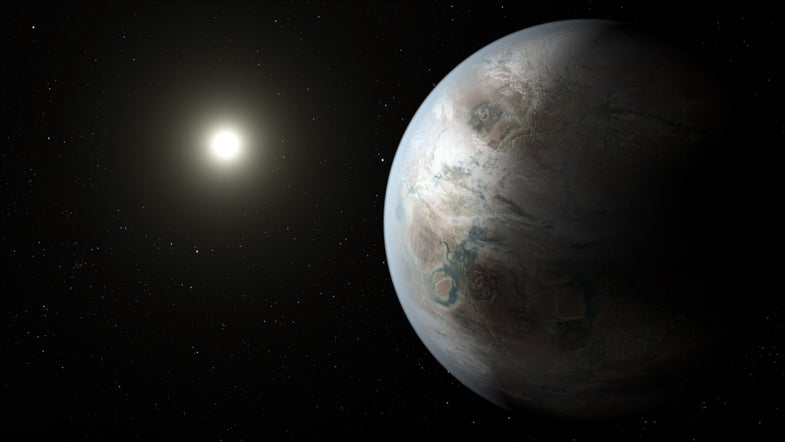 It’s a big galaxy, and there are a lot of planets out there. The Kepler Space Telescope has already discovered more than 4,175 possible planets, and today it’s adding another 500 to the list–including an Earth-like world that could show us a preview of our planet’s future. Some of the exoplanet candidates may turn out to be just sunspots or other anomalies, but an estimated 80 percent are expected to be real planets.

Of the 500 newcomers, 12 are less than twice the size of Earth, and 9 orbit their stars at a distance that’s just the right temperature for liquid water to be able to survive on the planet’s surface.

The new candidates come from older Kepler data, collected before the telescope’s second reaction wheel broke in 2013. Although the telescope’s mission changed after the failure, the data it collected during its original 4-year stint is still a treasure trove for astronomers.

“We’ve been refining our analyses, learning more about what Kepler data looks like, and how the noise behaves,” says Kepler mission support scientist Jeffrey Coughlin, who led the study. To discover new candidates, he says, “we clean up the data, reduce the noise, and tune all our processes.” By further refining their algorithms, Coughlin’s team expects to announce another set of exoplanet candidates from the same data next year.

From the new set, Kepler 452b has already been confirmed as a planet–and it may be the most Earth-like exoplanet discovered yet. Located 1,400 light-years away, it’s just 60 percent larger than Earth. It orbits a star that’s similar to our Sun (just a little bit bigger and brighter), and the planet orbits at a distance similar to Earth’s distance from the Sun.

“I would say it’s definitely the most similar planet to Earth in terms of its size, temperature, and type of star it orbits,” says Coughlin.

Kepler 452b may be a rocky world, and since its star is about 1.5 billion years older than ours, the planet may give us a peek into Earth’s future.

Seth Shostak from the SETI Institute (Search for Extraterrestrial Life) told Popular Science that they’ve already scanned Kepler 452b with the Allen Telescope Array, looking for radio signals emanating from any potential lifeforms there. The planet appears to be silent, at least in the wavelengths between 1 and 10 Gigahertz–so if it really is an Earth analog, perhaps any beings there have already destroyed themselves through climate change. (Joking, sort of.)

The planet appears to be silent.

Although other exoplanets are closer in size to Earth than Kepler 452b, they orbit smaller red dwarf stars. That means less light for the planet, and possibly a tumultuous and fiery history that could preclude any life evolving there.

Scientists estimate that there could be upwards of 100 billion planets in our galaxy, and that one in four Sun-like stars could have an Earth-like planet orbiting in its habitable zone.

“Kepler 452b takes us one step closer to understanding how many habitable planets are out there,” said Joseph Twicken of the SETI Institute and the lead scientific programmer for the Kepler mission, in a press release.