On this blisteringly hot metal planet, a year lasts only 8 hours

The years are extremely short and hot on planet GJ 367b. 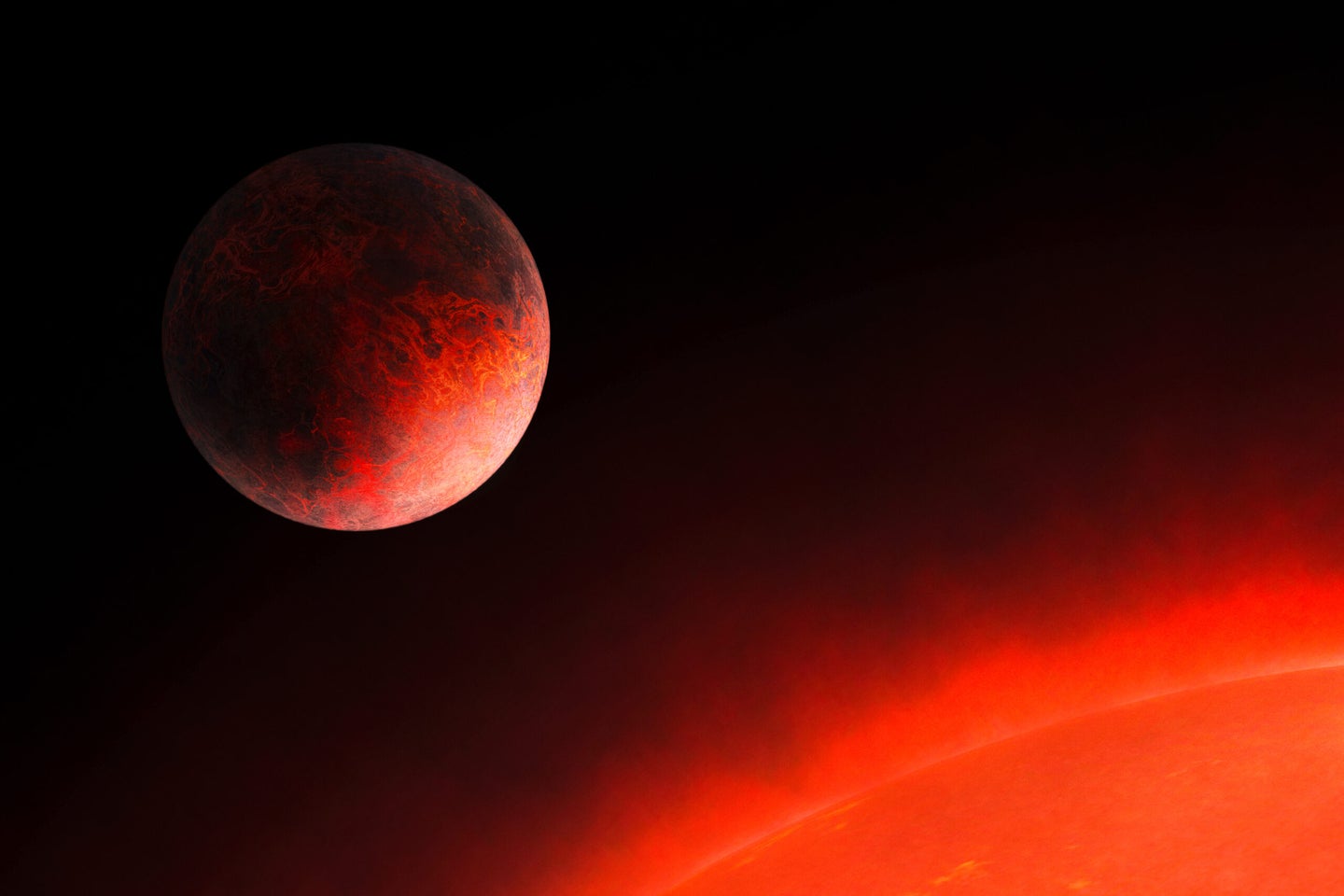 An illustration of exoplanet GJ 367b orbiting its star. SPP/Patricia Klein
SHARE

A team of astronomers used data from the Transiting Exoplanet Survey Satellite (TESS) to find an exoplanet so close to its star, its surface could be molten. This “ultrashort-period” planet has a tight orbit, with a year lasting only eight hours—alien birthday parties there would accumulate so fast they’d get very tedious.

The exoplanet, called GJ 367b, is three-quarters the width of Earth, falling into the elusive category of sub-Earth. Earth-size and smaller exoplanets are difficult to detect. The go-to methods of exoplanet detection rely on measuring how much light a planet blocks while crossing its host star, or looking at how the star wobbles as the planet orbits it. Both of these features are harder to spot for smaller, lighter planets. GJ 367b is one in only a handful that have been so closely characterized.

Among these tiny worlds, “our planet is probably one of the only ones that have a precise mass and radius [measurement],” which the team could use to guess at the planet’s interior, says Kristine Lam, an exoplanet astronomer at the German Aerospace Center and lead of the study, published today in the journal Science.

The abundance of would-be birthdays on GJ 367b probably won’t be an issue, in reality, because the sun-facing surface of the planet is more than 2600°F. That’s close to the temperature at which “metal will start to melt,” Lam says.

GJ 367b is a unique planet, unlike anything scientists have observed before, says Mercedes López-Morales, an astrophysicist at the Center for Astrophysics | Harvard & Smithsonian who specializes in exoplanets and was not involved in the study. The team’s detection is solid, too, she says.

The team determined the size of the planet with TESS, and then used a ground-based instrument at the European Southern Observatory called HARPS to measure the mass of the planet by looking at the star’s “wobble.”

For a typical star and exoplanet, these instruments wouldn’t have the precision to measure a sub-Earth exoplanet. But in this case, the scientists got lucky; the host star is a red dwarf that is bright and small relative to other stars. Both these attributes help the exoplanet’s signal stand out, Lam says.

The team estimated the planet’s density from its radius and mass. Astronomers can’t directly measure a planet’s core from this distance, but they can use models to infer what layers probably make it up. The team thinks the interior cross-section of GJ 367b is likely about 86 percent iron. That’s similar to Mercury in our solar system, which is about 83 percent iron, Lam says. Though this planet, because it’s about ten the mass of Mercury, is its own beast, López-Morales points out.

Lam plans to apply for time on the James Webb Space Telescope to investigate what kind of atmosphere the planet has–if it has one at all. The planet’s original atmosphere should be long gone, but it’s possible that vaporized elements on its hot surface form a secondary atmosphere, López-Morales says.

Scientists don’t have enough evidence to be confident how a planet like GJ 367b formed. López-Morales says she thinks it’s unlikely the planet formed so close to its star, because this region usually lacks enough material for a planet to form.

It could have originally been Earth-like but had its rocky mantle blown apart by a massive impact–perhaps involving two smaller planets that scattered their mantles and merged into one, López-Morales says. Or it could be a remnant of a much larger gaseous planet that was whittled away by the star’s rays.

But the argument that the planet couldn’t have formed that close to the star is based on certain planet-formation models, not direct evidence, says Li Zeng, a researcher studying exoplanets at Harvard’s Department of Earth and Planetary Sciences, who was not involved in the study. “The frank answer is, we don’t know.”

If the planet used to be a gas giant, wherever it formed, that could drastically change how scientists understand the structure of gaseous planets because it “gives you a hint that gas giants actually have heavy element cores,” López-Morales says.