Found: A star that last dazzled astronomers in 1437 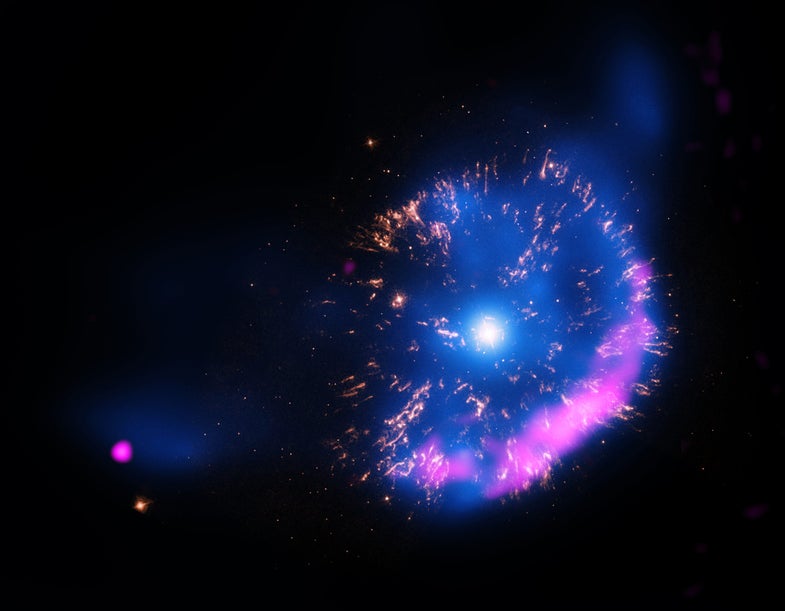 In the hours before dawn on March 11, 1437, the constellation Scorpio rose over the horizon near Seoul, Korea. Astronomers tasked with scanning the sky and noting nightly changes—aurorae, comets, shooting stars and the like—noticed something odd about the group of stars they called the tail of the dragon, one of the lunar mansions of the night sky.

There was a star there that they’d never seen before.

The bright light persisted in the sky for 14 nights before vanishing, it’s position diligently recorded by researchers all the while.

In a paper published today in Nature, Mike Shara of the American Museum of Natural History and colleagues describe how they hunted down a star whose surface exploded over half a millennium ago.

What the Korean astronomers saw in 1437 was a classical nova. Unlike the more famous supernova, the classical nova is not a destructive process. Supernovae are massive star-destroying explosions. Novae, on the other hand, happen in binary star systems, where a white dwarf and a red dwarf circle each other like two sparring partners.

Modern astronomers see novae fairly regularly, with around 10 bright enough to be seen with the naked eye occurring every year. But these systems usually take about 10,000 to 100,000 years to build up enough hydrogen to go nova again. In between their big, bright, let-it-go moments they sit nearly invisible in the sky, though researchers have noticed smaller entities called nova-like vairables and others, called dwarf novae, which display much smaller brightening events.

Back in 1986, Shara proposed that classical novae, nova-like variables, and dwarf novae were all part of the same kind of system, just in different stages of development. Over the next 30 years, he and colleagues were able to find dwarf novae inside the shell of exploded gas that indicated a classical novae, but there was no direct connection between them—no unbroken chain of evidence that showed that the two celestial phenomena were one and the same.

Shara knew about the Korean nova, and he and other astronomers spent years looking through star charts, photographs, and records trying to find evidence of dwarf novae in the same place as that massive brightening 580 years ago. But the area between the two stars that historians believed the text referred to were devoid of the evidence Shara was looking for.

Eventually he gave up, putting aside that particular quest. But he came across the file again later, while cleaning his desk. At that point, Harvard had begun to digitize its incredible collection of glass-plated images of the stars, a record of the night sky that stretched back well over 100 years. Shara figured he might as well use the database to check on a larger area than the space he’d spent years scouring.

And a mere hour and a half after he started the search, he found what he’d spent years looking for.

“It was the next two stars over. There it was, just staring at me.” Shara says. “I have to say, when I got it it was a few minutes of simultaneously dancing around my office and pounding my forehead in frustration,” he recalls, laughing.

With the precise location and photographic records in hand, he was able to show that what had once been identified as a planetary accretion disk—a planetary system in its infancy—was really one of these binary star systems within a blown-out hydrogen shell that burst off the white dwarf 580 years ago.

He and his co-authors also identified three other dwarf novae that occurred within the past century on the same star using the photographic plates.

A dwarf nova occurs when hydrogen from the red dwarf is pulled off and begins to build up in a ring around the white dwarf companion. When enough hydrogen builds up in the ring, the ring collapses and is pulled down to the surface of the white dwarf, building up a layer of hydrogen that will eventually contribute to its big show—a classical nova—in thousands of years.

Though the two stars are companions in the vast reaches of space, it’s far from a healthy relationship. Eventually, after cycling through enough nova cycles, the red dwarf will shrink as the white dwarf devours its hydrogen. It will become a brown dwarf, then a Jupiter-sized planet, then all that remains will be its rocky metal core. Even this the white dwarf will take, smashing it apart into an asteroid belt— and eventually smooshing the rock out across its own surface.

“It doesn’t end well for the red dwarf—cannibalized by its white dwarf companion and then shredded,” Shara says. But at least their violent partnership is helping scientists understand the life cycle of some of the most elusive stars in the sky.