This truly bizarre exploding star might be a zombie of sorts 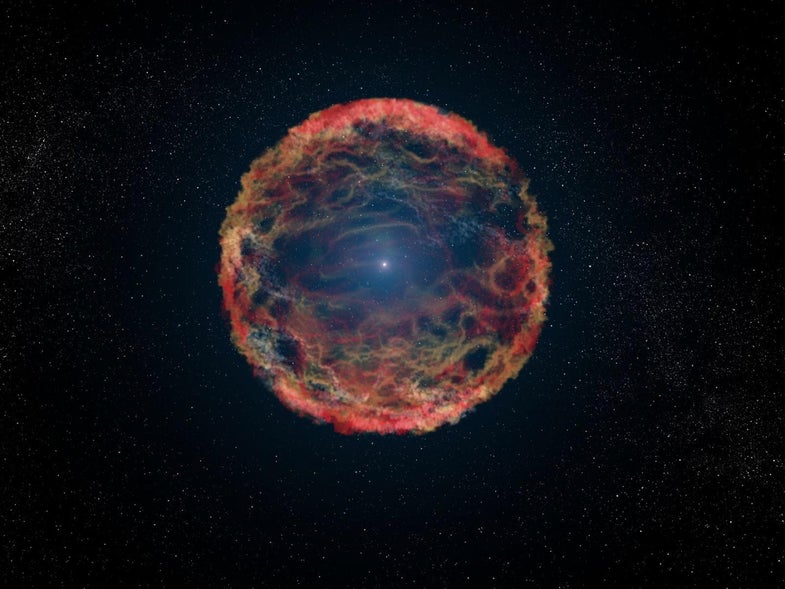 One persistent tenet of poor science communication is the use of the word “baffled.” Especially in the UK, where scientists are often called “boffins.” Boffins baffled by new discovery just sounds too good not to put in a headline, amiright? But it really grinds scientists’ gears to see such a statement, because the field is rarely actually baffled. Science isn’t some set body of facts that can never be contradicted without total puzzlement; it’s a method of inquiry by which we steadily accrue small increases in understanding. Findings are often controversial if they suggest a major paradigm shift might be around the bend; they’re often at least mildly surprising, because there’s a lot of stuff we don’t know yet. But hold onto your butts, because this one is actually baffling—in the best possible sense.

In a study published recently in Nature, astronomers describe the strange and unprecedented case of a star that just wouldn’t die.

“When I saw the proofs of the paper it kind of blew my mind,” study author Nick Konidaris of the Carnegie Institution for Science told Gizmodo. Every parent thinks their child is astounding, so it’s not unusual to hear researchers talk this way about studies they’ve authored. But other experts agree.

“I’m not sure, and I don’t think anyone else is sure, just what the hell is happening,” astrophysicist Stanford Woosley, at University of California, Santa Cruz—who wasn’t involved in the study—told Space.com. “And yet it happened, and so it begs explanation.”

“Every supernova so far observed has been considered to be the terminal explosion of a star,” the authors note in the opening line of their study. The explosion part is still definitely true, but these new findings bring the “terminal” bit under new scrutiny. But before we explain what’s so whack-a-doodle about this particular cosmic explosion, here’s a refresher on more run-of-the-mill supernovae:

All the usual signs point to the object iPTF14hls (really rolls off the tongue, doesn’t it?) being a type II supernova. These come about when massive stars give up the ghost. The nuclear fusion that powers them runs out of fuel, and the heavier elements that start to fill their cores just sit there—a star can’t get energy by fusing things heavier than iron. Finally the core collapses in on itself, which eventually causes the star’s outer layer to burst away in a big, bright explosion. Those outer gases head out into space—sometimes even forming heavy elements like gold, thanks to the incredible energy of the explosion itself—where they sow the seeds of future stars and planets. The pesky core stays behind to turn into a neutron star or a black hole, depending on its mass.

This explosion happens quickly—within a matter of seconds, as most explosions do—and the light left behind dims within a few months.

What’s so weird about this one?

As with so many things, it all comes down to location and timing.

For starters, iPTF14hls showed up in the exact same spot as what sure as heck looks like a supernova in an image taken in 1954. The researchers say they’re almost certain that this isn’t a coincidence; with what we know about the rarity of supernovae (but what do we know about anything anymore???) it’s unlikely that such a close neighbor would have exploded so soon before. Finding two such events so close to each other would be an astronomical first in its own right, the study authors told The Washington Post, so it seems awfully fishy that such an unprecedented observation would just happen to involve such an oddly behaving star.

That brings us to part II of iPTF14hls’ weirdness, and the quirk that’s making many people call it a “zombie” star: the light from its explosion kept shining for almost two years. That’s around six times longer than is typical, which would be plenty intriguing on its own. But during that period, the light didn’t just persistently get dimmer; it varied wildly, and irregularly. That suggests that iPTF14hls was periodically re-exploding the entire time.

When you put those two facts together, it’s tempting to imagine that this unusual star survived its 1954 blowout to start all over again in 2014. And it turns out there’s already a theory out there that would explain this: the pulsational pair-instability model. This theory posits that a really massive star (at least 100 times the mass of our sun) could actually explode a few times before actually dying. The flashes seen before the star’s true grand finale would basically just be the object blowing off steam, becoming less stable but not yet truly going supernova.

“According to this theory, it is possible that this was the result of a star so massive and hot that it generated antimatter in its core,” co-author Daniel Kasen of the University of California, Berkeley told the BBC. “That would cause the star to go violently unstable, and undergo repeated bright eruptions over periods of years.”

This would be the first real-world example of the theory, and the study authors note that it’s not a perfect match for the data they collected—it’s just their best guess. Really, they’re kind of. . . baffled.

“For now, the supernova offers astronomers their greatest thrill,” wrote Stanford Woosley of UC Santa Cruz in an op-ed on the study for Nature. “Something they do not understand.”

It’s possible that iPTF14hls doesn’t totally fit the theoretical model because the model is a little bit wrong, but it’s also possible these scientists have observed something totally new. The fact that the object seems like a fairly run-of-the-mill supernova (save for its strange timespan) might suggest that it’s not even that unusual of a phenomenon. We don’t actually know enough about how supernovae work to know that this is truly a rare event. To learn that—and to find out if iPTF14hls stuck around and kept exploding even after this most recently imaged burst of light—scientists will just have to keep stargazing.