Something’s got the Kuiper belt’s rocks off, and there’s a scramble to find it. 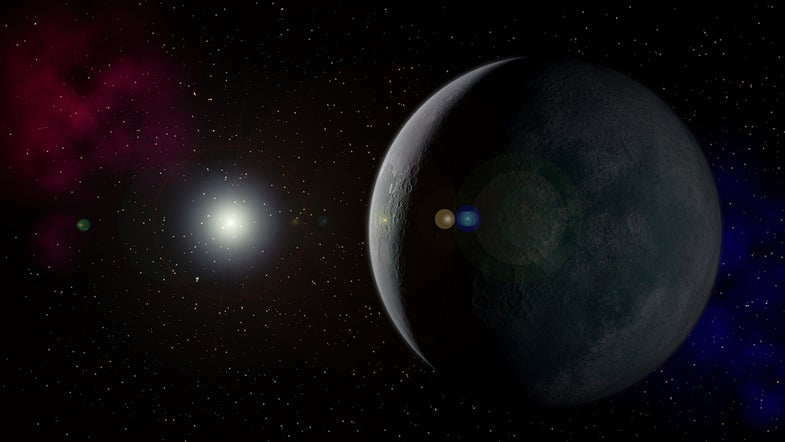 For a few years now, the astronomy world has been hard at work searching for a ninth planet of the solar system (no, not Pluto, it’s time to move on). There’s evidence of something massive hanging around in the outer reaches of the solar system—10 times more massive than Earth, big enough to gravitationally warp the orbits of smaller objects in its vicinity, 10 to 20 times farther away than Pluto. And yet it apparently continues to hide in plain sight, eluding our best efforts to observe it directly. If a planet orbits the sun and nobody’s there to see it, is it even real? The latest tantalizing bit of evidence to back up Planet Nine’s existence is an asteroid called 2015 BP519, first discovered three years ago in the vast reaches of the Kuiper belt (the region of the solar system beyond Neptune). We now know the asteroid possesses a bizarre elliptical orbit that suggests something gigantic is pulling at the little bugger as it tries to make its journey around the sun.

“I’m pretty excited about the new object,” says Caltech astronomer Mike Brown, one of the first people to characterize Planet Nine, who was not involved with the study. “It is the predicted link between the very distant elongated orbits that we’ve known about and the much closer tilted orbits that we’ve seen.”

In a new paper led by Juliette Becker, a graduate student at the University of Michigan, a group of researchers outline the discovery of BP519 through the Dark Energy Survey, an international collaboration that uses visible and near-infrared observations to study the expansion of the universe. It’s not exactly a typical object-hunting tool, but the DES is optimized for observing objects above the planet of the solar system—objects like BP519, which has an orbit tilted 54 degrees with respect to the solar system’s plane.

“The moment we saw its fitted orbit, we knew it was a remarkable object,” says Becker. “If the solar system is thought of as concentric rings sitting flat on a table, BP519’s orbit is another, larger oval tilted more than halfway up toward the ceiling.”

That’s where the influence of Planet Nine comes in. “Planet Nine, if it exists, could take objects that start out closer to the table and cause their orbits to change with time to eventually look like BP519’s orbit,” says Becker.

Besides its unique orbital inclination, we also know the object is perhaps the size of a dwarf planet, and its distance from the sun is about 450 times farther than Earth’s.

While other explanations could explain the asteroid’s strange orbit, such as a rogue star flying by the neighborhood, or a scattering effect created by a giant planet migration, none of those theories seem to fit the bill as well as Planet Nine. “At the moment, Planet Nine seems like the most likely culprit to me,” says Becker.

In addition, “this is the first discovery of a Kuiper belt object drawn from a population that was not already mapped out before our formulation of the Planet Nine hypothesis,” says Konstantin Batygin, a planetary scientist at Caltech who has led the investigation of Planet Nine in partnership with Brown. “Our theoretical models predict the existence of exactly this type of inclined orbit in the distant Kuiper belt, and seeing this prediction materialize into observational reality is extremely satisfying.”

Nevertheless, both Brown and Batygin emphasize the new discovery doesn’t do much in helping astronomers actually find Planet Nine. “We now know of so many objects influenced by Planet Nine, that adding a single extra one doesn’t significantly change our view,” says Brown. “Finding a few dozen more would be very helpful though!”

Nor is it certain BP519 even has anything to do with a new planet. “The only totally convincing evidence,” says Becker, “will be a direct detection of Planet Nine.” Something’s got the Kuiper belt’s rocks off, and there’s a scramble to find it.