And its clouds may be made of gemstones 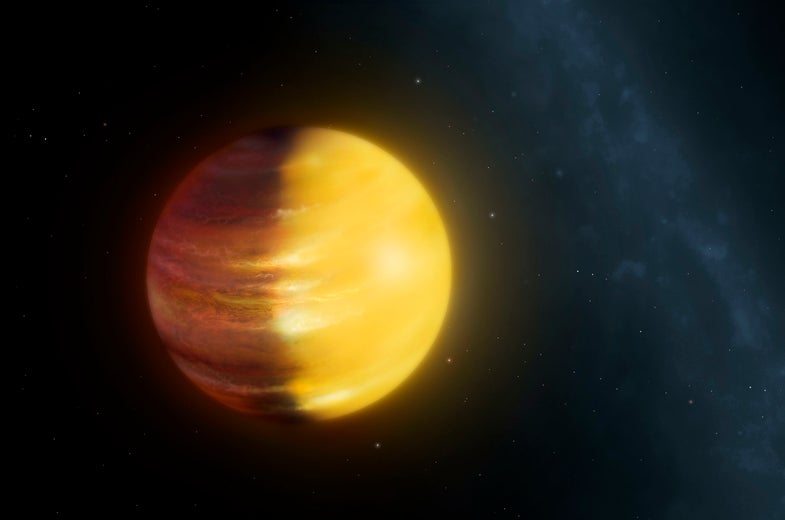 HAT-P-7 b is about 1.4 times the size of Jupiter, and it may have cloudy skies. Mark Garlick/University of Warwick
SHARE

Humanity has gotten pretty good at tracking down planets in other solar systems. Between 2009 and 2013, the Kepler telescope discovered thousands of worlds orbiting distant suns. But finding out what those exoplanets are like has been more of a challenge. Luckily, we’re getting better at it.

On Monday, scientists announced their observation of weather on a Jupiter-like exoplanet for the first time. The planet is a gas giant named HAT-P-7 b, and it orbits a star approximately 1,044 light-years away, and it turns out it might be covered in clouds of corundum––a mineral that makes up rubies and sapphires.

Led by David Armstrong of the University of Warwick, the team analyzed data on some 100,000 stars observed by the Kepler telescope. They studied the light reflected by HAT-P-7 b and found that the brightest point on the planet moves around over months and years. To Armstrong and his team, this indicates that clouds are moving around in the planet’s atmosphere, changing how much light the world reflects.

HAT-P-7 b is tidally locked, meaning that only one side of the planet ever faces its star. That side gets really hot (around 2,600 degrees Celsius) while the dark side stays relatively cool. Those temperature differences should cause strong winds to circle the planet.

Ordinarily, scientists wouldn’t expect clouds to exist on the bright side—it’s so hot they should evaporate. But scientists do expect clouds to form on the cold side, says Armstrong, and “because of the wind, we think some of those clouds are getting to the day side, and that’s what’s changing the brightness on the planet.”

Armstrong and his colleagues suspect the clouds might be comprised of corundum, a colorless mineral that’s typically found in rubies and sapphires. Corundum condenses at temperatures similar to those seen on the gas giant’s day side.

HAT-P-7 b is too hot for humans to visit. And since it’s a gas giant, it doesn’t really have a surface to stand on. But if we could touch down there and look up at the sky, Armstron says, the view would probably be incredible. “You’d be seeing these big, roaring cloud banks being pushed onto the day side and then heating up and getting very bright before burning away.”

This isn’t the first time scientists have detected weather on an exoplanet. Earlier this year, a different team announced that 55 Cancri e—a rocky world about twice the size of Earth—has a hot side and a cold side. Today we learn what the weather’s like on a completely different kind of world.

To study weather on distant worlds, our telescopes need a clear view of the exoplanet over a long period of time. Thankfully, that should get easier a lot easier very soon. NASA’s James Webb Space Telescope, slated for launch in 2018, should give us a closer view of exoplanet atmospheres and what they’re made of. And around 2024, the European Space Agency’s PLATO (Planetary Transits and Oscillations of stars) observatory will also help to characterize these mysterious worlds.

“We see a huge diversity of exoplanets—rocky ones, gaseous ones, hot ones, cold ones, all kinds of different types,” says Armstrong. “Way more than we see in the solar system. There’s no reason that shouldn’t extend to their atmospheres, too.”