Move over, Pluto, DeeDee is the new (potential) dwarf planet in town 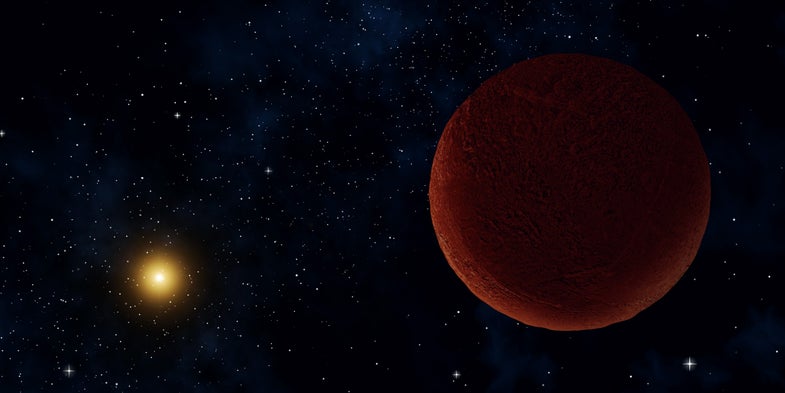 All dwarf planets are equal, but some dwarf planets are more equal than others. Such is the case for Pluto, the world’s most beloved and most opined celestial body. You can keep feeling sorry for the icy planet if you want—or you could celebrate its growing crew of fellow dwarves.

Meet DeeDee: a tiny, probably spherical object that, at roughly -405 degrees Fahrenheit, is icier than the hearts of those who took Pluto out of the planetary family. Its whole circumference is about the length of the Nile River, which (if it were a straight shot) means it would take you about two months to circumnavigate the entire thing.

We’ve actually known of DeeDee for a few years now. She (yes, I’m treating dwarf planets like ships) was first spotted back in 2014, when a team of astronomers and physicists were using the Blanco telescope at the Cerro Tololo Inter-American Observatory in Chile to study dark energy. The work required them to survey chunks of the sky in great detail, which also lends itself to searching for distant objects like DeeDee. Far-off galaxies and stars tend not to move over the course of successive observations, but closer objects do—that’s how they found her. Back then, of course, she was known only as 2014 UZ224. She didn’t earn the “DeeDee” moniker until she was nicknamed DD, which stood for the incredibly creative name “Distant Dwarf.”

It wasn’t until 2016 that the same team reexamined DeeDee to find out more. For that, they needed the Atacama Large Millimeter/submillimeter Array. Its spot in the Atacama Desert in Chile, one of the driest places on Earth, is far away from any other light source, unobstructed by clouds, and 5,000 feet above sea level, which makes it perfect for stargazing. The ultra-sensitive array of dishes helped pick up the distant signal and verify that DeeDee is about 635 kilometers in diameter, which is enough mass for its spin to make it spherical.

DeeDee circles our sun once every 1,100 years in a massively elliptical orbit, though right now it’s about 92 astronomical units away (one AU is 150 million kilometers). At that distance, the light hitting the Atacama Desert took 13 hours to arrive from our dear DeeDee.

And even more exciting than a bunch of stats about a cold, dead rock orbiting millions of miles away? The idea that there are lots more cold objects that could be dwarf planets! The Kuiper belt, which is just past Neptune (the last real planet in our solar system), may be chock full of them. Some estimates put the number around 150, though few have been investigated yet. The point is, there could be more like DeeDee out there, just waiting to be discovered. She’s not alone—and more importantly, neither is Pluto.