"Seeing color in a nebula from a garden in San Francisco? That's pretty cool." 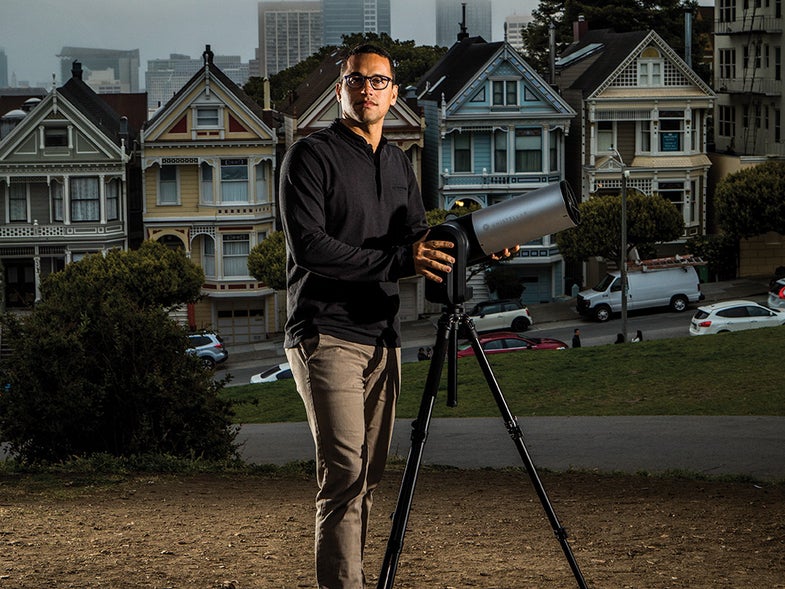 When SETI researcher Franck Marchis was a kid in France, he looked at Saturn for the first time through a telescope and saw the planet magnified from a speck in the night sky to a beautifully ringed orb. There’s a whole universe out there, he thought. Which, of course, he already knew, but it’s different to feel it.

Young Marchis’ studies slewed him toward Chile, where telescopes atop arid mountainscapes capture light from distant heavens. In 1996, he trained one on Io, a moon of Jupiter, and caught something no one had ever witnessed from the ground: a ­far-off volcano belching its innards into alien air.

Hooked on sharpening his view, he concentrated on developing adaptive optics—telescope sensors and mirrors that contort to make up for atmospheric turbulence that otherwise blurs images. With these systems, Marchis got crazy-clear pictures of comets, Uranus, and Neptune. In 2005, he was the first to discover an asteroid with two tiny moons. He also helped develop the Gemini Planet Imager, an instrument that debuted in 2014. It blocks diffracted starlight from obscuring your target orb and then uses spectroscopy to measure its telling features.

Recently, Marchis joined Project Blue, a collaborative effort to snap images of planets in the habitable zones of Alpha Centauri, the star system closest to the sun. “We are kind of like the cartographers of the 18th century,” he says. But for space. The undertaking relies on private funding, so Marchis went to the 2017 Consumer Electronics Show to learn how other people pitch. There he came across a telescope created by two physicists and an engineer. It was an early design of an instrument called the eVscope. They hoped, once perfected, it would reveal the skies to amateurs in colorful detail typically reserved for professionals.

Marchis ended up joining the venture as chief scientific officer. The team had already engineered the eVscope’s sight, but the system needed refining, and its auto-pointing abilities needed work. “We are a small startup, meaning that our work is not compartmentalized and sometimes is outside the scope of our main skills,” Marchis says. Today, with Marchis’ help, the telescope uses GPS and a map of celestial objects to figure out where it is currently pointed, then can aim somewhere else autonomously. Just tell it you want to look at, say, the Orion Nebula.

Viewing it through a typical backyard scope, you’d see the nebula as a black-and-white patch of dots and smudges. That’s because when we gaze up at a dim figure in the dark sky, our eyes don’t receive enough photons to activate our color vision. The eVscope, though, can collect light over time. If you look at the nebula for 10 seconds, you’ll see a ­smaller-​scale color version of what those mountaintop Chilean telescopes show.

While the eVscope will compete with similar instruments when it ships in early 2019, Marchis leveraged his astro bona fides to help connect his product to the scientific community. SETI researchers can alert eVscope owners to here-now-gone-later cosmic events such as comet outbursts or supernova explosions, and users can opt for the telescope’s software to transmit their view of the phenomenon straight to SETI.

Marchis has been testing eVscope ­prototypes with nonprofessionals on Bay Area streets and at star parties. “Seeing color in a nebula from a garden in San Francisco?” he says. “That’s pretty cool.”