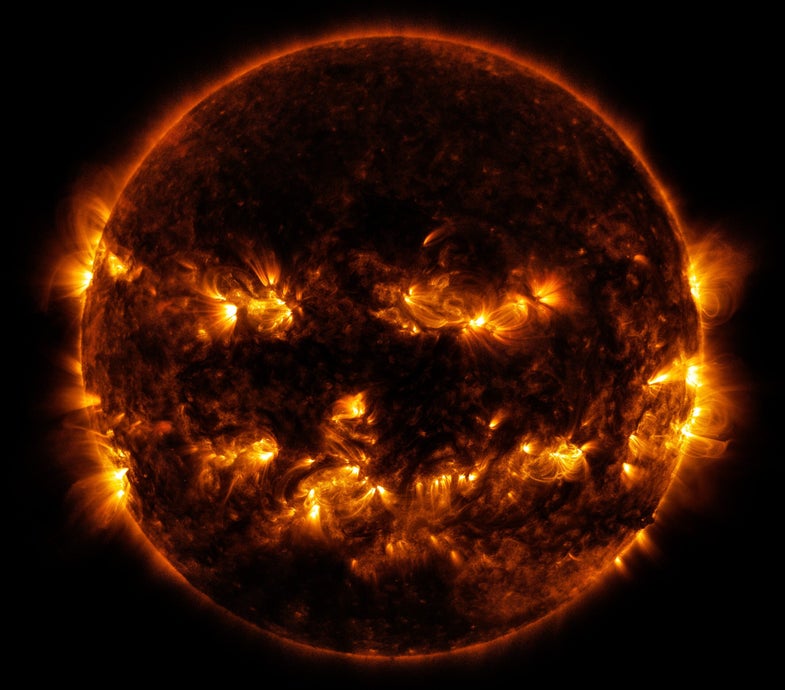 NASA released this October-appropriate image of the sun last week, showing active regions that mimic a Jack-O'-Lantern's toothy grin. It's just a coincidence, but it's nice to see old Sol getting in on the Halloween action. NASA/GSFC/SDO
SHARE

Sunlike stars often come in twos and threes, and astronomers and astrophysicists have long wondered why. Are these pairs and trios born as multiple stars orbiting the same point, or do they meet up when the gravity of one star captures another?

A new analysis out of Harvard and UC-Berkeley suggests that, in fact, nearly all stars are likely born with a twin—including our own sun. The findings, recently accepted for publication in the Monthly Notices of the Royal Astronomical Society, are based on observations of newborn stars in a large cloud in the constellation Perseus.

Stars are born inside egg-shaped clouds called dense cores. These dusty gas clouds block the light from the stars inside and behind them. But fortunately for us, radio waves can penetrate through the darkness. The Very Large Array recently used radio waves to map all the young stars in the Perseus nursery, and the researchers drew on this data to understand the relationships between stars of different ages.

They found that binary stars separated by distances of 500 AU or more—that’s 500 times the distance between Earth and the sun—were extremely young stars less than 500,000 years old. In these systems, the two stars tended to be aligned with the long axis of the egg-shaped cloud.

Slightly older stars, between 500,000 and a million years old, tended to be closer together—separated by about 200 AU—and had no particular alignment within the cloud.

The study authors came up with a variety of mathematical models to explain the stars’ distribution, and concluded that the only way it makes sense is if all stars with sunlike masses start off with distant twins. Over the course of a million years or so, about 60 percent of the pairs split up (the authors think) and the rest ease in closer to one another.

The results support computer simulations that previously suggested stars form in twos, as well as observations that younger stars are more likely than older stars to form binary pairs. But the authors caution that the findings need to be checked in other star-forming clouds, and that more work needs to be done to understand the physics of this phenomenon.

If the results can be replicated, they’ll provide new evidence that the sun formed with a (non-identical) twin located 17 times farther away than Neptune. And it might have been an evil twin to boot. Scientists call this long-hypothesized twin “Nemesis“, because they suspect it booted the asteroid that killed the dinosaurs into Earth’s orbit.

“We are saying, yes, there probably was a Nemesis, a long time ago,” co-author Steven Stahler of UC Berkeley said in a statement.

But Nemesis has never been found. If it ever existed, it must have escaped from the gravitational pull of our sun and run off into the Milky Way, never to be seen again. So much for family.