That ‘alien megastructure’ star might actually be a planet-eater 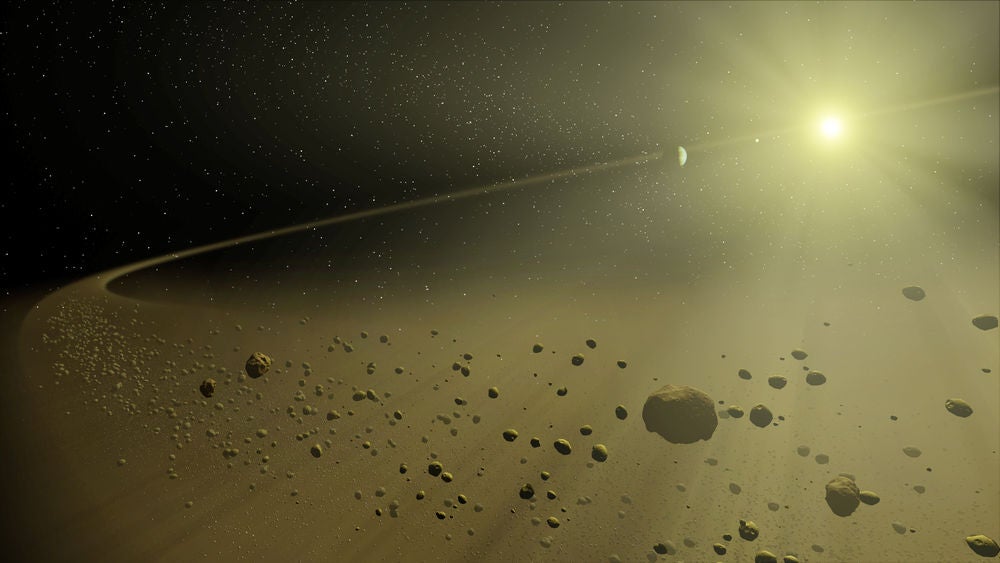 Tabby’s Star probably isn’t surrounded by an energy-sucking alien super-structure. But it may have eaten a nearby planet.

The star, known more formally as KIC 8462852, has baffled scientists by quickly and erratically losing brightness. In observations made over a period of just 100 days, the Kepler telescope captured the star dimming dozens of times, and once dramatically so—by 22 percent.

Having ruled out other, less enthralling explanations, like interstellar dust, some astronomers suggested that advanced alien life might be responsible for altering the star’s luminosity. In theory, a civilization profoundly more advanced than ours could have built a Dyson Sphere around KIC 8462852, a concept developed by physicist Freeman Dyson in the 1960’s. Such a super-structure could (hypothetically) surround a star and collect the totality of its massive energy output. That could charge a lot of electric cars. . . or spaceships.

A new study set to be published Monday in the Monthly Notices of the Royal Astronomical Society suggests that smart aliens aren’t responsible for KIC 8462852’s dimming. Instead, the authors suggest, a planetary collision with Tabby’s Star is to blame. This crash would explain not only why Tabby’s Star has had wild fluctuations in brightness as of late, but why the star has been dimming gradually over the course of the last century.

It seems strange that a spectacular collision between a star and planet would cause a star to become dimmer, explains Ken Shen, a UC Berkeley astronomer and author on the study. But, says Shen, “the star has to eventually go back to being dimmer—the equilibrium state—the state that it was at before the collision.”

KC 8462852’s more recent and erratic dimming episodes, however, can be explained by a mess of debris moving around the star and absorbing its light, sometimes making it appear significantly dimmer to us Earthlings.

One possibility is that a rocky, Earth-like planet was pushed into Tabby’s Star. As it got closer, explains Brian Metzger, a Columbia University astrophysicist and one of the study’s authors, the star could tear off the planet’s mantle, leaving a hot, chaotic bunch of material—perhaps the mass of the moon—off-gassing around Tabby’s Star. The ensuing clouds of gas and dust could absorb Tabby’s light. Meanwhile, the star would consume the planet’s core.

Or, says Metzger, a massive Jupiter-sized planet could have been pushed into Tabby’s Star, leaving some of its moons to be stripped apart by Tabby’s gravity and leaving a wealth of cosmic wreckage in orbit around the star.

But what might have pushed a planet so dangerously close to Tabby’s Star in the first place? A short cosmic distance away—1,000 Astronomical Units, or 1,000 times the distance from the Earth to the Sun—Tabby may have a companion star, perhaps half its size, explains Metzger. “It’s possible that outer star is giving periodic gravitational kicks to the planets around Tabby’s Star,” he says.

The Dyson Sphere still remains a hypothetical contender in the endeavor to explain Tabby’s mystery. But Metzger believes that Tabby’s Star might not be so rare. The Kepler telescope, which found Tabby’s Star, only looked at 100,000 stars in a small part of the sky, which is not too many, he says. But if all the stars in the galaxy, or beyond, were observed, millions of other planet-consuming stars might be found that also produce this curious light-dimming effect.

Otherwise, says Metzger, “You would have to believe that there are a million other alien civilizations assembling Dyson Spheres right now.”