Scientists catch a Neptune-style orbiter by its very long tail 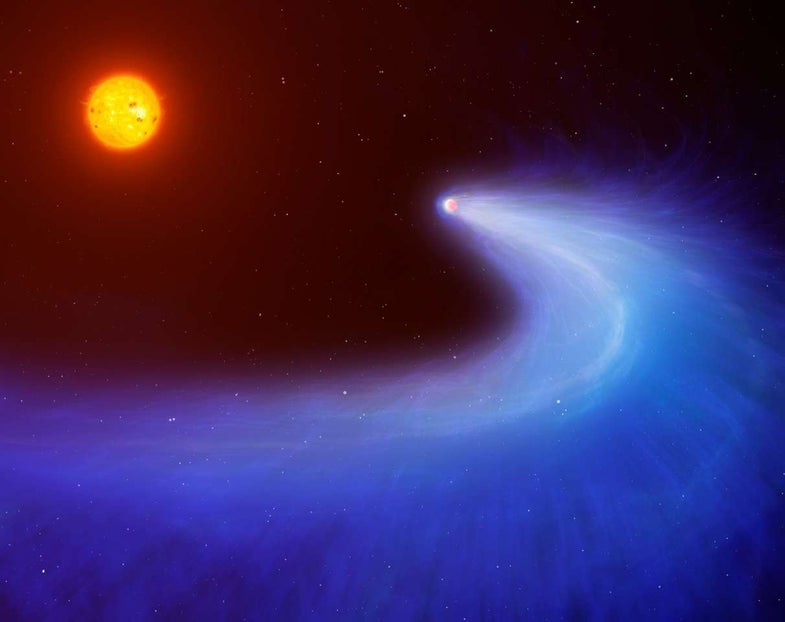 Some planets that are now small, hot, and rocky may have started off as icy giants like Neptune. Orbiting too close to their stars, their gassy shells boiled off until all that’s left is a rocky core. That’s what scientists have thought for a long time, anyway. Now, for the first time, they’ve spotted a small exoplanet that seems to be in the process of evaporating. The boiling atmosphere of the Neptune-sized GJ 436b is creating a tail that’s nine million miles long and about two million miles wide.

The first known planet to have a tail is small by astronomical standards—“just” 23 times more massive than Earth. It orbits extremely close to its star—about 13 times closer than Mercury is to the Sun. These two factors add up to bad news for GJ 436b’s atmosphere. The extreme heat and harsh X-rays from the star fry it, while the planet’s relatively low gravity means it can’t hold on to the hydrogen in its atmosphere. As a result, GJ 436b is losing its atmosphere at a rate between 100 and 1100 tons per second.

The scientists spotted the planet’s tail using the Hubble Space Telescope. Watching the exoplanet cross in front of its star a few times, they noticed that ultraviolet light from the star dips a few hours before and several hours after the planet passes. They concluded that the dip is caused by a cloud of evaporated hydrogen that’s traveling along with the planet.

The cloud itself is probably not all that extraordinary for an evaporating planet. Rather, the scientists probably had an easier time spotting this one because the host star is so small.

“The red dwarf star does not produce enough light to blow away the material quickly,” said study co-author Peter Wheatley in an email, “and it doesn’t produce as much X-ray light that ionises the material, which would also stop us seeing [it]. This is why we see such a large comet-like tail.”

Kepler-78b, lovingly nicknamed “The Hell Planet” because of its extreme heat, is thought to have lost its atmosphere in a similar way. There are lots of others, and the study authors think that more than 10,000 others could be discovered by upcoming exoplanet-hunting missions from NASA and the European Space Agency.

As for GJ 436b, this one won’t probably won’t be “evaporated to destruction,” as Wheatley puts it. Although it’s losing literally tons of mass every second, that’s nothing compared to the gas giant’s total mass.