I is for interstellar. 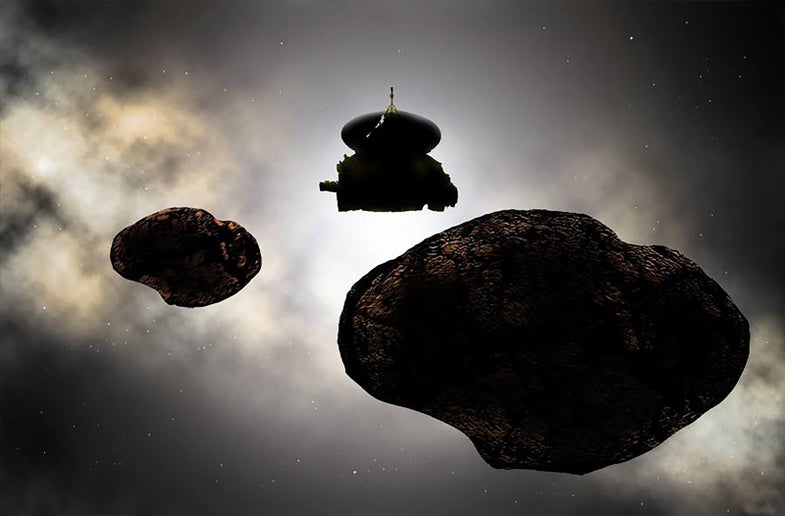 What’s in a name? An asteroid by any other name would smell as singed—and would still be a rock orbiting the sun on some far-flung journey.

But we have to keep track of all those asteroids, comets, minor planets and planetary features somehow, and when trying to distinguish between various chunks of faint material out there in the solar system, having a specific name or reference point is a lot easier than saying “Hey, you remember that one asteroid from 1916? Whatever happened to that one?”

Having names to distinguish between individual comets and asteroids has become even more important as telescopes have improved, bringing into focus countless heavenly bodies that were previously beyond us. Naming took on an additional, sudden urgency just a few weeks ago, when a small dark object became the first known visitor to our solar system from somewhere outside of our sun’s sphere of influence.

Originally classified as a comet, than an asteroid, the visitor from elsewhere was given a temporary designation A/2017 U1. Normally, astronomers would keep studying the object through telescopes, working out the orbit until they felt they had a good handle on where it was coming from and where it was headed. They’d send that information to the International Astronomical Union (IAU), which would review the data, and if approved, give it a designation and a number as an asteroid or a comet, and everyone would move on with their lives.

But this is no ordinary object, and there wasn’t time to get as much data as astronomers might have preferred before offering an official designation.

“This is a tiny object—probably only a couple hundred meters across, so the time span over which we can actually observe it is rather short,” says Gareth Williams, Associate Director of the IAU’s Minor Planet Center (MPC). “People who wanted to look at it to determine physical characteristics really had to look at it within a day or so of discovery. Within a month, it will be too faint for even telescopes like Hubble to see it. ”

But despite its small size, people at the IAU felt that the first observed visitor to our solar system should have a name, and that they should have a plan in place for objects that came after it. That’s why this week the MPC announced a provisional designation for the little space nugget. A more formal plan for naming the next interstellar visitor will come later.

After toying with the designation ‘E’ for extrasolar (doesn’t sound as awesome as the other options) and ‘G’ for Galactic (what happens when something from outside the Galaxy drops by?) they settled on ‘I’ for Interstellar, which would join the burgeoning ‘A’ for asteroid and ‘C’ for comet classifications.

But the selected designation—1I/2017 U1—doesn’t exactly roll off the tongue, even if it is semi-official. An object of this significance warrants another, more common name for public discourse.

If the object was a comet, it could unofficially be named after its discoverer, and if it was an asteroid, that individual could choose a name—within reason (we’ll get back to this).

The name, selected by the team that first discovered the object, is Hawaiian: ‘Oumuamua. The researchers say in the MPC statement that it “reflects the way this object is like a scout or messenger sent from the distant past to reach out to us (ʻou means reach out for, and mua, with the second mua placing emphasis, means first, in advance of).”

No, you can’t name it Asteroid McAsteroidface

But ʻOumuamua isn’t the only thing getting a new identity. NASA is currently soliciting name suggestions for the distant Kuiper Belt object that New Horizons will fly by on New Year’s Day 2019.

Suggestions so far include nuts, mythological creatures, fictional cities, and landforms from here on Earth. Yes, you can try to write in something ridiculous, but there’s a team of people weeding through the 10,000+ submissions to determine which ones go on the ballot.

So, for anyone who thinks they’re being clever with their Rocky McRockfaces, or their Kuiper McAsteroidfaces. . . “Rest assured we have those ideas, and we’re probably not going to use them,” laughs Mark Showalter, a senior research scientist at SETI running the naming campaign.

Showalter is looking to get the public involved and excited about the new phase of New Horizons, but for some reason, planetary scientists also just all that aren’t interested in calling the object MU69 for the next 14 months or so.

“If we’re going to be talking about this object for years, then MU69 doesn’t roll of the tongue,” Showalter says. “It’s a license plate, and who talks about their car by the license plate? Humans like naming things.”

Breaking down the license plate

The formal designations do look a little (or a lot) like license plate numbers, but each of the letters and numbers does actually mean something. Let’s take the New Horizons target for an example. Its official designation is (486958) 2014 MU69. That might seem like a confusing label, but when it’s all broken down it starts to make a lot more sense. Let’s take it bit by bit:

486958 This is the official designation in the Asteroid system, which vastly outnumbers comets at over 300 members, and interstellar objects (which only have one). This part is easy: it’s the 486,958th asteroid to be officially recognized by the IAU.

2014 This one is also pretty straightforward; 2014 is the year scientists first observed the object with a telescope. Williams says that sometimes, it might be years before someone notices that a telescope has captured something interesting in some image or another. In that case, they still go by when the telescope imaged it, not when the astronomer noticed it.

M This part seems a lot less straightforward, at least for folks outside the astronomy world. To get even more accurate on the timeline, astronomers divide the year up into half-month chunks of time. January 1-15 is A, January 16-31 is B, etc. They skip I and Z. They captured images of this object in late June 2014, which is labeled as M.

U Here’s where it really weird again. Each object discovered in one of those roughly-two-week stretches of time is placed in a list and labeled as such: A for the first, B for the second, and so on. (They skip I again.) This one’s down to U, but there’s an important qualifier. . .

69 The 69 is officially written as a subscript. When astronomers get to 25 asteroids in a month, they start the alphabet all over again—adding a subscript of 1 for the first time, 2 for the second, etc. Scientists had to do this 69 times in the good old MU portion of 2014 before spotting this particular object—it was the 1745th comet discovered in that 15 day segment. Nice.

But even that isn’t enough specificity. Asteroids that get more human names are divided into a strict set of themes based on the way they orbit around the sun. “You can’t name it after your cat, or your wife, or your mother-in-law,” Williams says.

The USGS keeps a record of the themes settled on by the IAU Gazetteer of Planetary Nomenclature.

For example, take a look at Jupiter’s requirements—which help pinpoint not only that an object is one of Jupiter’s satellites, but also helps indicate the direction of its orbit:

MU69’s official name, whenever it eventually gets proposed to and approved by the IAU, will need to be related to a creation myth on Earth. But Showalter and others are still casting a wide net in the meantime.

“Somewhere out there some one has the perfect name for the object on the tip of their tongue,” Showalter says. “All they have to do is type it in.”