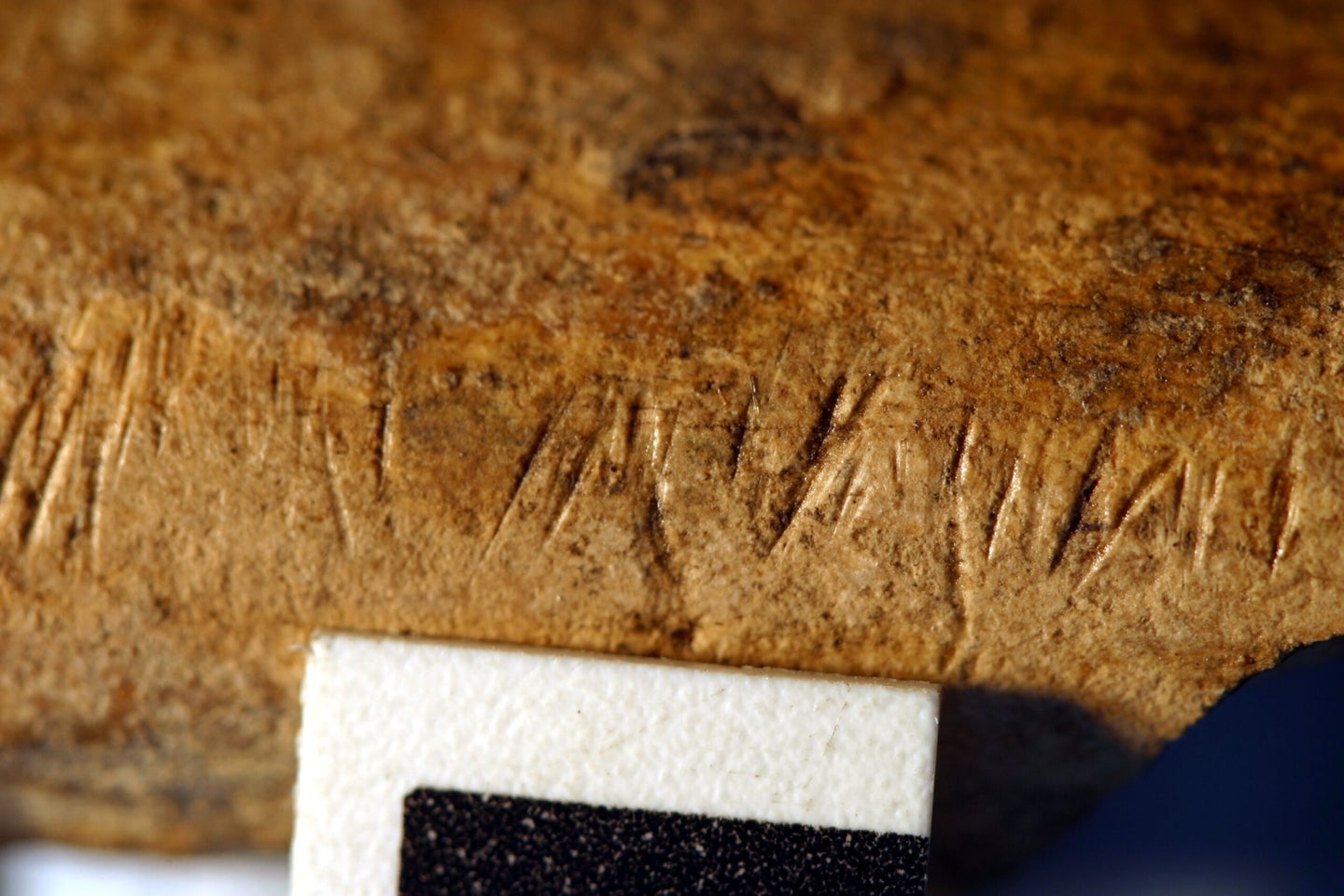 A fossil with cuts made by early hominid tools from Koobi Fora, Kenya. Briana Pobiner
SHARE

The oldest evidence of Homo erectus comes from an arid hillside near the border of Ethiopia and Kenya. Though the 1.9-million-year-old fossil is only a tiny shard, more complete, if more recent individuals show that the species looked recognizably human. The species had long legs and short arms. Its face was flat, without a chimp-like snout. Behind that face was a hefty brain, bigger than that of any of its predecessors.

The question, then, is what forces shaped H. erectus, and further down the line, its descendant Homo sapiens.

One popular theory has it that a meat-heavy diet allowed H. erectus to invest in its brainpower. But a new report casts doubt on the basic evidence to support the idea.

The theory that a meaty diet allowed human brains to develop is sometimes called the “meat made us human” hypothesis. “One of the leading ideas is that if you switch from a plant-based diet towards a diet that’s rich in protein and fat, like eating meat and bone marrow from carcasses, you have the energy you need to feed a larger brain,” says Andrew Barr, a paleoanthropologist at George Washington University, who studies the environment of early human evolution.

Meat-eating could explain another feature of H. erectus: its dainty, human-like digestive system. The guts of other apes are shaped “almost like a skirt,” says Briana Pobiner, a zooarchaeologist at the Smithsonian’s Museum of Natural History, “with a small top and a wide bottom. A modern human’s is like a slim skirt as opposed to a wide skirt.”

For decades the theory’s proponents pointed to physical objects for support. “The archeological evidence has lined up with this,” says Pobiner. “In the 1980s, archaeologists started finding butchery marks on fossil bones in East Africa, and going, okay, early humans were eating these animals.”

Plenty of other apes eat meat—chimps even use basic tools to hunt—but the proliferation of butchered bones suggested that perhaps, H. erectus or its close ancestors had become more skilled carnivores.

But that evidence isn’t what it appears, according to a new study co-authored by Pobiner and Barr, and published in the journal PNAS. There is an explosion of recorded butchered bones and stone tools after 1.9 million years ago, when H. erectus was wandering around—but it appears to be because anthropologists have excavated more sites from that period.

“We definitely see an increase in the number of cut-marked bones,” says Pobiner. “But what we were trying to figure out is: is that a real behavioral signal? Or is it just that you get more cut marked fossils if you pull more fossils out of the ground?”

[Related: Is it time to change the way we talk about human evolution?]

To get an overhead view of the evidence, the team went back to sites dating to 2.6 million to 1.2 million years ago, and counted the number of fossils and the number of butchered bones.

If the theory were true, they would have seen a higher proportion of cut bones after the emergence of H. erectus, say from 10 percent to 50 percent. Instead, the proportion of butchery didn’t change with time—sites with more bones just had more butchered ones, as well. That suggests that earlier hominids were also chopping up meat, but contemporary researchers just haven’t found as many bone stashes from that period.

“After Homo erectus, there’s been a lot of intensive research activity on finding these smoking guns of human carnivory,” Barr says. “Whereas prior, there’s less research effort. Our study shows that it is influencing how much evidence is available.”

The lack of pre-H. erectus fossils is also related to a quirk of geology, says Barr: The rock containing the pre-H. erectus period tends to be less accessible. “We’re at the whim of mother nature and Earth’s crust in terms of what sediments are easily exposed at the surface.”

The study doesn’t fully disprove the “meat made us human” idea. Future sites could find that earlier hominids weren’t eating much meat. The available evidence just doesn’t say one way or another.

“The study shows us that sometimes in science we need to look even more critically at data sets that fit our preconceptions and expectations,” says Peter Ungar, an anthropologist at the University of Arkansas who has written extensively on the role of diet in human evolution, and wasn’t involved with this new research. “The results underscore the fact that the story of human evolution is too nuanced and complex for simple answers to the question of what made us human.”

[Related: How to build the best cooking fire right on the ground]

Other possibilities that could have given our brains more fuel include technological shifts, like cooking, that unlocked extra nutrients. Social changes, like elders foraging food for young children, could have contributed.

Ungar cautions against latching on to any one theory. “I do not think that ‘fire made us human’ or ‘stone tools made us human,’” he says. “But all of these things are part of the story of increasing access to a broader variety of foods to fuel our ancestors’ bodies given ever-changing conditions.”

H. erectus is also the first hominid to have unambiguously left Africa—the first fossils were found in Indonesia, and it’s possible that it evolved somewhere in Asia in the first place. H. erectus wasn’t a specialist. Like us, it was probably shaped by its ability to live through massive changes.