Meet the wee, multilegged chefs behind the world's most sought-after loaves. 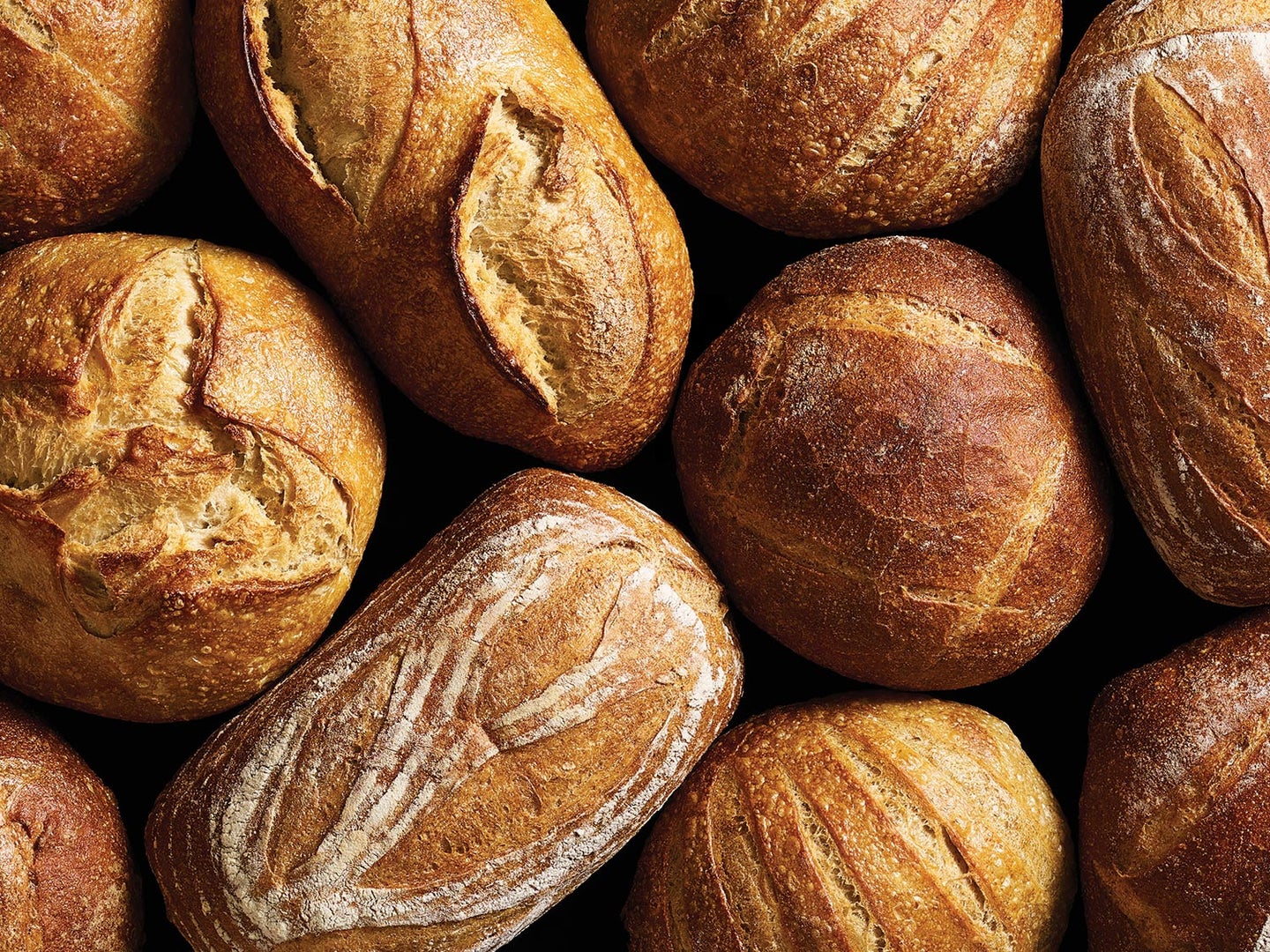 It’s easy to get a rise out of a local TV news crew. Especially in a slo-mo state capital like California’s. So it was on September 6, 2007, when KCRA’s LiveCopter 3 hovered over a Sacramento parking lot, at 8:23 a.m., beaming images of a slow-­moving red van, tailed by a black-and-white police cruiser. As soon as the van pulled over, a man in a white baker’s cap popped out. Instead of making a run for it, which is how you expect these things to play out, he labored up to a reporter’s microphone, arms weighed down by bread dough. “It’s about 40 pounds,” he said. A crowd of bystanders cheered.

The Boudin Bakery in San Francisco, the city’s oldest and one of the best-known purveyors of its famous sourdough bread, was delivering a key piece of its history to its newest outpost. Since 1849, the bakery has relied on a bacteria-and-yeast-rich “starter”—a small amount of dough that bakers regularly “feed” by adding flour and water—to breed the living organisms that make the bread rise and give sourdough its tang. Properly cared for, a starter can birth bil­lions of chewy loaves across decades and even centuries.

The predominant bacteria in sourdough is called Lactobacillus sanfranciscensis. It’s a species that produces lactic and acetic acids, which give sourdough its distinctive and nominal flavor. For decades, foodies believed, as did Boudin’s bakers and others, that the city’s fog and temperate climate helped foster these microorganisms. As it turns out, they may come from insects.

In July 2017, baker Ian Lowe responded to a bit of news that revealed an unusual connection between bugs and bread, and that had attracted his community of sourdough devotees: “It’s time bug shit got its due,” he told his more than 28,000 Instagram followers.

Each year, some 50 or so bakers from around the world visit Lowe at his Apiece bakery in Launceston, Tasmania, to study his sourdough-baking techniques. Lowe—who has read extensively in plant breeding, microbiology, milling science, and oven thermodynamics, and taught himself basic chemistry, biochemistry, and molecular biology, to better understand the microbiome of his favorite food—posts his exacting recipes in a public Dropbox file for all to share. That week in July, Lowe had read a newly published microbiology paper that showed, more than 40 years after scientists identified L. sanfranciscensis in sourdough, that the bacteria live inside insects that inhabit wheat fields and grain storehouses. It makes sense that bacteria that can thrive in the fermenting plant material “would be something that’s part of the ecology of the grain,” Lowe says. They must all share regional origins and thrive in a temperate range—between 65 and 80 degrees Fahrenheit. Although as a nonscientist Lowe had no way to prove it, his studies and his life’s work had led him to reason that the insects’ guts must be perfect vectors for the necessary microorganisms of fermentation.

These insects have been eating the grain humans put aside for millennia. Now it seems they may have played a culinary role in feeding our ancestors. Thousands of years ago, Neolithic cultures planted fields of wild wheat, such as einkorn and emmer, then crushed their grains and mixed them into water to make a porridge. Some baked it on hot stones as flatbread. No one knows where it happened, but around 6,000 years ago, a careless cook must have left porridge out overnight and noticed the next day that it had bubbled up. Fermentation! Stuck in an oven, it plumped and produced what we now know as chewy, aromatic, and life-sustaining bread.

Who knows if this Ur-bread was sourdough, but eventually that genus of daily carb spread through the Middle East and Europe, becoming a nutritious staple for much of Western civilization. The process was simple. Start with flour and water. Let it ferment for a few days, regularly adding more flour and water and keeping the mixture warm enough to allow the wild yeasts and lactobacilli on the grain to do their job—bubbling with gas and thickening. Then add a chunk of this starter to a dough of more flour and water, let it sit for several hours, then pop it in the oven and bake to goodness.

RELATED: How to make a sourdough starter—and keep it alive

No one could actually account for the mysterious internal reactions of starter until the mid-19th century, when Louis Pasteur determined that yeast was a microscopic living chemist that turned sugar into alcohol and gas. That soon led to the invention of concentrated baker’s yeast, which trimmed the labor-intensive bread-making process from days to mere hours. It also yielded a monoculture fermentation of dough, with less biochemical and nutrient diversity. That ushered in the flavorless, mass-­produced product that sits on supermarket shelves today, full of dozens of multisyllabic thickeners and additives. In Europe, Old World bread-making practices, which require specialized skill and patience, endured even amid the onslaught of the quick-fix, packaged stuff. But starting around the 1990s, the artisanal movement in the United States saw chefs rejecting baker’s yeast and commencing an obsession with sourdough and the live starter required to make it.

Even so, among bakers and researchers who study food, “the origin of sourdough microorganisms is somewhat of a mystery,” says Anne Madden, a postdoctoral researcher at North Carolina State University who calls herself a microbial strategist. Madden and her supervisor, ecologist Rob Dunn, are part of a global yet small club of researchers trying to solve the mystery. Their Sourdough Project has collected more than 550 specimens of live starter from around the world—some of them handed down through generations—in an attempt to catalog the microorganisms that populate them.

The first to try to crack the mystery of San Francisco sourdough were T. Frank Sugihara and Leo Kline, a pair of microbiologists working in the Bay Area in the 1970s for the U.S. Department of Agriculture. At the time, bakers swore that no one in the country could reproduce the tangy food more than 50 miles away from the city, and that starters transplanted to other places would rise but usually lose their sour flavor. In their landmark studies, the pair found that yeast and a bacteria that would later be dubbed Lactobacillus sanfranciscensis, after the city known for sourdough, worked together to make dough rise and taste good.

A sourdough starter is an ecology primed for these two complementary players, with lactobacilli outnumbering yeast 100 to 1. Enzymes inside the flour break starch into the malt sugar known as maltose. But sourdough yeast cannot metabolize maltose. It snacks on other sugars in the dough instead, cutting them down to make simpler variants such as fructose and glucose, and porting them into the fermentation pathways that extract energy. When they’re done, what’s left over is a tiny scrap of ethanol and the carbon dioxide that puts rise in your dough. Meanwhile, lactobacilli chow down on the maltose and release flavorful acids as waste.

In sourdough, yeast and lactobacilli work as a team. But nobody knew where lactobacilli came from. Bakers didn’t add the stuff, and other foods that used the same ingredients lacked its distinctive flavor element. Scientists began looking for and finding it in starter doughs in Germany, France, and Italy—all places with a rich sourdough history. Many people, including microbiologists, believed it came from bakers’ hands. But Claudia Picozzi, an assistant professor at the University of Milan, was working on an alternative idea.

Up to that point, says Picozzi, “no one was able to detect the microorganisms in the grain or flours” used for making sourdough. Then one of her colleagues thought of insects. Or, rather, their guts. “Several lactic-acid bacteria and yeasts have intestinal origin,” says Picozzi, explaining her thinking. “And since many insects live on cereal grains and infest flours for baked products, we thought we probably could trace the origin.”

So she and some colleagues set about scooping the poop of several species (among them the charmingly named confused flour beetle) that infest grain and flour stores. After sequencing the DNA inside the pests’ poop, they published their findings in the Journal of Applied Microbiology with the helpful title: “Insect frass in stored cereal products as a potential source of Lactobacillus sanfranciscensis for sourdough ecosystem.” It turns out, there’s lots of bacteria in bug poo. The researchers found more than 130 species. Lactobacilli made up only 0.36 percent of that total. But the most common was Lactobacillus sanfranciscensis.

So why did a minor player in the insect gut dominate in dough? One reason for its success, says Francisco Migoya, head chef at Modernist Cuisine, the science-of-cooking lab in Bellevue, Washington, is ecological. “It is basically creating a poison, so the other bacteria are going to die,” says Migoya, who co-authored the five-volume Modernist Bread: The Art and Science. By changing the environment it lives in, Lactobacillus sanfranciscensis outcompetes its neighbors and, as a result, it influences sourdough’s flavor.

Studies like Picozzi’s don’t just solve nerdy baking trivia questions. They also offer real-world applications to both artisanal and industrial bread-​­making. “Such knowledge can help us design breads with better flavors and ones that are healthier for us,” says NCSU microbiologist Anne Madden. One of her projects examines the microbes that partner with insects such as wasps and bumblebees. She and her colleagues have found new yeasts on these winged field inhabitants that she hopes “can make breads with useful traits.”

Madden’s mentor, Rob Dunn, who runs an ecology lab at the university, says bugs are likely not the whole story. Further DNA analyses might turn up other cooks in the microbial kitchen. “The story has many pieces,” he says, “one of which might be insects, but so too the body of the baker, the air of the bakery, the grain in the field, the microbes in the soil.”