Eating Cooked Food Made Us Human

Raw food takes too long to digest and offers too few calories to grow a human brain. Cooking it is the key. 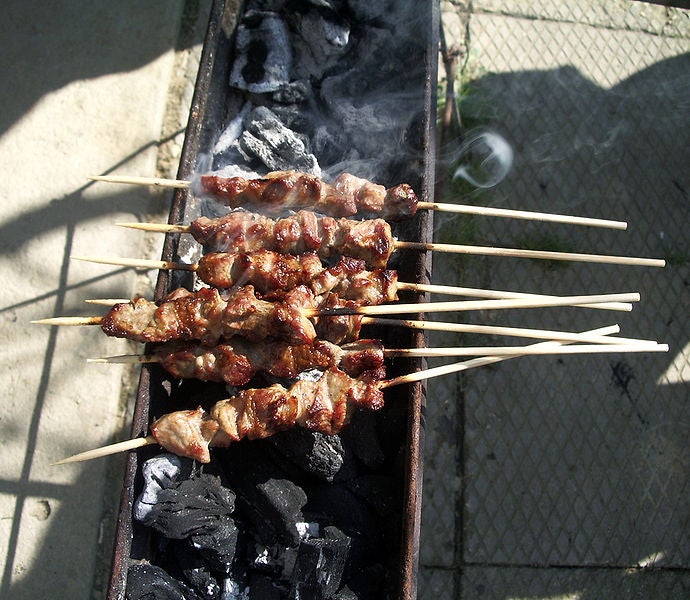 Gathered around a blazing fire, our ancient ancestors probably huddled to pass the archaic kebab, munching cooked meat and figuring out how they might share it and plan to get more of it. Eating cooked food allowed these early hominids to spend less time gnawing on raw material and digesting it, providing time–and energy–to do other things instead, like socialize. The strenuous cognitive demands of communicating and socializing forced human ancestors to develop more powerful brains, which required more calories–calories that cooked food provided. Cooking, in other words, allowed us to become human.

A new paper examines the metabolic restrictions of a raw diet, and suggests that our primate cousins are limited by their inability to heat their dinners. It bolsters the cooking hypothesis of Richard Wrangham, a primatologist and professor of biological anthropology at Harvard who believes cooking is our legacy.

Brazilian biomedical scientists Karina Fonseca-Azevedo and Suzana Herculano-Houzel note that the largest primates do not have the largest brains, a perplexing question. Encephalization (a larger brain size per body size than you’d expect) has long been thought to be a key feature setting humans apart from other primates, and mammals as a whole, but there is no consensus on how or why this happened.

“We consider this disparity to be a clue that, in primate evolution, developing a very large body and a very large brain have been mutually excluding strategies, probably because of metabolic reasons,” the authors write. They’re the first to try and quantify these limits.

“You would think, ‘Surely people have thought about this stuff before,'” Wrangham said in an interview. “But nobody has ever thought about the fact that cooking gives you more energy.”

This is a central thesis of Wrangham’s 2009 book, “Catching Fire.” He argues that the control of fire allowed early hominids to not only cook their food, but obtain warmth, allowing them to shed body hair and in turn run faster without overheating; to develop calmer personalities, enabling social structures around the hearth; and even to form relationships among men and women–in short, to become human.

“My day job is studying chimpanzees in the wild, and I have often studied feeding behavior. I have tried to survive on what chimps eat,” he said.

“If I don’t have any food with me, I just eat what they eat. And that told me that what they eat is totally unsatisfying,” he continued. “I thought about what would happen if humans had to live like chimps. And that took me very rapidly to the conclusion, within a few minutes, that as long as we’ve been human, it’s hard to imagine how we could live on raw food.”

Wrangham’s ideas follow the expensive-tissue hypothesis. That concept predicts an inverse relationship between brain size and gut size–to accommodate a large, human-sized brain, our guts shrank relative to our primate cousins. Imagine the pot belly of a gorilla, Wrangham notes. This paper doesn’t even address gut size, just the requirements of our hungry brains.

“In order to be able to apply a sufficient number of calories to the brain, you have to be able to cook your food,” Wrangham said. “You can only afford to have a brain if you can supply a lot of energy to it.”

The idea is that raw food just doesn’t provide enough calories. You have to get out more than you put in, and raw food takes a lot more work (meaning calories) for your muscles and organs to chew and digest, resulting in a net decrease in the amount of calories available for the rest of your cells. But you can only spend so many hours of the day eating–there must be time to sleep, forage and procreate, too. This limits the amount of calories you can get per day, and it turns out this is directly related to how many neurons you can grow, according to Fonseca-Azevedo and Herculano-Houzel.

The duo crunched numbers to figure out the metabolic costs of a human-sized brain, which is the third most energy-expensive organ in the human body, ranking below only skeletal muscle and the liver in terms of metabolic needs. The more neurons the brain has, the more energy it needs. If we ate an only-raw diet, to maintain the body size we humans possess, as well as the number of neurons our brains possess, people would have to eat for more than 9 hours per day, they found.

Like Wrangham, the authors also see a feedback loop in the history of feeding. Along with increasing the efficiency of our food intake and eliminating limits on growth, eating cooked food would have increased the time humans could spend around the fire, time spent together. Socializing, along with other “cognitively demanding” activities–like developing speech, social structure and civilization–would have required more brain power. And humans could afford to develop these more powerful brains, thanks to their improved, cooked diet. This positive feedback drove the rapid increase in neurons that took place in human evolution, the authors say.

It makes perfect sense, if you think about it. Cooking does some of the work of digestion for us, as Wrangham puts it.

“Molecules are moving faster under the influence of heat; they are breaking up or shaking apart from each other, and that’s essentially what happens in digestion, the denaturating of proteins,” he said. “They lose their structure, and become more accessible.”

As an example, he and others have investigated the effects of cooking on starch molecules and humans’ ability to digest cooked versus raw grains. Simply cooking starchy foods increases the net energy gain by 30 percent, he said.

“The grains themselves represent long chains of glucose, which are very difficult to digest until they have been gelatinized; you are opening up these chains,” he said. Take, for example, a simple white sauce of flour and butter. You have to stir constantly over even heat, letting the water in the butter invade the starch molecules in the grain. “Then you get this change in consistency, where the whole thing becomes a continuous colloid, and the starch grains have become gelatinized. The result is that it will be easier to digest,” Wrangham said. “Our body pays fewer calories for the digestion.”

Although this paper doesn’t address the raw foodist culture directly, Wrangham does, arguing that humans are not adapted to eating raw food. Subsisting on raw foods is a hugely effective way to lose weight, which in and of itself suggests that it’s not enough for healthy development. Your body needs more calories than it is consuming, so it starts consuming your fat reserves as a supplement.

“If you want to lose weight, a raw food diet is the best thing you can do–it’s very well-balanced in vitamins, and well mixed in terms of macro nutrients. But you have to be careful … the evidence is pretty strong that it would be really dangerous to bring a child up on a raw diet,” he said. “Partly for that reason, I’m delighted to see this paper that emphasizes the importance of cooking for the evolution of the brain. I hope it will deter people who are overly enthusiastic about their raw food diets.”

The paper is published today in the Proceedings of the National Academy of Sciences.