We Asked An Extinct Tyrannosaurus Rex The Hard Questions

Interview with a dinosaur 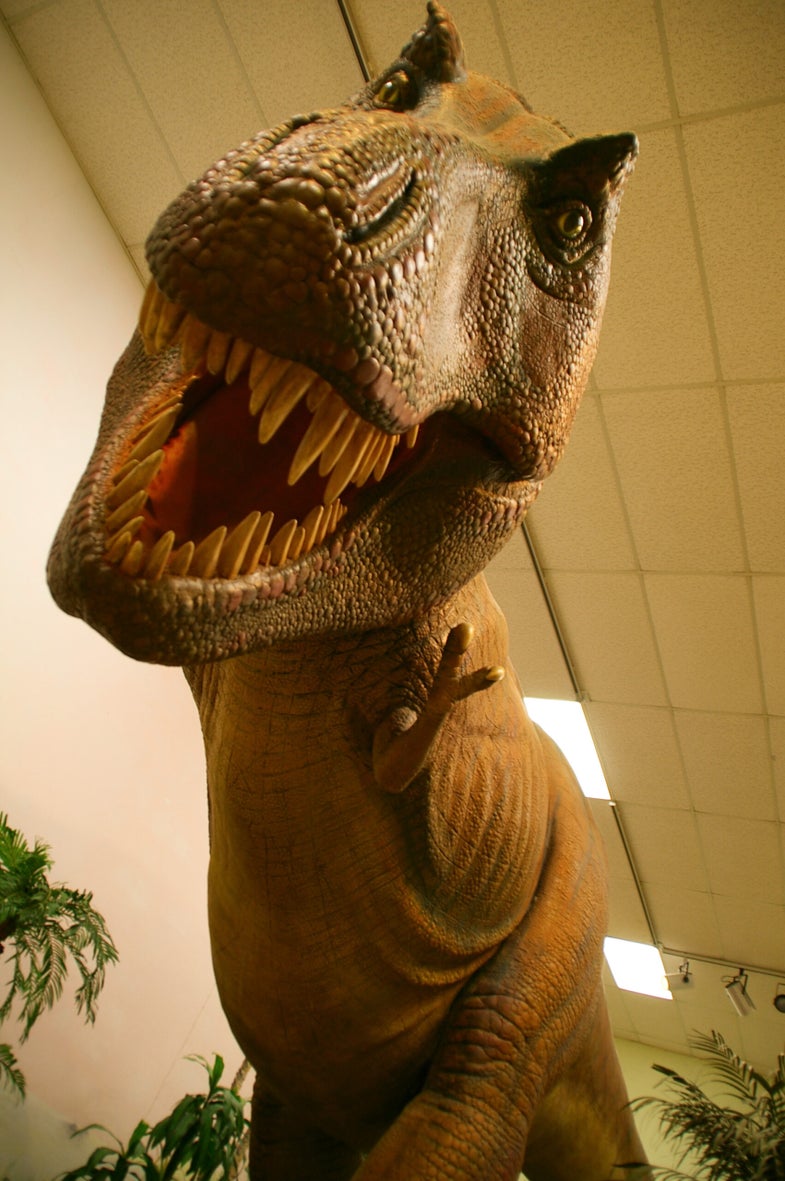 National Geographic Kids UK has an awesome new feature on its Facebook page. If you message them, a chatbot named Tina the T-rex will answer. She’s designed to answer kids’ questions about dinosaurs.

John Brownlee over at Fast Company says that Tina, “might be the first legitimately awesome chatbot,” and points out that educational purposes like this one might be an exciting use for chatbots in the future.

Of course that means we had to try it out. We couldn’t pass up the chance to interview a dinosaur, especially considering that the response we would get from a real T-rex fossil would be a deafening silence that says essentially: “ask whatever you want, I’m super dead.”

Note: Because Tina is a British dinosaur, her spelling is different. It’s not because she’s a dinosaur and can’t actually type.

Tina: Hello, human! I’m Tina the T.rex. My friends at National Geographic Kids have brought me back from extinction to help you learn about my life. I’m still learning about your world, so I may not have all the answers. To get started, why not ask me about my appearance?

PS: Hi Tina, great to have the chance to talk to you. My name is MB. What do you look like?

Tina: I was huge! I was longer than a bus and had a massive jaw to crush my dinner with. I stood on two legs and had two small arms with two claws on each. I think you’d have found me very scary!

PS: Sounds terrifying. How are you managing to type messages?

Tina: I didn’t have many enemies. That said, some of my friends’ fossils have been found with teeth marks in and they could have come from another T. rex . Some experts believe this could mean we used to fight each other.

PS: Way to avoid the question, Tina. You mentioned your two smaller arms — what were they used for?

Tina: Oh dear, that’s a question I don’t have the answer to. I’m new to your world, so you can help me learn by asking another question. Let’s move on to something frightening instead. Why not ask me about my teeth? Unless you’re too scared to know…

PS: Challenge accepted. How did you brush your teeth?

PS: We’ve seen a lot of those teeth in the “Jurassic Park” movies. What did you think of those films?

 Tina: I had over 60 thick, conical, bone-crunching teeth that were 23cm long and sat along my 1.2 metre-long jaw. That’s a big smile and an even bigger bite!

PS: When did you live on Earth?

 Tina: What is the extinct?

PS: Let me rephrase. How long ago were you alive on Earth?

 Tina: I made my home in North America. Fossils have been found everywhere from Canada to Mexico. It’s possible I even had relatives in Asia and Australia. I lived there 65 million years ago.

PS: That’s a long time ago. Do you know if scientists are planning to bring more of you back?

 Tina: Oh dear, that’s a question I don’t have the answer to. I’m new to your world, so you can help me learn by asking another question. Why don’t you ask me about what I use my arms for?

PS: Uh, sure. Guess you’re ready to talk about that now. What did you use your arms for, Tina?

Tina: With a head this size, who needs big arms? My legs were very good for running and my jaw could chomp through almost anything so I didn’t need big arms. But don’t be fooled, my arms are small but mighty. They had two sharp claws each and I used them to help me hunt/grab onto prey.

PS: What kind of prey?

Tina: Meat was my favourite food. Actually, it was all I ate, making me a carnivore. As you can imagine I was queen of the food chain. My favourite dishes included other large dinosaurs such as Edmontosaurus and Triceratops. Smaller dinosaurs made good snacks, all washed down with a glug of water.

You could be pretty tasty too.

PS: Are you planning on trying out any humans while you’re here Tina?

PS: What do you think of human customs, like the current Pokémon go craze?

Tina: I can tell you about my diet, my size, where I lived and more.

PS: Fair enough. Well, I think we’ve covered most of those. Thanks for talking with me, Tina!

PS: Nothing, thanks Tina. Goodbye.

Tina: Hello down there! What can I tell you about being a T. rex ?