Your muscles are ready to run, whether you like it or not. 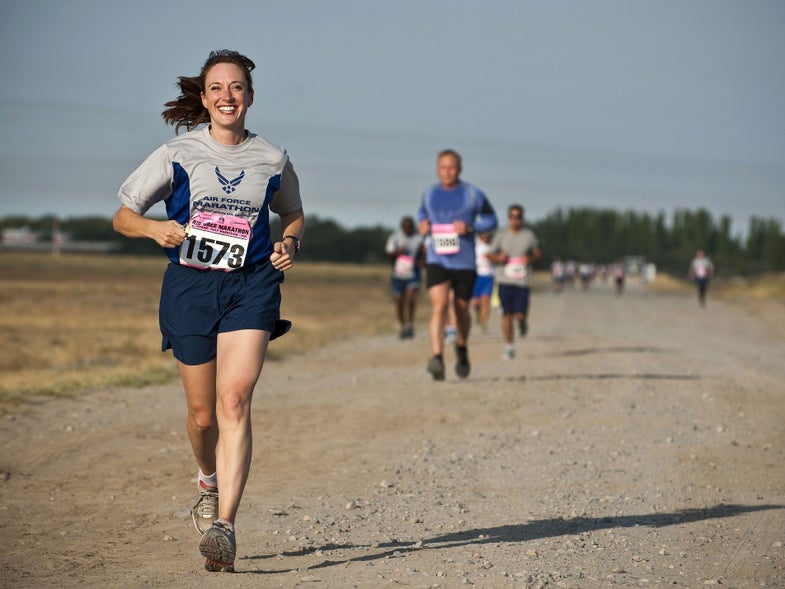 This woman looks too happy to be in so much pain!. Pexels
SHARE

Your cells are ready to run a marathon, even if you’re not. Every cell in the human body is carrying a mutation that might help optimize our muscles for running long distances, according to some recent research.

One of the oldest known genetic differences between humans and chimpanzees may have helped ancient hominids—and now modern humans—excel at running long distances. To understand how the mutation works, scientists examined the muscles of mice that were genetically engineered to have the mutation. In the rodents, having the mutation boosted oxygen levels to working muscles, increasing endurance and reducing overall muscle fatigue. The researchers surmise the mutation could be working similarly in humans. The results were published this week in Proceedings of the Royal Academy B.

Many physiological adaptations help make humans adept at long-distance running—the evolution of long legs, the ability to sweat, and our loss of fur all helped increase our endurance. With this new finding, researchers believe they’ve “found the first molecular basis for this unusual change in humans,” says Ajit Varki, a physician researcher in cellular and molecular medicine at University of California San Diego (UCSD) and lead author of the study.

The CMP-Neu5Ac Hydroxylase (CMAH, for short) gene mutated in our ancestors about two or three million years ago, when hominids were starting to leave the forest to forage and hunt across the expansive savannah. It’s one of the earliest genetic differences we know about between modern humans and chimpanzees, says Varki. Over the last 20 years, Varki and his research team have used mice to connect the mutation to other impacts on the human body as well, including more severe symptoms of muscular dystrophy and inflammation that can increase cancer risk from eating red meat.

“There have been a lot of genes identified relevant to running,” says Daniel Lieberman, a paleoanthropologist at Harvard who was not involved in the study and has extensively researched human evolution and running. “But this is the first gene that I know of that pinpoints a derived feature, a novel feature, that appears about the time we have fossil evidence for running.”

But not all researchers are convinced of the gene’s role in human evolution. Ted Garland, a biologist who specializes in evolutionary physiology at UC Riverside, warns that that connection is still “purely speculative” at this stage. “I’m very skeptical about the human side, but no question this is doing something to muscles,” he says. Just looking at the temporal sequence of when this mutation arose is not enough, says Garland, to say that this particular gene played an important role in the evolution of running.

The CMAH mutation works by altering the surface of the cells that make up the human body. “Every cell in the body is totally and absolutely covered with a massive forest of sugars,” says Varki. CMAH affects this sugar surface by coding for sialic acid. Because of this mutation, humans only have one type of sialic acid in the sugar forest of their cells. Many other mammals, including chimpanzees, have two types of the acid. This study suggests this change in the acids on the surface of the cells influences the way oxygen gets delivered to muscle cells in the body.

For this experiment, Jonathan Okerblom, a graduate student in Varki’s lab, used a control group of mice, with the regular gene coded for both types of acid, and a group of mice with the human-like mutation. The researchers compared how the mice ran on a treadmill before and after training on a wheel. Right from the outset, the mice with the CMAH mutation could run farther and faster than their normal counterparts. And with wheel training, their competitive advantage was even greater—running 12 percent faster and 20 percent farther than the mice without this mutation.

After the treadmill tests, Ellen Breen, a physiology research scientist at UCSD, examined the muscles of the mice and found those with the mutation didn’t fatigue as quickly as the muscles of the regular mice. Further, the rodents lacking the CMAH gene used oxygen more efficiently at the cellular level, and had more capillaries supplying oxygen to their soleus leg muscles.

How the mutation affects muscle endurance is interesting, says Garland, but we can’t assume this particular mutation was “essential” for humans to evolve into distance runners: “If this mutation had never happened, likely some other mutation would have happened.”

To prove the relationship between CMAH and human evolution, Garland says researchers would need to look at endurance in other animals, like dogs, deer, or ostriches, who all use their muscles to travel long distances, and see if they can find similar mutations influencing muscular endurance. He would also be interested in seeing the results repeated in mice specifically bred to have high levels of endurance to see if the effect holds.

Understanding how our body is wired for physical exercise could not only help us answer questions about our past, but also help us find new ways to improve health in the future, says Lieberman. Many diseases, like diabetes and heart disease, can be prevented through exercise. “We need to figure out how to marshal those pathways to help combat disease,” says Lieberman.

You don’t have to run a marathon to make the most of your cell-powered running abilities. To maintain proper overall cardiovascular health, the American Heart Association recommends about 30 minutes of moderately intense activity daily. But if you do feel inspired to test your physical limits, know that biology is on your side.