The weirdest things we learned this week: the best dog of all time, kindles of kittens, and mushrooms eating human corpses 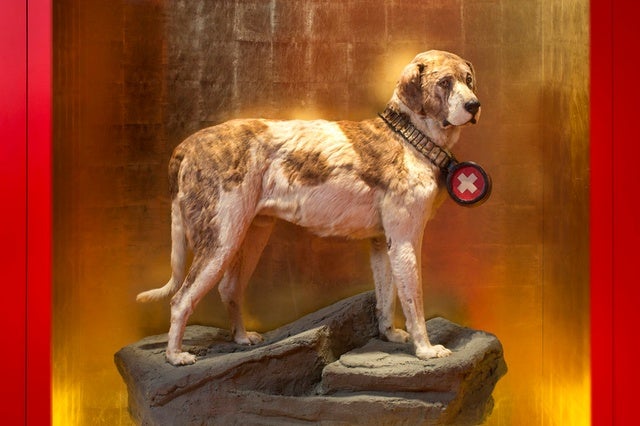 Fact: Barry was the Very Best Boy in the world

While reporting this story on how we harness the canine’s superior sense of smell for disaster recovery, I came across the story of Barry, a heroic pup who was among the first search and rescue dogs ever to serve—and a progenitor of the chubby, drooling St. Bernard breed we know and love today. In the 200 years since his death, Barry has become a Swiss icon, with dramatic tales of his most venerable deeds proliferating in movies, books, and the popular press. Much of the mythos around this good boy can’t actually be proven, but he is credited with saving the lives of 40 people, which is noble enough for me.

Today, Barry’s taxidermied body is on display in a Swiss museum (see it shimmering on display here, against what appears to literally be a gilded backdrop) and people from all over the world come to pay their respects. In the process of discussing Barry’s illustrious history, we talked about another taxidermied individual: philosopher Jeremy Bentham, the founder of utilitarianism, whose preserved head and stuffed bones reside in London to this day.

Fact: Everything is made up and the words don’t matter

You don’t expect to find James Lipton at the bottom of an internet rabbit hole about 15th century collective nouns—or then again, maybe you do. I realized after we stopped recording this episode that I also never really brought my story back around to my fact, so without totally spoiling the episode for you, here’s the key piece of info I leave out: James Lipton wrote a book called An Exaltation of Larks that revived a bunch of collective nouns invented by Medieval hunters in England.

I’m still working on figuring out how some collective nouns—like a pride of lions or a pod of dolphins—became sort-of-scientific. It may be that scientists who studied certain animals liked them enough to start spreading the usage, or maybe taxonomists had heard of some terms but not others. I’m just not sure. Whatever the reason, some of them are darned good. Here are a few that didn’t make it onto the pod:

If you want to read more about the original book of collective nouns, there’s a scanned copy of the Book of Saint Albans here, but be warned that Medieval English is harder to read than you might think. Far easier to decipher is the forward, written in 1881, which is interesting in and of itself.

Fact: There are mushrooms that eat meat (and you can have them break down your corpse, if you want)

Yes, mushrooms can be carnivorous. Fungi are mysterious creatures, more closely related to animals than to plants, and some of them have evolved to seek out nitrogen from animals instead of dirt or rotting wood. I find the oyster mushroom (Pleurotus ostreatus) an especially fascinating example, since this variety is tasty and safe for humans to eat—but is particularly devious in hunting its prey. Instead of physically snaring the tiny worms called nematodes it favors, the fungus produces tiny droplets of nematotoxin on its hyphae—appendages formed from the hair-like filaments of mycelium sent throughout the growth medium. As soon as a nematode passes through a droplet (which it is prone to do, given that the substance smells attractive to them) it freezes in place and remains paralyzed. Over the course of several hours or days, Pleurotus ostreatus will continue to grow its filaments. . . into the nematode’s body. The intrusion will eventually kill the worm, but the toxin itself won’t. Some researchers suggest this is to keep bacteria from descending too quickly, as they would butt in on the predatory fungus’s meal. Here’s a fascinating study describing the process.

Okay, so, could a mushroom eat a person? Not in the same way it eats a nematode; the tiny drops of toxin that stop a minuscule worm in its tracks would do nothing to a human, and you can just imagine how long one would have to lay in a pile of rotting wood chips—waiting patiently for death by mycelium—in order for tiny strands of fungus to rupture your organs from the inside out. Carnivorous fungi might break down the flesh of animals larger than nematodes for nutrients if given the opportunity, but they’re not going to hunt you down.

Yes, this sort of happened on an episode of “Hannibal” once. But the killer had to put his victims in a diabetic coma to keep them still enough for it to work. Also, it was kidney failure that killed them, not the fungi. If you want to feed a person to a mushroom, you’re better off waiting until they’re already a corpse. Speaking of which, a company called Coeio makes a funeral garment that utilizes oyster mushrooms (and other microbes) to break down human remains quickly and sustainably. But they don’t recommend eating mushrooms you find on top of a grave; those fruiting bodies may contain heavy metals and chemical toxins previously held in the corpse.